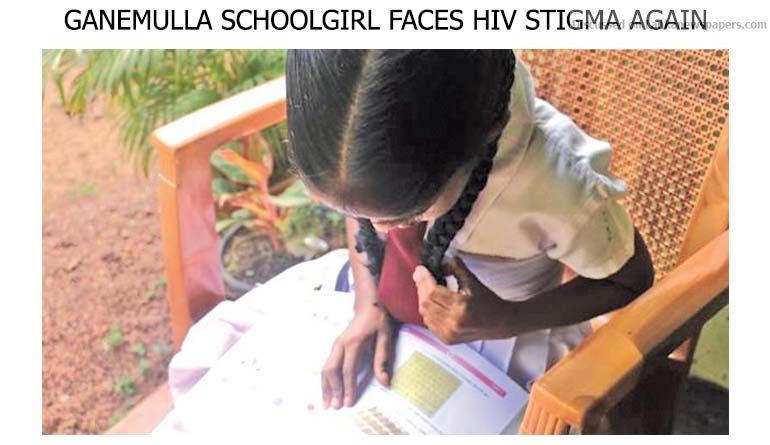 The ten-year-old refuses to go to school citing harassment by the school authorities again, after the Human Rights Commission and politicians stepped in to help last year

The 10-year-old schoolgirl from Ganemulla complained to President Maithripala Sirisena again last month, saying she continues to face harassment and stigma at her Government administered school, because her mother had been diagnosed as being HIV positive.

The harassment of this student made national headlines last year, resulting in interventions by the Human Rights Commission of Sri Lanka (HRCSL), educational authorities and Deputy Minister Ranjan Ramanayake, to dispel myths and false conspiracies about how the immune-deficiency disease is spread. On February 22, the little girl wrote to President Sirisena, complaining that the principal of her school was allegedly continuing to harass her, and on February 19 used a projector to highlight media reports about her story from 2017 to a schoolroom full of children. “I heard the children around me say, there they are showing her AIDS story again”, the little girl wrote in her letter to the President. She told President Sirisena in her letter that she was unable to go to school under those circumstances. Chairperson of the HRCSL, Dr. Deepika Udagama told Sunday Observer that there had been a meeting with the relevant parties on the matter recently and the Commission has observed certain internal contradictions and problems in this current situation.

The HRCSL had also made a similar intervention last year and ensured that the school does not harass this child including the Principal and parents or the other children, she said.

“When a similar situation arose last time, the Principal was made responsible to ensure that this child would go to school. But now there seems to be another dimension where the child now lives with her aunt and not with her mother,” Dr Udugama explained.

“As long as it’s a private issue and they do not want to send the child to school, we can’t intervene because our mandate is to only look at the executive or augmentative action that violates human rights,” she said.

On the other hand, Acting Director (Inquires & Investigations), Human Rights Commission of Sri Lanka, Nihal Chandrasiri said, the HRCSL which picked up the news from a series of newspaper articles, had initiated an inquiry for the second time recently, after intervening and resolving the matter in June last year.

“What we observed was that there was no clear problem within the school. The educational authorities are actually prepared to correct their mistakes and promise them to not harass her in future and go forward. But, it is a personal decision the child and her guardians have to make regarding her future with the school and whether or not she will attend,” he said.

But, according to the girl’s guardians, the school Principal’s decision last month to invite parents of other students and display publicly the previous media reports on the girl through a projector had caused intense humiliation for the girl again.

The new harassment began after the girl’s mother volunteered to participate in HIV/AIDS awareness programs to educate others about the disease and the stigma associated with it.

In a meeting with Deputy Minister Ramanayake at his home again last week, the little girl said other students refuse to play with her. According to the girl’s mother, who spoke to correspondents in the area confidentially, the Deputy Principal of the school had also asked other parents to take their children home to avoid contamination by her daughter.

“It is one thing for ignorant people to do this. But how can government officials violate a citizen’s fundamental rights in this way,” the schoolgirl’s mother complained.

Interventions by the HRCSL and Ramanayake had resolved the problem temporarily last year, but the harassment has now resumed, she added.

According to reports, some teachers in the school have disapproved the very act of replaying the previous media reports on the girl. The Teachers’ Union has also condemned the conduct of the Principal and urged the Education Minister to hold an inquiry.

In March last year, the child had first reported stigmatization by the school, her colleagues and parents of other children due to her mother being HIV positive.

The student’s family says, harassment and stigmatization at her school had caused great distress to the girl who was preparing to sit her Year 5 Scholarship examination this August. She regularly scores high marks and is also placed first in class, the family says.

Persons living with HIV/AIDS continue to face stigma and harassment, especially, in local villages where awareness about the spread of the disease remains low.

In 2016, a schoolboy in Kuliyapitiya faced similar harassment, after other parents refused to send their children to his school when rumours spread through the village that the boy’s parents were HIV positive. After high level interventions, school authorities were forced to readmit the student, but he was ultimately offered a place at Trinity College, Kandy after his story made headline news.

The immune-deficiency disease for which there is still no cure, is however completely manageable through anti-retroviral drugs and is no longer the death sentence it used to be.

Medication available to treat the symptoms of the disease is so advanced that HIV positive mothers are now able to give birth to children without having them contract the virus.

Medical experts insist that the disease can only spread through the exchange of bodily fluids and blood, and cannot be contracted through the air, touching or physical proximity.

On Friday, star cricketer Kumar Sangakkara took to Twitter to address this stigma and express his strong condemnation of the school authorities and called for the issue to be addressed swiftly.

“This needs to be addressed

and fast. Unacceptable if the girl or her mother or her family is being harassed.

Such a colossal lack of awareness from school authorities is deeply concerning,” Sangakkara tweeted.