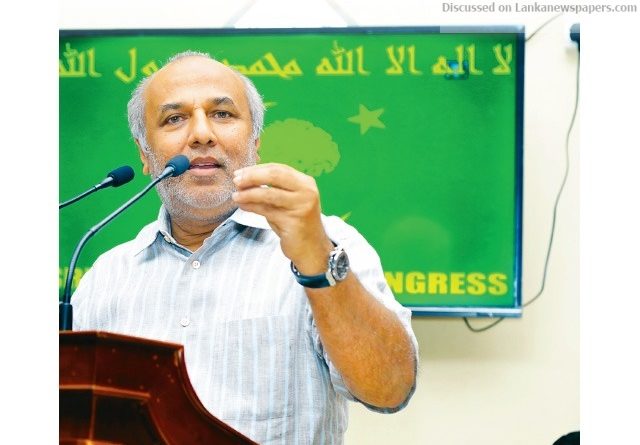 With Joint Opposition members being busy, mustering support from all parties to win the no-confidence motion moved against Prime Minister Ranil Wickremesinghe, the Sri Lanka Muslim Congress indicated it is running out of patience with its coalition partner, the United National Party.

SLMC Leader, Minister of City Planning and Water Supply Rauff Hakeem, after swearing in Local Government members elected from his party at Party’s Headquarters, Darussalam, on Friday evening (23) has said that he will be compelled to respond in a serious manner if the UNP continues to breach agreements reached before the LG polls.

“We have observed that the agreements we reached, on certain things during last three weeks, after having lengthy discussions with UNP leaders at Sirikotha, are not being implemented. In fact, we see the exact opposite being implemented. The SLMC, contested under the UNF in some areas and alone in our strongholds, following an agreement reached with the UNP. However, if the UNP keep on taking over powers in LG bodies by forming alliances with other parties, betraying us, we will find it difficult to continue this political marriage,” he added.

The SLMC leader also said that he asked the UNP leadership to appoint another secretary at Sirikotha, who could work cordially with other parties in the UNF coalition, apart from UNP General Secretary.

“If this too is ignored, we will have to take a tough action, we have already had discussions with the TNA and SLFP. We have also been approached by the Sri Lanka Podu Jana Peramuna. A final decision on forming alliances, with which parties and in what LG bodies, will be taken after Sunday midnight,” he added.

Meanwhile, backbenchers of the UNP, who are demanding for crucial party reforms, insisted their final decision on the no-faith motion will depend entirely on the decisions at the working committee meeting to be held on 29 March.

Several State and deputy ministers, when asked, said they will take a final decision on the matter after closely observing how the party leadership acts in reforming the party.

“We will act according to our conscience,” they said while indicating a possibility of abstaining from the vote on 4 April.