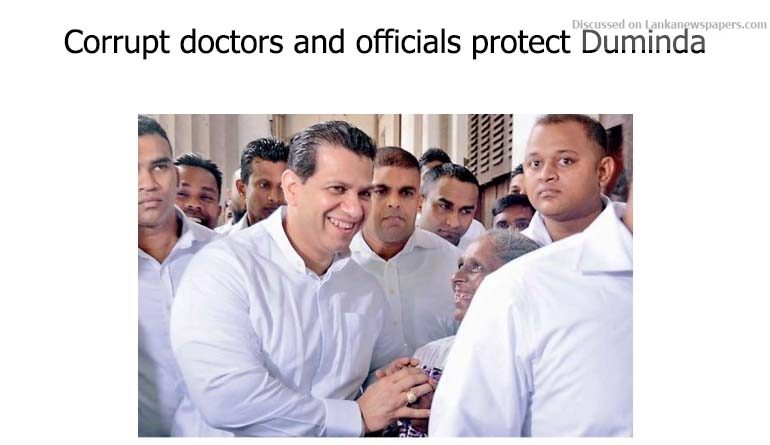 Corrupt doctors and officials at the Welikada Prison and prison hospital have allegedly received bribes to keep convicted criminal Duminda Silva at the prison hospital.

Duminda Silva is serving a death sentence for committing the murder of four people, including former Parliamentarian Bharatha Lakshman Premachandra.

Sources said that some doctors at the Welikada Prison and prison hospital officials have allegedly solicited millions of rupees to keep Duminda Silva in the prison hospital.

Sources at the Welikada Prison revealed that prison physicians and some top rank officials solicit large sums of money to keep prisoners in the prison hospital.

They reportedly prepare false documents and reports to support their claims that those prisoners and detainees should be kept in the prison hospital for indefinite durations due to their deteriorating physical and mental health condition.

Allegations over the doctors attached to the Magazine Prison (Welikada) have been reported in the recent past. The doctors were accused of transferring detainees to the prison hospital thus preventing them from serving time behind bars.

Doctors and officials have solicited millions of rupees to assist the detainees and prisoners.

Minister of Prison Reforms, Rehabilitation, Resettlement and Hindu Religious Affairs D. M. Swaminathan told The Sunday Leader that he has received information about the racket and he has instructed his officials to conduct investigations into the allegations.

He also said that he had already issued instructions to launch investigations against relevant prison officials.

Minister Swaminathan, however, stated that his ministry cannot take direct action against the doctors as they come under the Ministry of Health.

He said that the Ministry of Health must take appropriate action and look into the allegations. The Minister said that he has raised the issue with the Health Ministry.

According to data at the prison hospital, among those admitted to the prison hospital most recently are those convicted for drug smuggling, theft, traffic accidents, misappropriation of funds, fraud, murder, possession of illegal alcohol, unpaid compensation, and robberies.

They were admitted to the hospital for heart ailments, diabetes, paralyze and kidney disease.

Admitting prisoners in the prison hospital based on the illnesses is not illegal.

But what prison officials and doctors do this to assist prisoners and detainees for a bribe is something else altogether.

Sixty-two prisoners have been receiving treatment for over a month at the prison hospital, according to statistics of the prisoners recorded up to January this year.

Ward No. 1 of the hospital had 15 detainees and prisoners with hypertension, myositis, carcinoma of vocal cords, colostomy, diabetic mayopathy, diabetes, fistula and retroviral infection.

According to the hospital and prison records, Duminda Silva was admitted to Ward No. 3 on September 9, 2017 and had been there for three months.

However, in reality he has been in the prison hospital since he was sentenced in October, 2016.

Meanwhile the appeal against the death sentence issued on Duminda Silva is to be heard this week.