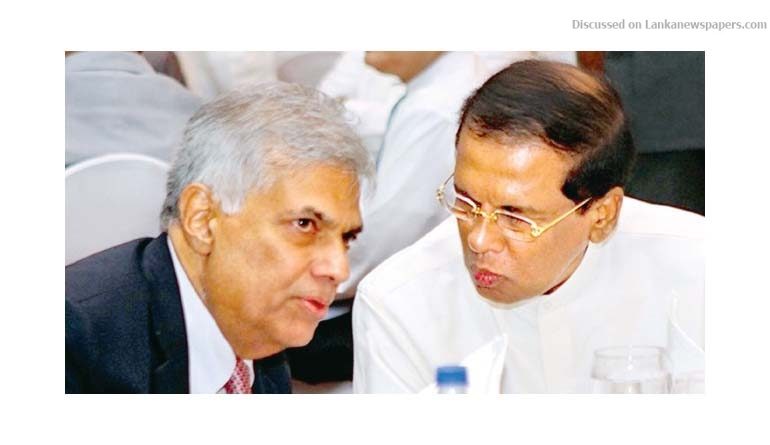 The Cabinet of Ministers last week approved the Cabinet Paper on the abolition of the Cabinet Committee on Economic Management (CCEM) under Prime Minister (PM) Ranil Wickremesinghe, a high profile Cabinet official told Ceylon FT.
“The paper was presented to the cabinet by President Maithripala Sirisena, for the second time at Tuesday’s(20) Cabinet meeting and it was approved, the official said. On the earlier occasion, the PM had requested more time for him to study the Cabinet paper.
“Therefore, there will be no weekly CCEM meetings anymore,” he said.
The President set up an alternative high-powered National Economic Council (NEC) late last year, as the apex body of Sri Lanka’s economic management and consultation, replacing CCEM.
Speaking to the Ceylon FT, NEC’s Secretary General and Chief Economist Prof. Lalith  Samarakoon also confirmed the decision and said the President had intended for all the economic policy decisions to be taken though the NEC, of which the PM is also a part.
“We will announce our new economic policy plan this week, to address the country’s key economic issues and also the plans to inform our operational process to the all relevant Government line ministries and Government authorities,” Samarakoon remarked.
According to him, the NEC is now fully equipped with all relevant intellectual and other resources to command and guide the Sri Lankan economy through an efficient and transparent economic management process.
“Through the NEC, we are planning to scientifically review all economy-related Cabinet Papers with expert assistance and it will streamline the Cabinet’s approval process, while giving more credibility to Cabinet decisions,” he said.
The CCEM has been the country’s key economic decision-making body since its establishment, but only has UNP Ministers and pro-UNP advisors, like R. Paskaralingam and Charitha Ratwatte.
According to the President’s office, severe irregularities and transparency issues were observed within the existing CCEM mechanism, posing a severe threat to society.
“It has been likened to a parallel Cabinet. There was a lack of coordination among line ministries when considering the existing CCEM-led, economy-related Cabinet Paper presentation process,” a Government minister said.
Therefore, the Government plans to standardize the existing economy-related Cabinet Paper approval process through the newly-created NEC.
However, addressing last week’s Cabinet briefing, Co-Cabinet Spokesperson
Dr. Rajitha Senaratne informed the media that the future of the CCEM, led by Prime Minister Ranil Wickremesinghe, is to be decided following discussions with President Maithripala Sirisena.