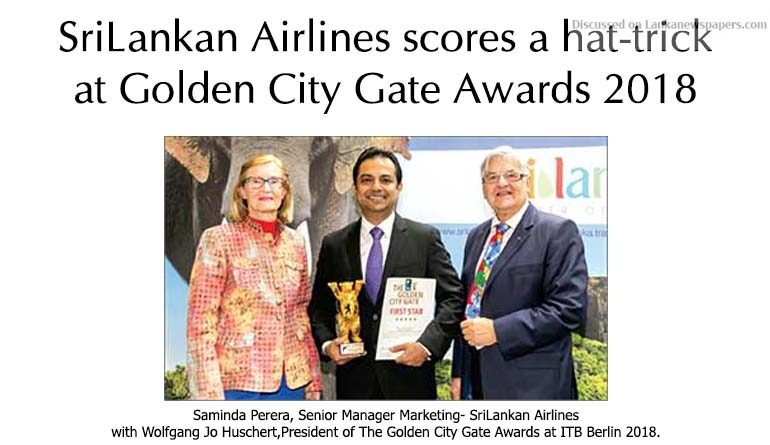 SriLankan Airlines, the National Carrier of Sri Lanka and a member of the oneworld alliance, reaffirming the global appeal and innovativeness of its marketing communication endeavors yet again, won three awards at Golden City Gate Awards 2018 at ITB Berlin, the world’s largest tourism trade fair. The 18th edition of the awards saw a jury 40 members judging 157 submissions sent by over 30 countries.

SriLankan Airlines was awarded the ‘first star’ in the campaign category for its Melbourne launch campaign “Two Cities, One Spirit.” It also bagged the ‘second star’ in the same category for its brand campaign in China themed “The Spirit of China, the Story of Sri Lanka.” The third, another ‘second star’, was bestowed upon SriLankan for its video “The Largest Carrier to India” in the TV Cinema Spot category.

This is the second consecutive time the Airline was commended at the Golden City Gate podium, having been the recipient of the ‘first star’ for its destination video “Epic Journey of Sri Lanka on SriLankan Airlines” in the in the MICE Promotions category, last year.

SriLankan Airlines Chairman Ajith Dias said, “We, at SriLankan Airlines, are truly delighted to receive three prestigious awards at this year’s Golden City Gate Awards. This proves that our marketing communications endeavors have been universally accepted.”

SriLankan Airlines, Chief Commercial Officer, Siva Ramachandran said, “We are truly honored to have our efforts recognized at the Golden City Gate Awards yet again. This award will be an inspiration for us explore new avenues in creative conceptualization and creation of unique content to take Sri Lanka to the world.”

The ‘First Star’ winning submission, the campaign conducted for the launch of new destination- Melbourne, “Two cities. One spirit” stems from a place of honoring and celebrating the kinship between Melbourne and Sri Lanka. This was aimed to appeal to the Sri Lankan Diaspora in Melbourne and the Australians who are attracted to adventure on the island. The creative executions were inspired by idiosyncrasies that exist in both Sri Lankan and Australian cultures, expressed through visuals that celebrate the similar vivacity and passion deeply rooted in food, art, cricket, surfing and the iconic wildlife that are inherent to both destinations.

The use of location pin as a stylistic element widely recognized by the contemporary traveller was aimed to emphasize on the non-stop connectivity (the point-to-point quality) and that the connections can be extended to an onward destination across the Airline’s network.

The Airline’s direct daily services between Colombo and Melbourne was well received by passengers, and has been a commercial success. The Airline envisages that this momentous entry to Australia will pave the way for further expansion in the region.

The ‘second star’ winning entry “The Spirit of China, the Story of Sri Lanka” is an attempt to reach out to the Chinese travellers through a medium which is familiar to them. The visuals that depict the Chinese traditional painting styles portraying prominent icons of Sri Lanka, was a pictorial translation of a destination through a visual dialect which is close to their hearts. This campaign was a brand building initiative in itself and an effective way to direct travellers and potential travellers to the language specific content created on Sri Lanka for their perusal.

Chinese art focuses on capturing the spirit of the object rather than recreating its physical form. In Sri Lanka, where what’s considered ‘ideal’ is very real – with breathtaking landscapes, vibrant history and culture – this ode to Chinese way of appreciating was amalgamated with the familiar outlines of prominent Sri Lankan locations. The range of visuals depicts the two countries’ shared love of aesthetic beauty that’s expressed in the spirit of serenity, adventure and new beginnings.

SriLankan Airlines’ presence in China accounts for 20 flights a week to four destinations (Shanghai, Beijing, Guangzhou and Hong Kong) from Colombo. Given that Sri Lanka has been progressively witnessing an increase in tourist arrivals from China, as the National Carrier of Sri Lanka, SriLankan will continue to explore potential expansion opportunities such as frequency enhancements and induction of new cities.

The third award was given away to its video titled ‘The Largest Carrier to India’ which captures the vibrancy, the liveliness and the diversity of India through attractive visuals and a captivating soundtrack. It portrays everything that embodies India as an extraordinary destination worth exploring.

Currently, SriLankan Airlines is the largest international carrier connecting India with the world with 135 flights a week from 14 prominent cities of India. This visual depiction, whilst touching upon the inherent features of India, highlights the Airline’s extensive connectivity.SriLankan Airlines has been aptly supported by its creative agency, J Walter Thompson Sri Lanka in all these creative endeavors. The latter’s creative expertise and the understanding to align with the global trends have made its association with an international airline truly remarkable and award-winning.

Every year the Golden City Gate Awards recognizes and rewards the creative efforts of the global tourism industry, expressed through various mediums. The artworks are judged by an international jury based on a point system and each submission is evaluated for its creativity, innovativeness, design, structure, authenticity and whether it encourages the audience to visit the destination.