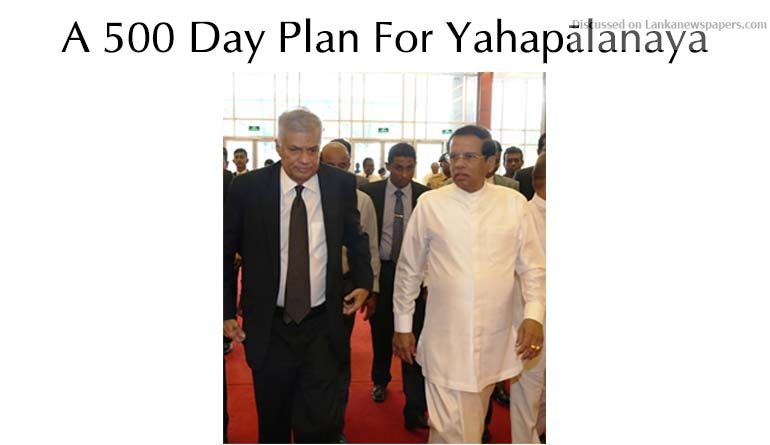 Corruption. Cost-of-Living. Competence. Communication. Performance on these four Cs will determine Sri Lanka’s future in 2020. The government has about 500 days to act.

Here’s what needs to be done.

The government’s anti-corruption credibility is dented. Regaining trust requires prosecuting one’s own. Prosecuting a couple of government MPs – one UNP and one SLFP may be enough – will go far to restore the government’s credibility. It will also then open the road for the unimpeachably legitimate conviction of the Rajapaksas and their cronies.

The process needs to be sped up. Cases need to be heard by trials-at-bar sitting every single day – if necessary including weekends. If there aren’t enough judges, introduce overtime so that judges work more. As for prosecuting resources, the AGs department needs to expand. But that’ll take too long. The fastest way of improving the state’s prosecuting capacity is hiring private lawyers to assist in cases and shifting SOE legal work to the private bar.

Emblematic cases are well and good. But no ordinary citizen paid a bribe to the Rajapaksas personally. Their experience of corruption is paying cops and principals. Extrapolating from Transparency’s Global Corruption Barometer, every year nearly a million Sri Lankans pay bribes the police and 740,000 pay bribes for schooling. For the effects of anti-corruption to be felt by the public, the government needs to go after the minnows too.

Since the police and schooling are by far the most significant areas of retail corruption, they are where the government should start. Georgia, which had one of the most corrupt police forces in the world, has some good ideas. Their progressive government cleaned up the problem in months. One strategy outlined in their PM’s book, Practical Economics, was to set up a special unit to police the policemen. This unit, outside the standard police structure, hired young and highly motivated plain-clothes constables to offer bribes to policemen. The officers had cameras in their cars to ensure that the evidence was irrefutable. Police accepting bribes were caught on video. The courts would then swiftly jail them and remove them from service. Officers who did not take a bribe were offered rewards, and even promotions. A flying-squad of 50 officers – armed with the latest technology e.g. bodycams –could transform the police force in a matter of months. Similar methods could be used by the Bribery Commission to prosecute errant policemen and principals. Once the police and schools are cleaned up, then other consumer-facing government institutions like kachcheris, CEB, water-board and courts can follow.

Instead of deflation – a reduction in the cost of living – the government should ideally help the public understand that rising incomes is more important. But that can’t be done in two years. So prices need to go down. The fastest way to reduce prices is to reduce taxes. But the government needs taxes, especially thanks to the Rajapaksas corruption and white-elephant debt.

Therefore, the fastest way of reducing taxes is selling assets. And the quickest way to sell assets is via the stock-exchange. Start by selling the remainder of SLT and Hotel Developers (Hilton). Then sell small stakes, say 10 percent, of Bank of Ceylon and People’s Bank. That may be enough to eliminate NBT and the other irregular taxes in the short-run till tax reforms kick-in.

The second way of reducing taxes is accelerating tariff reduction and introducing tax simplification. As tariffs reduce, goods automatically become cheaper. The fall in government revenue is often compensated by higher volumes of consumption. With sufficient asset sales, the government may be able to tide over this transition period. In the medium to long term, improvements in tax collection and reduction in SOE losses should kick-in to place government finances on a sustainable level.

A reduction in the price level will also enable the Central Bank to either cut interest rates, or at least hold them steady. This will ensure that investment continues and the demand side of the economy holds up.

Cutting corruption and the cost-of-living won’t be enough. The government needs to govern. People need to have confidence that the government is building a better future. And nothing smells of the future like high-modernism. A few quick wins are enough. Pick five priority projects and get them done or at least ensure they are visibly under construction. The Colombo East Terminal, Colombo Inland Waterway, Central Expressway and Malabe Light Rail are good candidates.

Sri Lankan Airlines rightly takes a great deal of press bandwidth. Take on Sri Lankan’s liabilities and sell it. If that’s not possible, close it and auction the landing slots to Sri Lankan flagged carriers on a medium-term lease to ensure competition on routes. Its painful, but better than the pain of a weekly headline. Tourism is one of two major drivers of growth at the moment. Introducing competition into catering, terminal management and bunkering at Katunayake and Ratmalana will help reduce Sri Lanka’s expensive lift-costs. This will keep the labor-intensive tourism boom booming.

None of these projects affect the median Sri Lankan voter. That was the genius of Mahinda’s cross-country road, electrification and water projects. Now that the low hanging fruit is by and large complete, the next step is soft-infrastructure. Every parent wants their child to be a doctor or an engineer. But only 869 of Sri Lanka’s 2803 schools that offer A Levels offer the science stream for A Levels. But that’s not so bad. In 2014, over half the students who sat for O Levels failed English and 43 percent failed maths. The diagnosis is clear: increase the quality of maths education. Raise maths and English teacher salaries to get capable people into the system, train existing teachers so that they teach better and harness technology. This can’t all be done in two years. But people will notice if serious steps are taken in the right direction.

Communication is less about strategy and more about implementation. So here are some concrete steps. Weekly cabinet briefings and occasional presidential tweets about ‘taking stern action’ won’t control the newscycle. Nor will the complete absence of clarity in the government’s messaging.

There should be a press conference every day of the week. Monday can be on corruption, Tuesday on the cost of living, Thursday for demonstrating broader competence. These press conferences need not be led by ministers every week. They are often too busy. A civil service spokesperson could be sufficient.  All they have to do is update the public on action the government is taking in each of these domains, the progress made that week and answer questions raised by the press.

Cabinet briefings contain a great deal of very useful things the government is doing, but the documents provided at the briefing and the briefing itself are not very informative. It does not explain how many people, for example, a water supply project will benefit and how it will transform their lives.

The Roman saying teneo auribus lupum refers to a situation where, “I’ve got a wolf by the ears; for I neither know how to get rid of her, nor yet how to tame her”. That is where the Yahapalanaya government stands today. As a result it has legislated rather than governed.  But ultimately that will not be the electoral test. The question will be, have you delivered?

Reform may be deadly, but the price of failing to reform may be even more fatal. But by focusing on these 4Cs over the next 500 days the government may just be able to ride the wolf and tame it too.