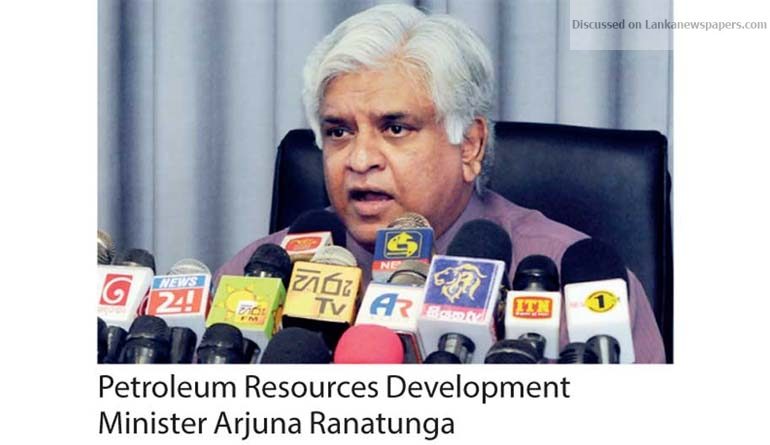 Despite the Government being committed under the structural benchmarks of the International Monetary Fund (IMF) to introduce a pricing formula for fuel by the end of this month, Petroleum Resources Development Minister Arjuna Ranatunga confirmed that no steps had been taken in this regard.

“It has to come from the Finance Ministry. If the President and the Prime Minister tell us to do a formula, we might have to do it, but I was not given a deadline,” he told journalists in Colombo yesterday.

While admitting that there were many rounds of discussions with the Finance Ministry and Lanka IOC on increasing fuel prices, Ranatunga insisted that it was a decision the Government must make.

“This is a decision that the Government must make. They have to decide if they want to serve fuel at a subsidised price and serve a social obligation at a loss or increase the prices, putting a burden on the general public. It is not something I decide,” he stressed.

He said no initial steps had been taken to introduce a price formula to date.

“The Government will arrive at a decision at the right time,” Ranatunga stated.

The Minister also noted that the intention of the Finance Ministry in introducing the price formula was to minimise the losses incurred by the Ceylon Petroleum Corporation (CPC) and to ensure that the prices were on par with the international market.

However, Ranatunga said that he was personally not in favour of the idea of introducing a pricing formula for fuel.

He argued that the subsidised price benefit went directly to the general public.

“The subsidised price benefit largely affects the livelihoods of the many people who are living below the poverty line. This is one of the reasons why we wanted to stop the corrupt and fraudulent businesses that were mixing and using kerosene oil for heavy vehicles and buses.”

Asked if the Government would decide to introduce the pricing formula before the end of this month, he said the Petroleum Resources Development Ministry would have to develop and implement it, while insisting that the Finance Ministry would provide advice on the methodology.

The implementation of a pricing formula for fuel or electricity has always been a challenge for successive governments given the political risks associated with such a move. The present Coalition Government is already facing several challenges in the aftermath of its loss at the Local Government Election in February, while the Joint Opposition on Wednesday also handed over a no-confidence motion against Prime Minister Ranil Wickremesinghe which will be taken up in Parliament on 4 April.

Industry experts point out that with elections coming up, politicians are getting ready to issue their usual giveaways to expand their voter base, ignoring the important reforms that are needed for the economy’s benefit.

A pricing formula will make it possible to price products and services in a cost-reflective manner and keep political interference at bay. However, successive governments have used electricity tariffs and fuel prices to sway voters in the lead-up to elections.