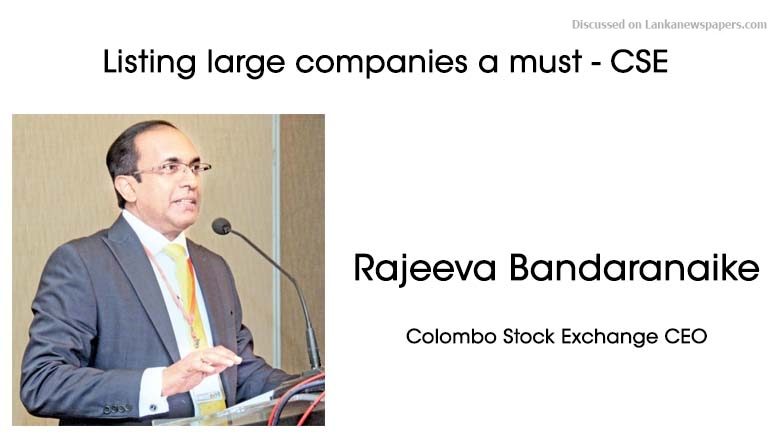 Financial freedom must be given to State owned large enterprises to reach out to capital markets for their funding requirements, said Colombo Stock Exchange CEO Rajeeva Bandaranaike.

He said this should be done while conducting awareness campaigns among decision makers, trade unions and the general public on the benefits of listing public enterprises and the myths and misconceptions in connection with going public.

Bandaranaike was speaking at the Capital Markets Conference 2018, held in Colombo on Wednesday. “There seems to be a common belief that politically, listing of state owned enterprises amounts to privatization. So, it is essential to conduct awareness campaigns among decision makers, trade unions and the general public on the benefits of listing public enterprises.”

Bandaranaike emphasised that large state owned banks, insurance companies, which are not listed on CSE, will have to go to capital markets for their funding requirements because the government can’t afford to keep funding these institutions any longer.

The market lacks depth and breadth. Depth is terms of size and liquidity and breadth in term of the range of products. First is liquidity. The most commonly used yardstick is what we know as turnover velocity which is at 7% is a cause for concern, Bandaranaike noted.

Furthermore, the proposed new Securities and Exchange Commission (SEC) Act will strengthen the hands of SEC in terms of regulations including the ability to impose not only criminal but also introduce civil sanctions. This will include market offences, the ability to license investment advisors individually, giving greater oversight into the conduct of individuals giving investment advice and similarly for agents and the authority to fine market intermediaries for rule violations.

The new Act will also facilitate several market development initiatives. It will enable new products to be launched, such as real estate investment trust, exchange traded funds, stock borrowing and lending. The new Act will also facilitate the licensing of a clearing house which will act as the central counterparty for equity and will be a precursor for financial derivatives. In addition, CSE will be continuing its efforts targeting frontier market funds in key destinations like Singapore and London.

CSE is also expanding the spectrum of listing offerings through the introduction special Boards for SME companies and a Multi Currency Board.

On the SME Board, CSE is looking to offer an alternative channels for SME other than bank funding and private equity funding for both debt and equity capital.

On the proposed multi currency board, CSE is looking to service both local and foreign companies wishing to raise equities and debt capital in foreign currency.