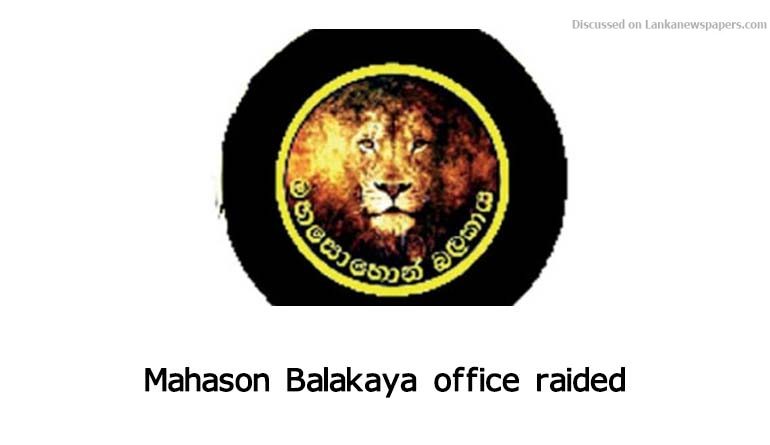 The Terrorist Investigation Division (TID) had recovered several office equipments and propaganda materials, which were used in propagating hate speech, from a office at Naththaranpotha in Kundasale last morning following the information received during the interrogation of the head of ‘Mahason Balakaya’

Addressing a news briefing, Police Spokesman SP Ruwan Gunasekara said, based on a statement made by the prime suspect Widanapathiranage Amith Jeewan Weerasinghe (26) a resident in Kengalla, Digana, investigation officers had also recovered seven bottles which had been allegedly kept to make petrol bombs.

During the briefing, SP Gunasekara exposed to media a microphone with a tag ‘Mahason Balakaya’ and was used by the group to hold press conferences.

Meanwhile, a special investigation had been launched with the support of experts to trace the incoming and outgoing calls details of the mobile phones of the suspects.

A total of 445 complaints had been received island-wide relating to incidents of damaging houses and shops from March 4 until March 12.

Among them, 423 were incident in Kandy Police Divisions and the rest (22) in other districts.

According to reports, a total of 24 religious places were damaged island-wide and among them, 19 were from Kandy.

He said in Kandy 60 incidents of vehicle damages were reported while another five reported in other areas.

A total of 28 people including 22 individuals from Kandy and another six from other areas had sustained injuries in violent incidents.

“ We arrested 178 individuals from Kandy of which a majority of 119 were arrested under the State of Emergency. From the arrested, 50 were released on bail while 128 further remanded. A total of 102 individuals from other areas had been arrested. Forty-five of them are on bail while 57 have been further remanded. Therefore, a total of 280 suspects have been arrested,’ he said.