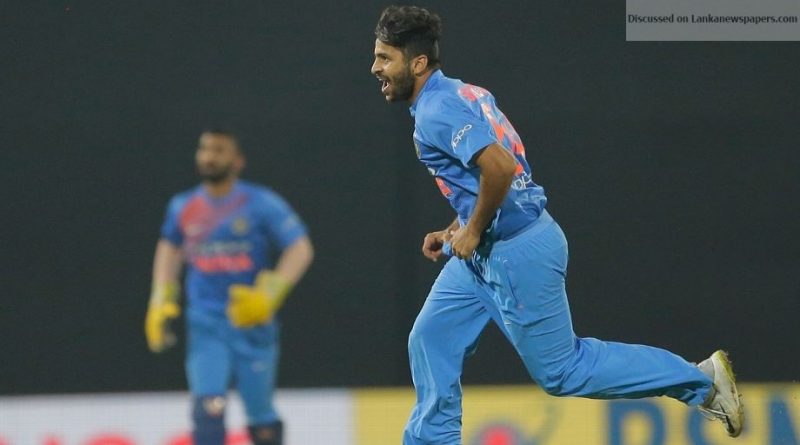 Manish Pandey and Dinesh Karthik calmly negotiated a tricky middle period to get India their second win in a truncated 19-overs a side Nidahas Trophy fixture in Colombo. They beat Sri Lanka by six wickets, with 10 balls to spare, and go atop of the points table with one game to play.

The win was earlier fashioned by Washington Sundar and Shardul Thakur, who bowled tight spells on the face of a proper Sri Lanka counter-attack that could’ve so easily left India chasing close to 200. Sundar bowled four tight overs with his offspin and gave away just 21 runs, while Thakur finished with career-best T20I figures: 4 for 27 off four overs, during the course of which he showed tremendous variations, particularly the knuckleball.

When the winning runs were hit, Pandey was unbeaten on 42 off 31 balls with three fours and a six with Karthik supporting him to make a sparkling 25-ball 39 not out. The pair added 68 runs for the unbroken fifth wicket, after India had slipped to 85 for four in the 10th over to help complete a challenging chase into a cruise.

Suresh Raina injected momentum into India’s innings with two fierce sixes in his 15-ball 27 after Shikhar Dhawan and Rohit Sharma fell early. KL Rahul, playing his first game of the tournament, was then out hit wicket to leave India reeling. The pressure was on, but Pandey batted with a sense of nonchalance that rubbed off on Karthik.

With the ball too, India fought back from a difficult position. They took three Sri Lanka wickets in the space of 13 balls after they had reached 113 for 3. The mini-collapse also coincided with a boundary draught that was broken after 30 deliveries when Dasun Shanaka edged Thakur to third-man for four. Shanaka struck the only six in the slog overs, before he, Akila Dananjaya and Suranga Lakmal fell in the last seven balls.

Sri Lanka lost Danushka Gunathilaka to a fine catch by Suresh Raina at midwicket and Kusal Perera, undone by Sundar in the fourth over. The rampant Mendis then added 62 runs for the third wicket with a scratchy-looking Upul Tharanga. The pair ensured Sri Lanka finished the Powerplay overs.

Mendis, who was audacious in his footwork and shot selection, often walking across to pull and whip, hit three fours in his 38-ball 55. Briefly, Perera and Shanaka threatened to take the game away from India, but were out looking to hit out. This stalled Sri Lanka’s momentum, thereby leaving them a good 20-25 runs short.