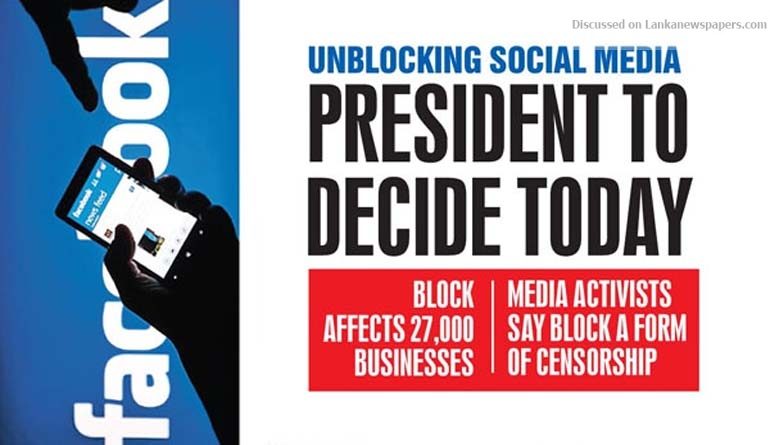 The President is on an official visit to Japan and is expected to communicate his decision to the Chairman of the Telecommunications Regulatory Commission of Sri Lanka (TRCSL) today.

The ban was imposed after Police found that extremist groups were spreading hate against minority communities on their facebook pages and other social media sites. They also found that information for mobs to gather to stage attacks in the Kandy District was publicized on these sites.

State Minister of National Policies and Economic Affairs Dr. Harsha de Silva had raised concerns about the adverse impact on many local businesses owing to the ongoing restrictions imposed on social media. “It is certainly having an impact on many enterprises, both large and small. We understand this matter. I have personally spoken to the Chairman of the Telecommunications Regulatory Commission of Sri Lanka (TRCSL) and I am aware that he is communicating, regarding this matter, with the President, who is currently overseas and I am hopeful that the block will be removed as soon as possible,” he added.

The TRCSL yesterday (12) said that they have received many complaints from businesses on the adverse impact of the restrictions presently imposed on social media.

According to the media office of the TRCSL, almost 27,000 online businesses have been affected by the restriction. It was said that these complaints have been forwarded to the relevant authorities.

Meanwhile, speaking with Ceylon Today, the Executive Director of Sri Lanka Association of Software and Service Companies (SLASSCOM), Chrishan de Mel said that the social media ban has created a negative perspective about Sri Lanka internationally, especially when Sri Lanka was on the verge of creating a brand for its Information Technology and Business Process Management industries. He added that these measures have directly affected many companies that rely on internet based marketing as well.

Media activists have also objected to the continuing block saying it was a form of Censorship. New Media expert Nalaka Gunawardene said that the extremist groups are using proxy servers and were carrying on using their facebook pages.

“This is an ill-advised move and it is the ordinary user who is affected,” he told CeylonToday. “There is no justification for the continuation of the block,” he added.