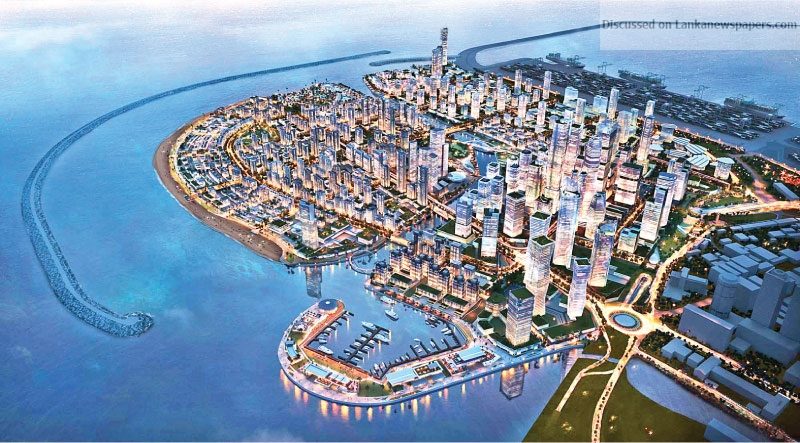 Marine biologist Carmel Corea begins her argument against the Port City by quoting Arahat Mahinda who is believed to have told King Devanampiyatissa “the birds and beasts have an equal right to move about in any part of the island as thou and that the island belongs to the people and that thou are only a guardian”. At the media briefing.

Hands up, I admit that I didn’t delve into the Mahavamsa to confirm the words passed between the bearer of Buddhism to ancient Lanka and the great King at their first meeting simply because it rings of the truth – this Island belongs to all of us.

Starting on this premise, it is hard to find fault with Carmel’s address to a seminar in Colombo last week where speakers lined up to take a swing at the government and its pet project the Colombo Port City. The seminar was headlined as ‘The Hidden Truth’ behind the project.

The truth as Carmel and company believes will bring major repercussions with the completion of the Port City built on 269 hectares of reclaimed land. Among the consequences future generations will face are: The threat of buildings in Colombo City sinking with main roads cracking; Central hills forest cover being erased leading to reduced water supply and drought resulting in food shortage; sea erosion and coral reefs being destroyed affecting marine life including fish supplies being badly hit; raw sewage and solid waste disposal into the sea; and the tourism industry affected.

Before taking Carmel’s argument step-by-step, let’s look at the solution she has given, an alternate plan instead of the Port City – turn the isle of Mannar into an offshore banking hub.

“If you need an offshore island to create an international finance city then it can be built on the island of Mannar which has an area of 50 square miles. The distance from Colombo is 142 miles and you can connect it with a high-speed rail network. The flying time in only 15 minutes. So instead of going through such a devastating development we can use the isle of Mannar which is already there and you can do this without destroying our people,” Carmel counters.

But as it is, the Port City which is taking shape under the aegis of the China Harbour Engineering Company (CHEC) is a sore eye to everyone at the seminar held at the Methodist College auditorium including the People’s Movement Against the Port City (PMAPC), Dr, Ranil Senanayake, a systems ecologist, Bishop Asiri Perera, the head of the Methodist Church, representatives of the fishing community, and Carmel herself.

According to the Bishop, the Port City was “not in line with the teachings of the Holy Scripture” as man was interfering with nature. Bishop Perera said: “We (the Methodist Church) are not against development but we stand for the rights of every human being. Nature, and a conducive environment is for all of us but we now hear of the detrimental effects (of building this Port City).

“I’m very, very sad it has become a political issue and that we are looking at the project from a monetary basis. The government has not considered the ill-effects on nature and I call on the government to listen to voice of the people,” the Bishop voiced.

One strident voice is Carmel who has come armed with a long list of environmental issues that have cropped up due to the Port City and the ill-effects that will crop up as a result.

This apparently could lead to the capital city sinking. Already many old buildings in the Fort area have faced flooding issues. The developers of Cinnamon Life had their schedule put back by almost a year due to the water from the Beira affecting the foundation works, it was noted.

Carmel continues. On sand dredging, coastal erosion and coral destruction: “Dredging has resulted in sand particles smothering the reef which is the spawning and breeding ground for fish. It also protects the coast from erosion. Waters have become turbid due to dredging and this prevents sunlight from reaching the corals.”

“Reefs provide nature with a natural filter system for clear waters. It also controls the amount of carbon dioxide in the water by extracting the acidity and this has an effect on climate change. The tsunami was directly linked to the destruction of reefs. In areas where the reef had been destroyed, the tsunami waves were 30-feet high and surged inland for about a mile, while in areas where the reef was intact the wave was about nine feet and barely grazed the beach. Coral reefs buffer our island but the sand dredging is destroying it as well as increase coastal erosion along the West coast.”

Quarrying for millions of cubic-metres of granite also exacerbates drought conditions by destabilising the environment in water catchment areas in the Central Hills, Carmel pointed out. It will also destabilise the geology of the country leading to increased risks of landslides and other natural disasters. Her zealous presentation also touched on the disposal of raw sewage into the waters off Modera–kilometre-long pipes taking the waste from Colombo and its suburbs, including the National Hospital, and pumping it into the sea.

“It is up to us to stand up and do our duty to the nation. This is our country and we have to fight for this. We are all guardians,” she concluded. Just like Arahat Mahinda reminded the King.

Is it then too late to stop the project? Not so according to Carmel who proposes the reclaimed land can be turned into a salubrious park making it a vital green lung for Colombo. As for the International Financial City, well Mannar is always available, although the island’s donkey population might be disgruntled. Perhaps they can come to some sort of an amicable settlement with our two-legged variety – those who make these decisions.