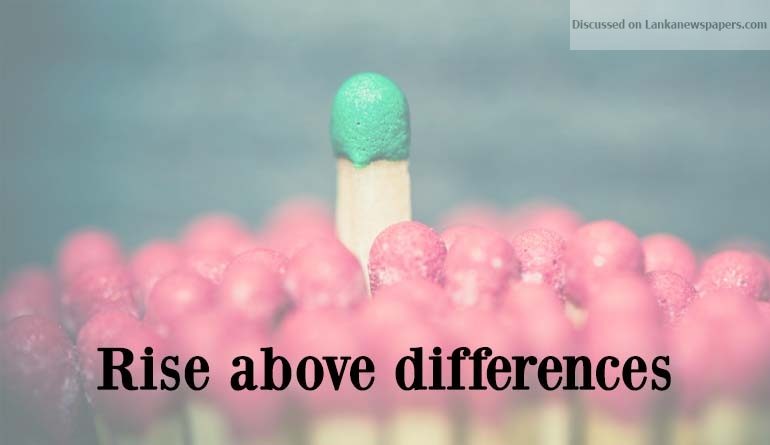 My dear Sri Lankan,
It is with a sense of sadness that I am writing to you this week following the events in Kandy that has cost two lives already. While I hope that no more lives are lost, I am frustrated and disappointed even more about how the events are being handled, both by those in power and those in the opposition. Less than nine years ago, we ended a war that raged for almost thirty years. It was a war that cost over a hundred thousand lives. Several generations in this country knew nothing but war. They didn’t know whether they would return in the evening to their families after leaving home in the morning.

One would have thought that we learnt something from that experience. We ought to have learnt that spreading hatred among communities brought about destruction and death. We should have realised that one race is not superior to another and that there aren’t two countries in this single nation.

What the events of last week – and indeed the last few years – tell us is that we have not learnt anything from those thirty years of war. It tells us that at least some of us still believe that they should think and act along communal lines and that they should try and belittle and humiliate other communities.

What happened last week and over the last few years also proved beyond doubt – if any proof was ever necessary – that our politicians think only about themselves, their survival and their prospects of re-election and that they would gladly sacrifice the future of the country, if it gave them an advantage.

I heard that, after seeing what happened last week, three great cricketers – Sana, Mahela and Kumar – had appealed for calm and urged their countrymen to live in peace and harmony instead of killing each other and destroying property. Ah, if only our politicians had a fraction of their wisdom!

Consider what Maithri has done, for instance. For several weeks, he had been dragging his feet about appointing a proper Minister of Law and order, to deal with corrupt politicians. The obvious choice was the Field Marshall because he has a track record of finishing whatever job that is given to him.

The Greens nominated the Field Marshal for the job. Maithri didn’t give it to him. That was because Maithri was afraid he would clean the stables, and that would mean that most of the ‘pohottuwa’ boys and girls would be behind bars and he wouldn’t be able to do a deal with them for the next election.

This is the same Maithri who, just before the last election went campaigning around the country saying that he had a sword which he would swing to end corruption. Now, he seems to have lost that sword and is desperately telephoning Basil malli to work out a compromise to unite the Blues.

Even while Kandy burned, Maithri was fiddling with the Law and Order Ministry which had been assigned ‘temporarily’ to the Green Man. Then he suddenly appoints that Ranjit chap for the job. Apparently even Ranjit didn’t know he was getting the job until the last minute. So, this is ‘yahapaalanaya’!

The Green Man is no better. He wants keep his job while every Wije, Wasantha and Palitha tries to move a vote of no-confidence against him. I hope he is not seen dancing to the ‘baila’ at the Mustangs at the Royal-Thomian today, after being there on Friday – but not yet having the time to visit Kandy.

Then, remember how grateful we were to Mahinda maama for ending the war? After the war, he had a golden opportunity to unite the country and give every community their due place. Instead, he chose to play to the gallery and appease one community, just so he could win the next election.

Last week we heard Mahinda maama claim that there were no communal clashes during his time and what clashes there were, were the work of those in government now. I am not sure whether his memory is fading, but I wonder who turned a blind eye when the Bodu Bala Sena was running riot?

Now everyone is trying to blame everyone else. The Greens say the clashes were the work of the ‘pohottuwa’ chaps who say it is because the Greens are inefficient. Wimal sahodaraya says this is all a conspiracy hatched by the Greens to get keep the premiership. Meanwhile, Kandy continues to burn.

Dear Sri Lankan, I hope you will have the wisdom to see what is happening, realise its senselessness and have the courage to rise above communal differences. Most of all, I hope you will be able to see through the lies that are uttered by our politicians of all hues. Or else, we as a nation are doomed!

Yours truly,
Punchi Putha
PS: With all due respect to that Ranjit chap and to Murali, appointing Ranjit as Minister of Law and Order instead of the Field Marshall is like sending Murali out to bat with a hundred runs needed for victory, while Sangakkara is awaiting his turn at the crease. And, we all know what happens when the captain is engaged in match-fixing!