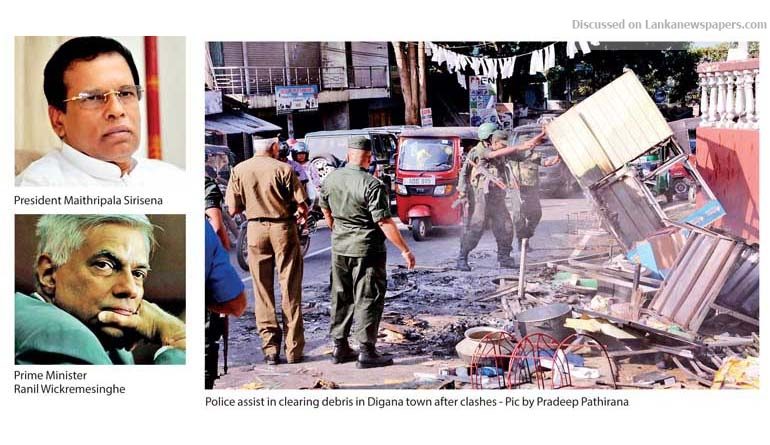 President Maithripala Sirisena declared a state of emergency yesterday for the first time since 2011 as the Government struggled to rein in violence in the Kandy District, after one person was killed when violent mobs attacked homes, businesses and places of religious worship in the Muslim majority town of Digana.

The remains of Abdul Baslith, a 24-year-old resident of Digana town, were found in a burnt house last morning, the first recorded loss of life from Monday’s violence. Following a Cabinet meeting on Tuesday morning a decision was made to impose a state of emergency, which was later implemented by President Maithripala Sirisena.  The state of emergency will be in effect for one week, the President’s Media Division said in a statement. Schools will also remain closed for a second day as curfew was extended till Wednesday morning.

The state of emergency lapses within 14 days if it is not approved by Parliament by then, legal experts said.

The state of emergency would allow the Government to impose either a district-wide or islandwide curfew and make essential service orders, lawyers said.

“Regulations enacted by the promulgation of the state of emergency provide the Police and Tri-Forces with powers to bring the prevailing situation under control. The President has instructed the Police to impartially, comprehensively and promptly deal with those engaged in criminal activities and those causing or attempting to cause ethnic and religious tensions, irrespective of their ethnic or religious identities and political affiliations,” the statement said.

Local politicians in the Kandy District reported new incidents of violence in Aluthwatte in Digana, in spite of an ongoing police curfew in the Teldeniya and Pallakelle areas. Reports of hundreds of villagers taking to the streets and forming mobs, disregarding the state of emergency, were trickling in late into the night. Police confirmed about 400 people had gathered in the Thennekumbura and Menikhinna areas in the outskirts of Digana with police struggling to quell flare-ups in different parts of the region. The situation had remained serious throughout Tuesday to the extent that police were unable to survey the degree of damage to property since violence began over the weekend.

Muslims around the country were also demanding government action with a hartal held in Kalmunai where protestors attacked a police jeep. Protests were also held outside Khettarama Stadium in Colombo where the Nidahas Trophy kicked off its inaugural match, but the protestors had dispersed peacefully.

Parliament set aside business slated for yesterday in order to debate the unrest in Kandy. While the debate was in progress, a group of ministers and Muslim MPs left Parliament for Kandy and surrounding areas to witness the situation first-hand.

A helicopter belonging to the Air Force landed in the Parliament premises to transport the ministers and MPs. Ministers Lakshman Kiriella, Faiszer Musthapha, Rauff Hakim and S.B. Dissanayake along with a group of Muslim MPs comprised the team which left at around 4.30 p.m. from the parliament grounds.  According to Parliament sources they were to attend a special meeting of the Kandy District Development Committee and engage in a visit to the Kandy and Pallekele areas.

In concurrence with the Government’s stand, Prime Minister Ranil Wickremesinghe, speaking in Parliament about the violence, said a CID team had been dispatched to investigate the death. He also recapped the start of the violence and announced the Government would pay compensation to all those affected by the violence.

“Some who hunger for political power are trying to make use of incidents of this nature and it could be seen that they are planning the disruption of normalcy and instigating communal violence. The only tool they have is instigating racial violence and racism all over the country to make use of a crisis to win power. It could be seen that organised efforts are being made to spread racism and communal disharmony through social media. One such group had been campaigning on social media during the past nine months claiming that Muslims are threatening Sinhala supremacy in the land. They have produced false statistics,” Wickremesinghe told Parliament.

He said the Government categorically condemned these atrocious acts and any form of racial disharmony.

“We as a government condemn these violent activities. We, as a responsible government, in no way approve these illegal and violent acts. We all have the experience of a 30-year-long war and are aware of the value of peace and harmony. We are bound to protect the heritage of Sinhala Buddhists. Sinhala Buddhist heritage or rights are not threatened by anyone. There are other communities living here as Sri Lankans. All Sri Lankans should live in harmony, enjoying equal rights. That was the vision of D.S. Senanayake. We protect that vision. Therefore, we regret the damage to Muslim places of worship. The Government will not hesitate to take legal action against those who instigated these riots.”

Addressing the House, Tamil National Alliance Jaffna District Parliamentarian M.A. Sumanthiran accused Government leaders of being “spineless” in the face of violence directed against what he called “numerically inferior communities.”

Sumanthiran thanked Chief Opposition Whip Anura Kumara Dissanayake for speaking up for the rights of those from minority communities.