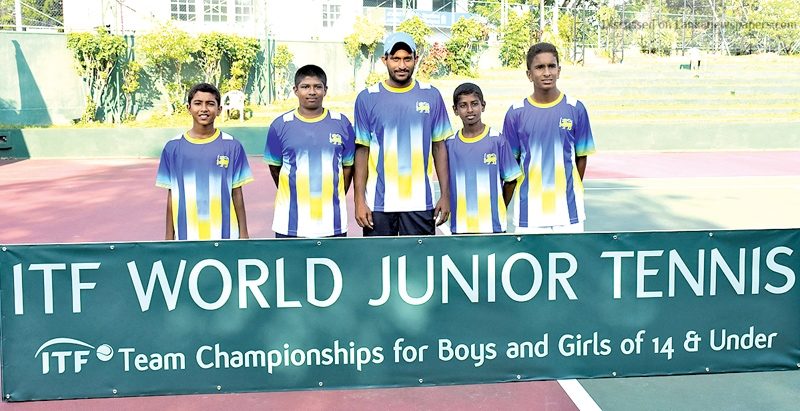 Sri Lanka junior boys’ tennis team went got off to a flying start recording a 3-0 win over Singapore in their opening tie of the ITF World Junior (14 & under) boys’ Tennis Team Championship Asia/Oceania Group ‘C’ Pre-qualifiers that commenced at the Sri Lanka Tennis Association courts yesterday.

The Lankan boys will battle with Laos today in their second tie of the tournament, commencing at 8.30 am.

The 14 & Under Junior Girls’ Team Championship Asia/Oceania Pre-qualify openers saw Lebanon and Kyrgyzstan making a clean sweep of their matches (3-0) over Malaysia and Mongolia respectively while Iran beat Singapore (2-1).

Sri Lanka is hosting back to back three ITF junior tennis events where 46 teams from 21 countries are taking part in four events until March 18 at SLTA courts.

Two teams each from the World Junior Tennis boys’ and girls’ competitions as well as the Junior Davis Cup event and three teams from the Junior Fed Cup tournament will be selected to take part in the final qualifying round.

The Referee for the event, Tony Glentworth of New Zealand is the referee for all four events with Sri Lankan Dharaka Ellawala as the Assistant Referee. The other officials include Sri Lankan white badge officials Dinusha Wijesuriya, Prasad Jayalatharachchi, Anjana de Silva and Avantha Suranimala as well as a number of National umpires. Amir Borghei and Jonathan Stubbs are the ITF representatives at the events.