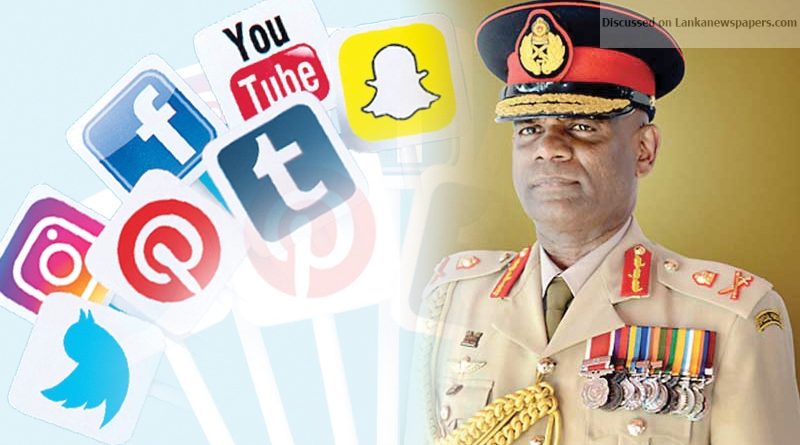 All Army personnel have been restricted from posting any content in their Social Media accounts that carries information on national security or insulting remarks on politicians or public officials.

A series of restrictions on using Social Media platforms including Facebook, Twitter and Linkedin has been issued to all Army personnel by Army Commander Lieutenant General Mahesh Senanayake.

Accordingly, all Army personnel are barred from posting, uploading, forwarding or sharing any content that relates to national security, military affairs or political affairs. They are also not allowed to post or share insulting remarks on politicians or public officials, or anything that create racial or religious disharmony. Commenting on such posts is also not allowed.

Army Spokesman Brigadier Sumith Atapatthu, confirming to the Daily News that a set of restrictions on using Social Media is in operation, said its objective is to maintain the good name and image of the Sri Lanka Army and avoid leaking of military information.

He said the restrictions were imposed about eight months ago and a reminder letter was issued last Thursday by the Army Commander asking all army personnel to strictly abide by the newly imposed regulations.

Army personnel have been asked not to reveal their military ranks or identity information in their Social Media accounts and not to post any photos in uniform. Posting photos with military armaments in the background is also not allowed.

The Army Commander in the reminder letter has emphasised that disciplinary action would be initiated against anybody who does not follow the above mentioned guidelines. The Army Spokesman said the IT division of the Army is receiving various observations on those who contravene the guidelines.

“These restrictions apply to all army personnel in general. Military officers cannot reveal anything and everything as they desire and they are expected to maintain certain standards.

“Lately, some ex-Army officers, who retired from the service a long time ago, could be seen using their pictures in uniform abundantly in the polls campaigns to market themselves. Some of the restrictions came in to being due to such misuses,” the Brigadier added.