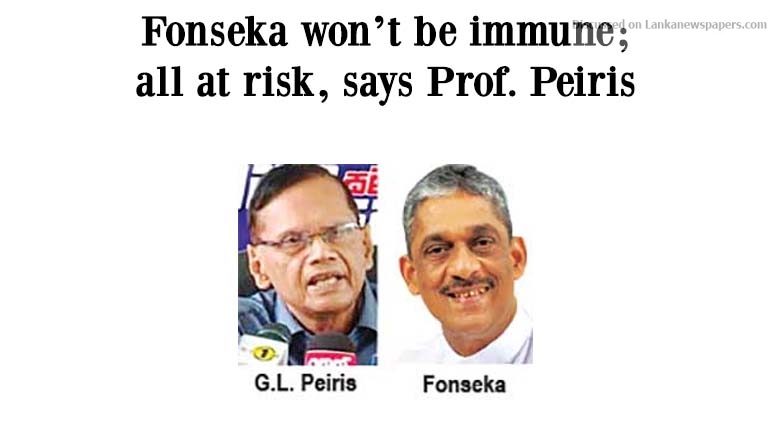 Former External Affairs Minister and top Joint Opposition spokesman Prof. G.L. Peiris yesterday said that the Sirisena-Wickremesinghe government owed the country an explanation as to why Lord Naseby’s revelations in the House of Lords hadn’t been made use of to defend Sri Lanka at the Geneva-based United Nations Human Rights Council (UNHRC).

Addressing the media at former President Mahinda Rajapaksa’s Office at Nelum Mawatha, Battaramulla, Prof. Peiris, who is also the Chairman of the Sri Lanka Podujana Peramuna (SLPP) alleged that the government had conveniently failed to challenge the Geneva Resolution 30/1 on the basis of wartime British High Commission dispatches.

Instead of seeking reappraisal of still unproven war crimes allegations, the government recently set up the Office of Missing Persons (OMP) in terms of the Geneva Resolution much to the disappointment of the armed forces now at the receiving end of a despicable project.

Prof. Peiris explained how political and military leaders and troops were likely to be hauled up before hybrid judicial mechanism as prescribed in the Geneva Resolution and subjected to other ‘insults.’

Asked by The Island whether the SLPP/JO could explain Regional Development Minister Field Marshal Sarath Fonseka’s predicament due to yahapalana government’s failure to counter war crimes allegations, Prof. Peiris said that no one, including Field Marshal Fonseka could escape Geneva operation. He asserted that the former Army Chief’s position as a member of the incumbent government would be irrelevant as far as the Geneva-led initiative was concerned.

The SLPP Chairman said so when The Island pointed out that those who had bitterly complained of the threat faced by officers and men engaged in operations against the LTTE convincingly forgot the culpability of Fonseka in case the international committee proceeded with investigations.

The armed forces brought the war to a successful conclusion in May 2009.

Fonseka is on record as having denied the alleged massacre of 40,000 civilians while distancing himself from individual acts of atrocities.

Prof. Peiris alleged that the government had betrayed the armed forces by co-sponsoring a resolution severely inimical to the Sri Lankan state.

The JO spokesman said cabinet spokesman Dr. Rajitha Senaratne’s recent declaration in response to a media query at the last post-cabinet media briefing that the government hadn’t co-sponsored Geneva Resolution 30/1 revealed their failure to come to terms with the situation.

Prof. Peiris also flayed President Sirisena for continuously trying to deceive the public by claiming that he had settled the Geneva issue through direct talks with world leaders. He insisted President Sirisena couldn’t have been unaware that the Geneva Resolution provided for hybrid judicial mechanism and his government had obtained two additional years in March 2017 to fulfil its UNHRC obligations.

Prof. Peiris pointed out that the government had been unfair by the armed forces and gone out of its way to appease Western powers and the LTTE rump.