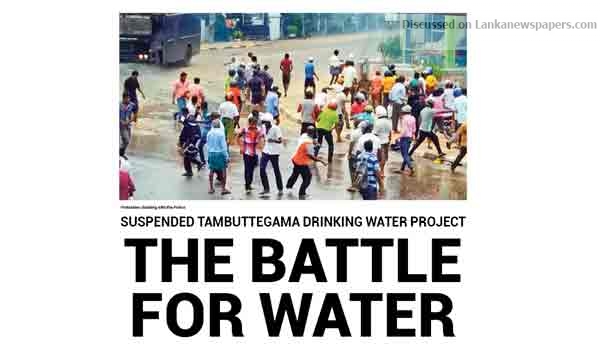 The recent protest over the Rs 18 billion Rajanganaya Tank Pipe Borne Drinking Water project to Tambuttegama in the ‘Raja Rata’ dry zone is not due to fears that water for irrigation would be affected, but is due to other reasons, National Water Supply and Drainage Board (NWSDB) Deputy General Manager (DGM) North Central Province (NCP) Vajira Wijeratne told this reporter on Friday (2 March).

The implementing agency for this water purification and supply project is the NWSDB. When this reporter asked whether this protest was political, he said that he doesn’t know. The DGM however, said that he had heard from the Anuradhapura Government Agent that the project has been suspended.

Wijeratne said that the project is Chinese funded and approved a few years ago. Nonetheless the construction works began only a month ago. Hardly one per cent of this water from this tank was to be used for purification and drinking purposes, he said.
Tambuttegama is a Chronic Kidney Disease of Unknown Origin (CKDu) affected area. The Government of Sri Lanka (GoSL) has given top priority to fight this disease believed to be caused by drinking mineral laced ground water. In contrast, Rajanganaya water, termed as surface water as opposed to ground water is not a ‘carrier’ of the CKDu
disease.

Approval for the start of this project, nevertheless now stalled, allegedly due to farmer protest, was granted by the External Resources Department (ERD), coinciding with an editorial written on this newspaper under the heading ‘ERD Law Unto Themselves’ on its issue of 4 November.

It said, “The North Central Province (NCP) is home to the largest number of patients afflicted by the CKDu”.
There is believed to be a link between water and CKDu. It’s believed that hard water, generally mineral water, extracted from underground sources, especially from areas such as the NCP, may be one of the causes of CKDu.
Others theorize that high quantities of Glyphosate in the water may be a contributory factor.
Whichever it is, getting a supply of clean drinking water to people should sure reduce the incidence of this
disease.

NWSDB Deputy General Manager, NCP, Vajira Wijeratne speaking to reporters at Anuradhapura in October last year said that there are 13,000 CKDu patients reported from the NCP, the majority of whom are from the Anuradhapura District.

Long delay
It’s in this context that an allegation made by NWSDB NCP Assistant General Manager Sudath Ratnayake has to be looked at. He claimed, that a Rs 16.3 billion (since increased to Rs 18 billion probably due to the depreciating rupee, made worse by long delays) Chinese-funded water project to provide 36,006 households in Thambuttegama in the Anuradhapura District with pipe-borne water has not begun construction because the External Resources Department (ERD) is yet to approve the loan.
He claims the tender for the project had been awarded a year ago.

This brings to question whether it’s the ‘Cabinet of Ministers’ or the ERD which has the power to approve loans? According to Ratnayake, this project was not an unsolicited proposal, but a tender which went through the normal procurement process.
If one may see a ‘hitch’, it may be due to the fact that this tender had been called for during the previous Mahinda Rajapaksa regime. So there may be politics coming into the picture. But politics shouldn’t be allowed to play with lives. Nonetheless, isn’t the ERD supposed to be an apolitical organization? Or, is the ERD a mere puppet in the hands of politicos, doing their dirty work, while the politicos hide behind it?

He said that this may be due to the fact that what the ERD thinks are the priority projects for the country.
Is it roads, or energy or water? He said as an example. If officers in the ERD feel that ‘water’ isn’t important and hence of low priority over the other projects, then ‘water’ projects get stuck at the ERD end, said Dahanayake.

The other theory put forward by him was that considering the number of Chinese ‘water’ loans in particular, the ERD may be wanting to first bunch all those projects together, in a streamlining process, before giving their approval.
For instance, as reported by this newspaper on its 1 November issue, China is to supply a $ 250 million loan for the ‘total’ coverage of the adjacent Polonnaruwa District with pipe-borne water.

Nonetheless, a third problem that may be confronting the ERD is Sri Lanka’s high debt profile, which it may not want to be further inflated by taking in more loans.

Surface water project
The Thambuttegama water project is a surface water project, not dependent on hard metal contaminated water like fluorides which is generally prevalent in ground water found in the Anuradhapura District, suspected to be the source of CKDu.
The Thambuttegama Water Project, in the NWSDB website, is listed as a ‘Foreign Funded CKD Area Water Project.’ Furthermore, when a Presidential Task Force has been appointed to combat CKD and where Cabinet approval has been granted for a project aimed at arresting this scourge, why then is the ERD pussyfooting in approving it?

According to Ratnayake, the Chinese loan for this project carries an interest rate of 1-1.5 per cent plus London Inter Bank Offered Rate (LIBOR) and is payable over 15 years. The current six months LIBOR, by which such loans are priced, is at 1.51 per cent.
It’s much cheaper than the recently issued US$ 1.5 billion (Rs 225 billion) sovereign bond carrying an interest rate of 6.25% and of a 10-year duration raised by the Government.

Or, is this delay due to the fact that the authorities feel that the fate of the voiceless poor is of no account? But when their voices are finally heard, it may be too late to undo the damage.’

But now the project has been suspended not due to the ERD, but due to GoSL succumbing to other forces.
The stage, vis-à-vis the Tambuttegama imbroglio is a battle between the protagonists not for ‘water for irrigation’, but for ‘water for politics’ versus ‘water for drinking.’ Who will win the war?

The battle is all about claims to surface water, water found naturally at ground level, such as in rivers, or water diverted to tanks for irrigation from rivers, like the water from the Mahaweli River which feeds tanks in the dry zone such as the Rajanganaya Tank, ipso facto for irrigation purposes.

However, the NCP is also an area which has the highest prevalence of CKDu which, if not controlled, results in the death of the patient.

The NWSDB is a strong protagonist for the promotion of drinking water, taking the consumers’ side whereas the Irrigation Department is pro farmer. Nevertheless, the role of the farmer and that of the water consumer in the dry zone of the country are interchangeable, given the fact that all farmers are water consumers and all water consumers may not necessarily be farmers.
CKDu is generally caused by drinking ground water which has been contaminated with toxic heavy metals such as fluoride found in the ground water in the NCP or cooking by using such water.

Tug-o’-war
Some individuals however, believe that surface water should be used for irrigation and not for drinking, with politics exploiting this tug-o’-war.

Nevertheless, certain NWSDB officials from arid Chilaw, speaking to this reporter on conditions of anonymity recently claimed that ‘water for drinking’ will win this war, though current realities at the ground level give a different picture.
A good example was the recent Asian Development Bank (ADB) funded project to divert water from the Iranamadu Tank in Mullaitivu to arid Jaffna, to provide it with drinking water, thereby freeing it from being dependent on ground water, considered to be a health hazard, because of the hardness of water in the Peninsula.

However, the project was checkmated by the Mullaitivu farmers, which resulted in the ADB going in for a desalination plant. ADB Country Director, Shri Widowati speaking to reporters in Colombo recently said that already tenders for the construction of a desalination plant worth between US$ 60-70 million for the Jaffna Peninsula is under evaluation, after which construction will be completed in two years. When on stream it will supply fresh water to part of the Jaffna Peninsula, she said.

Howbeit, NWSDB Electrical Engineer (Polonnaruwa) Sahan Tharanga Kularatne said that they utilize the reverse osmosis (RO) method to treat ground water in Kilinochchi and Jaffna, where Calcium (Ca) which can be toxic if taken in large doses, is found in high quantities.
“It’s costly, but the national policy is that such extra costs cannot be recovered from the people of Kilinochchi and Jaffna,” he said.

Kularatne, however, said that even prior to the implementation of the RO projects in the North, no cases of Ca deposits found in the kidneys of the people of Kilinochchi and Jaffna have been reported.

However, the cost of RO alone is Rs 20 a litre, equivalent to the NWSDB’s selling price of a unit (1 cubic metre) of water in Polonnaruwa, whereas the cost of production (without RO) is Rs 11 a unit. RO is not utilized when supplying treated water to the people in Polonnaruwa (by the NWSDB), because such water is Mahaweli surface water where the imbibing of such waters and connectivity with CKDu has so far not been observed.

‘Irrigation-drinking’ conflict
Meanwhile, the ongoing ‘irrigation-drinking’ conflict was brought to the fore by the NWSDB’s Mannar-Vavuniya Project Manager Velautha Udayaseelan. Speaking to reporters recently in Mannar, he said that they cannot tap the ‘Giant Tank’ in Mannar to provide pipe borne water to the people of this District because of protests by farmers, similar to that experienced in Iranamadu.
He said that farmers wanted the water for irrigation and not for drinking and their will prevailed. As a result, the Irrigation Department backed off, allowing the farmers to have their way and say.

ADB’s Dahanayake said that the battle between ‘irrigation and drinking water’ is also seen in Medirigiriya, Polonnaruwa, which has the highest number of CKDu patients in the NCP, numbering 1,400. Despite this tragedy, the adjacent Kaudulla Tank, is taboo to be tapped for drinking purposes, with precedence for that water also given for irrigation.
Nonetheless, Udayaseelan lives in hope.

He said that once the Upper Malwatu Oya Project is completed, he would be able to provide surface drinking water, bereft of heavy metals, to the people of Mannar.

“The priority of the Upper Malwatu Oya Project is drinking water first and irrigation second,” he said.
Udayaseelan’s optimism, that, finally, the NWSDB and the water consumer will prevail over the will of the Irrigation Department and the farmer, going forward, is a reflection of the confidence that the NWSDB officials in Chilaw also showed.

Meanwhile, Dahanayake, recalling a conflict between the farmer and the NWSDB/consumer vis-à-vis water, said that under the Accelerated Mahaweli Development Scheme, the Thuruwila Tank in Anuradhapura was earmarked to provide water for drinking.
“In the 1990s, the farmers went to the Supreme Court (SC) against this decision. However, the SC upheld the view that the priority for the use of the Thuruwila water is for drinking,” he said. Prior to the Accelerated Mahaweli Development Project, drinking water for Anuradhapura was supplied by the Tissa Wewa and even bathing in this historical tank was taboo.
However, with the advent of Thuruwila, times have changed, as observed by this reporter, during a media tour of the NCP, Mannar and Chilaw, organized b