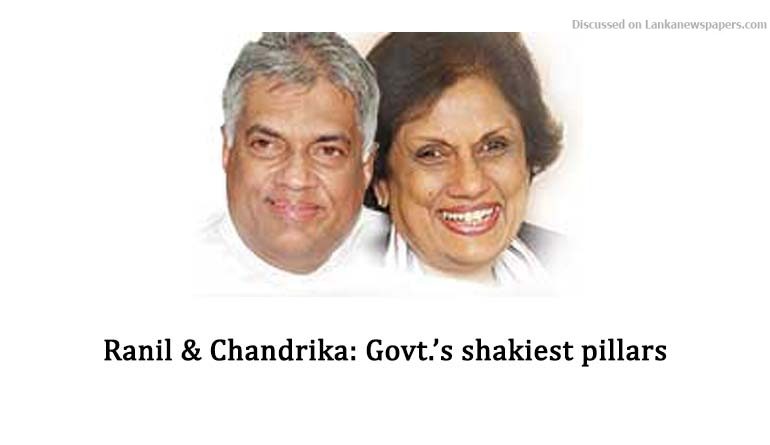 Prime Minister Ranil Wickremesinghe was addressing a serious-minded audience when he made an utterly misleading pronouncement which would instantly have been seen through by those he was addressing. A Singapore datelined story said as follows:

‘Prime Minister Ranil Wickremesinghe says that Sri Lanka’s National Unity Government has come to stay and no future administration would scrap the concept ….” Look at Germany. National Governments are shaky. But once established and taken root, it will not be scrapped, no matter who comes to power,” he said.’ (‘National Government has come to stay… no future administration will scrap it—PM’, Zacki Jabbar, Sunday Island, March 4th 2018)

In Sri Lanka even before the recent Local Government election, the major Opposition in Parliament was and remains the one led by Mahinda Rajapaksa. Even if one discounts the non-SLFP parties, it has more SLFP MPs than are seated in Government. Furthermore as the recent election proves once again, Mahinda Rajapaksa commands a larger block of votes than any single party in this country. Any National Government must by definition include him and his JO, and if it doesn’t, it cannot credibly be called a National Government. It’s because the Sri Lankan Unity government is not sufficiently broad based, and fails to include the biggest shareholder in the Opposition and indeed in the country, that this Government lacks the undergirding consensus to carry out any serious reform agenda.

So much for Mr. Wickremesinghe’s first point! The second one is also wrong. National Governments do not “take root” and remain, without “being scrapped whoever comes to power”. They are exceptional phenomena, which come into being in exceptional situations and exit the stage when that situation has been managed.

The third point is the one he didn’t make, but must have surely been on the mind of his Singaporean audience. Unlike in the National Government in Germany in Sri Lanka it is delegitimized by a Prime Minister and leader of a constituent party, who was the political patron of a guy who is wanted by the courts and is not turning up to face the music for a colossal Bond Scam while he was the head of the country’s Central Bank! That gives Sri Lanka’s an instability that no other National Government ever faced anywhere in the world.

So much then for the PM’s punditry! Right now, he, his party, his government and the country’s economy are in serious trouble. He may survive the inner-party and intra-government crisis and remain as PM and leader of his party. But his survival will be at the cost of his party and the coherence of his coalition government. Even if he survives, or rather, especially if he survives, his party and the whole country have seen and heard on television, the argument that with him at the helm the UNP can never win. Therefore, the UNP is already demoralized. It will be almost impossible to mobilize the organization and the voters at any subsequent election. That condition of creeping paralysis and despondency can be attenuated only if the UNP has a brand new leader. Who that might be I cannot say, but the basic fact is that it has to be a new leader because any new leader will have more bounce than Ranil Wickremesinghe can get.

That’s as regards Mr. Wickremesinghe’s position as UNP leader. But, what of his role as PM? If he remains, the relationship with the Sri Lanka Freedom Party will deteriorate further. The SLFP can easily project its electoral performance at the Provincial Council elections, not to mention the Presidential and Parliamentary, if it remains in a Government with Mr. Wickremesinghe as PM. It will doubtless be more cooperative if it were not seen by its voters to be working with a PM who has a devastating effect on SLFP votes and is not even popular within his own party.

What of President Sirisena? In 2015 the UNP was an asset. Today, in 2018, it is a liability, unable to retain its share of the votes and responsible for the plummeting of its partner the President’s share. The incumbent is therefore trying to square the circle by finding a UNP leader and PM he can partner with, devoid of such toxicity—and that person sure isn’t Mr. Wickremesinghe.

Mr. Wickremesinghe has thus become the weakest link in the chain of the bi-partisan Yahapalanaya coalition government. Either he goes now, or Yahapalanaya sinks under or suffocates on its own contradictions and policy incoherence.

The rearguard mounted by the Yahapalanaya ideologues and strategists is pathetically transparent:‘Ranil, Chandrika and Mangala are trusted by the minorities; the combined minorities plus the UNP base vote can see Mr. Wickremesinghe, Mangala Samaraweera or President Sirisena through, albeit narrowly’.

This scenario is laughable. Firstly, the UNP is in meltdown, as is the official SLFP, while the JO-SLPP has only a small gap to bridge, which it can do with a pan-Sinhala swing. Secondly, the situation is the exact opposite of 2015, from where this arithmetic derives. In 2015 Mahinda was defending his postwar model and lost narrowly. Yahapalana only had to capitalize on the cumulative disaffection. It was on the attack. Now Yahapalanaya is inevitably on the defensive because it is being judged on the basis of its performance as a government, and in relation to the performance of the Rajapaksa administration. In 2015 a zestful Yahapalana coalition riding on the coattails of the Arab Spring and Clintonian neoliberalism (though under an Obama administration), was attacking a somewhat exhausted postwar Mahinda Rajapaksa. Today, an energized populist camp, riding the planetary backlash against neoliberal globalism and elitist Establishments, is attacking an unpopular Yahapalana coalition. That will not be reversed by late 2019.

If President Sirisena wishes to re-contest and/or the SLFP wishes to be in the next government, it cannot be in alliance with the UNP, and certainly not with Ranil Wickremesinghe’s UNP. Even if the UNP leadership changes, it is difficult to imagine a policy pivot as dramatic as to effect a turn-around in political fortunes and enable victory. Such things did happen once before though, when Ranasinghe Premadasa was the Presidential nominee in 1988, but there is no such anti-establishment rebel in UNP or SLFP ranks. Minus Ranil Wickremesinghe, the UNP can do reasonably well and be a strong Opposition or even a coalition partner. If President Sirisena wishes to be a viable candidate for a second term, it can only be with the endorsement and support of Mahinda Rajapaksa. Mahinda holds the effective veto.

Mr. Wickremesinghe is only one of the two crumbing pillars of the Yahapalana government. The other is his co-signatory to the 1997 Liam Fox Agreement, Chandrika Bandaranaike Kumaratunga. The political liability she has become was empirically evidenced on her own home turf. Instead of staying above the fray, she insisted on being appointed the SLFP organizer for Attanagalla, her family’s pocket borough. As organizer, she is directly responsible for her party’s electoral performance in the area. She lost Attanagalla to the Rajapaksa’s new party. With a glint and a grin, Mahinda Rajapaksa permitted himself a rare on-camera gloat, saying that in the polling booth located closest to her residence, “Attanagala Kumari” (“the Princess of Attanagalla”) seemed to have secured only a few dozen votes!

But this loss of home turf was only the most obvious signal of a completely collapsed strategy. Chandrika attempted two reckless moves: firstly to plug the SLFP in with the UNP, and secondly to evict the Rajapaksas from the SLFP and take it over, reducing President Sirisena to a Manmohan Singh figure. What she actually did was to partially reverse her father’s rupture with the UNP and sabotage his project. What she has achieved is nothing short of amazing: she blocked the functioning of the two-party system which her father inaugurated two decades before India, when as late as 1977, the appearance of the Janatha Party broke the dominance of the Congress. But the two-party system has now snapped back into place with the turbo-charged emergence of a populist party filling the void left by the SLFP. That populist party is not a third party as Vijaya’s and her admirable SLMP was; not even a second force; but has beaten both the SLFP and the UNP on its first outing—something that her father SWRD Bandaranaike failed to do on his SLFP’s first outing in 1952.

Chandrika’s most resplendent failure was in seeking to evict Mahinda from the SLFP, deprive him of the post of Leader of the Opposition and gifting it to her ally Mr. Sampanthan’s TNA. By vacating her father’s party from the political space he cleared in 1951, she has managed instead to gift Mahinda a brand new party in which he is no longer constrained as he would have been as SLFP leader. Mahinda’s new party either owes little to the Bandaranaike heritage, or it is proof that the Bandaranaike political legacy has accrued to the Rajapaksas without and against the surviving Bandaranaike offspring. The Pohottuwa can trace its lineage back to DA and DM Rajapaksa, and the greatest figure in its narrative will always be the war-winning president, Mahinda. So, Mahinda now has his own, powerful, superbly performing political formation, which doubtless will be inherited by his brothers and sons. If the SLFP survives, it’ll have to be in the same relationship to the JO-SLPP that the Communist Party had to the LSSP after the mid-1960s—that of permanent junior partner. Having ineptly handed over her political patrimony to the Rajapaksas, all that’s left is for Chandrika to do is convert the SLFP headquarters (as well) into a boutique hotel.

If the SLFP has the slightest chance of revival it will be only if it can collaborate with UNP dissenters in promptly throwing out Ranil Wickremesinghe as UNP leader and PM and uniting with a more populist-oriented UNP in a new centrist bloc. But here too, it is Chandrika who is blocking that urgent rectification and compensatory outcome, by supporting Wickremesinghe’s continuation as UNP leader and PM, through her ‘Seven Dwarfs’ faction of SLFP parliamentarians.

The country cannot go forward with a government that is going around and around, chasing its own tail. The UNP is now at a crossroads. It can choose either the road that once led it out of a worse crisis—that of a policy pivot under a new, populist leader, as in late 1988, or take a harder line as in 1953 (Sir John Kotelawela) and was on the verge of doing in the late 1960s. In both of the latter cases, the present PM’s father was a key influencer. In the UNP administration of 1965-1970, besieged by Sinhala Buddhist nationalist agitation (January 8th 1966), university student unrest and strikes by labor unions, the UNP cleaved into two factions. Prime Minister Dudley Senanayake and development wizard Dr. Gamani Corea headed the liberal-welfarist wing, while JR Jayewardene and Esmond Wickremesinghe argued for a tougher, more authoritarian line and a less welfarist, free market economic policy.

The Opposition press was filled with apprehension of a rightwing power grab from within, strategized by Esmond Wickremesinghe, against the liberal-welfarist Prime Minister. Young Rohana Wijeweera urged his fledgling party to collect weapons, on the grounds that the Hard Right of the UNP would not permit the holding of General Elections. He proved to be wrong, but it was close. Were it not for Prime Minister Senanayake’s resistance, Sri Lanka may have become a second South Vietnam. Today, with the move to induct Field Marshal Fonseka as the Minister of Law and Order, in charge of the 40,000 strong para-military STF—a step that Prime Minister Wickremesinghe had canvassed in five letters to President Sirisena– it looks like the PM is back to his father’s proposed pivot to the authoritarian Right in the late 1960s, while President Sirisena plays the liberal-welfarist role of Prime Minister Senanayake. If things continue as they are, Sri Lanka will go off the rails before it is brought back onto them late next year.