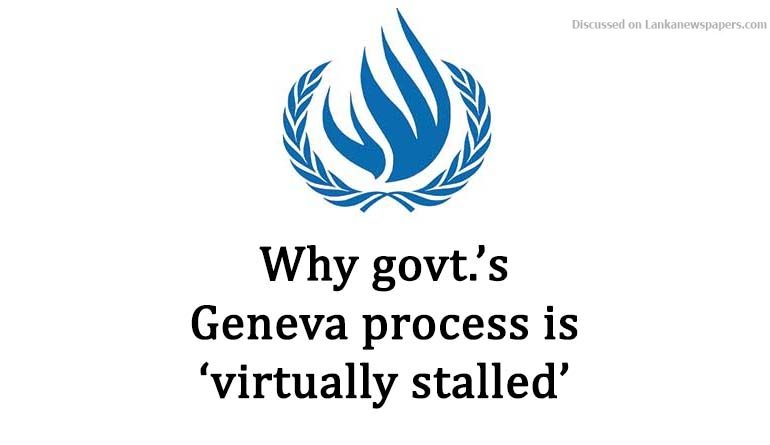 Far from being able to handle itself in a responsible manner to represent Sri Lanka at the UN and engage robustly with the international community when Sri Lanka is under severe scrutiny, this ‘Unity’ government failed to send a delegate (usually at Head of State or Ministerial Level) to participate at the High Level Segment of the ongoing session of the UN Human Rights Council. It is clear that the Unity government is in serious crisis.

Ministers of the UNP were huddled in numerous corners in efforts to save their Prime Minister from being replaced in an inner-party rebellion and the party itself from being thrown out of the ‘unity’ arrangement by their junior partner, the SLFP. Despite a temporary respite with the party succeeding in avoiding both fates, the crisis continues, with daily public demonstrations suppressed with water cannon and tear gas, fast becoming the defining feature of this government which paints itself internationally as a staunch defender of human rights.

Meanwhile, the UN High Commissioner for Human Rights airs his frustration in Geneva at the lack of progress in implementing the utterly unrealistic Resolution 30/1 of 2015, initiated by the US and co-sponsored gleefully by this supine government, an act which preempted the rest of the Human Rights Council declaring their reservations about the Resolution.

Instead of talking down to Sri Lanka from a great height, the UN High Commissioner and others (States and sundry NGOs) who are planning on similar denouncements when his report is formally submitted on the 21st of this month at the Council, should ask themselves why, even under this pathetic Unity government, bending over backwards to please the international community at every available opportunity, their prescription has not been implemented.

They won’t have to look too deep to find that it is un-implementable. Whoever had this bright idea in the first place decided to use Sri Lanka as an experiment in Transitional Justice, a still-evolving concept, when there clearly wasn’t a “transition” they could impose their conceptual framework on. But they thought we were stupid enough to swallow that, and this government duly provedit was, but the people certainly weren’t and didn’t.

Sri Lanka was clearly an unusual situation. Firstly, there was a rare and decisive victory in a situation of total war over a terrorist army. Secondly, it was unique in that terrorism had thus for been carried out by individuals, small groups employing guerilla tactics, or large militias, but not a parallel‘regular’ army deploying large formations, artilleryunits, with a navy and air force to boot. This unusual combination of facts, further complicated by an ethnic aspect to the conflict, needed a well-thought out post-war programme, not the one the West hurriedly imposed on us, supported by desk-bound UN bureaucrats who didn’t have sufficient knowledge or experienceto design one for such complex circumstances, including in the case of the infamous Darusman panel, which neither exercised sufficient academic rigournor maintained acceptable evidentiary standards in compiling their report.

Going by the report ofthe UN Special Rapporteur on Terrorism presented at the Council, they haven’t even got themselves a suitable definition of “Terrorism” yet, in order to agree on how its evil manifestations should be dealt with and the circumstances in which such evil has to be combatted. While the safety of civilians is always a matter of priority, it is no easy task, and without a comprehensive understanding of this phenomenon and its damaging and lasting effects on the civilian populations and their governments which have been terrorizedand held hostage for years, any solution could only be tentative, not a Biblical pronouncement.

Most UN interventions in post-conflict areas have been in places where peace was “negotiated” with or without UN mediation, and therefore theconduct of the UN, its officials and its agencies, was based on the relevant “peace-agreement”. UN intervention also helped in countries where societies were in “transition” from military or military backed one–party dictatorships to civilian democratic governments.

Sri Lanka was in none of these categories. The peace-building playbook didn’t have a ready-made solution, so one was hastily put together without adequate thought and sought to be implemented in the similar manner to what they had experienced before.

Andrew Gilmour, UN Assistant Secretary-General for Human Rights proved this when he declared in November 2017 in New York, that “Transitional justice is an essential element of the UN system’s work in peace building and sustaining peace in Sri Lanka … As we all know, the conflict in Sri Lanka ended without a peace agreement. In the absence of such a document that would guide the Government and Sri Lankan society in working towards a sustainable peace, Human Rights Council resolution 30/1 established the framework by which the Government of Sri Lanka, victims and civil society can address the root causes of the past conflict and put in place the foundation for a peaceful, sustainable future that protects human rights.”

Seriously? Surely, it has to be understood that a ‘a peace agreement’ as a framework isnot the same as a hostile UN resolution in a very different context, deeply unpopular in the country, signed by politicians who are seen as poodles of the West and who were opposed to the war against terrorism and separatism in the first place.

What are the UN High Commissioner’s beefs about non-implementation in his latest report? Here are a few:

comprehensive Transitional Justice agenda that would include the establishment of an accountability mechanism, truth-seeking, reparation programmes and institutional reforms as promised, and is”yet to be made publicly available and consulted.”

The Consultation Task Force on Reconciliation Mechanisms has not yet been endorsed or officially reviewed by the Government or the Parliament.

Very little preparatory work for the judicial mechanism, such as Special Courts.

Crimes under International Law have not been incorporated into domestic law.

Are these likely to be implemented, when the country knows that these inadequately considered prescriptions have been agreed to by a Government which, 3 years into their 5 year term, is rapidly crumbling from the inside while losing ground outside?

The High Commissioner should reflect on why, as he says in his report, these commitments have “been virtually stalled for more than a year” and “did not receive sufficient political support to move things forward”. He has his answer right there. His reluctance to re-examine the faulty prescriptions only adopted at the Human Rights Council due to thisGovernment’s co-sponsorship, doesn’t speak much for the OHCHR, which takes the easy route of recommending the drastic measure of Universal Jurisdiction instead.

And as if that were not enough to discredit the UN High Commissioner for Human Rights in the eyes of the Sri Lankan public, he cites the case of Lalith Weeratunga being given bail in a corruption case, to highlight contradictions in the criminal justice system, while acknowledging that this case itself has nothing to do with human rights! This reference and example comes while the whole country is angered at the non-arrest of the well-known perpetrators of the Bond Scam which did far more harm to the economy as a whole, and soon, to the people individually when they’ll have to pay for its cost!

The people of Sri Lanka and most politicians who represent them know a dud when they see one, and are not going to give “political support” for the implementation of Resolution 30/1, as it stands. At the very least, it needs to be revised and rectified.

However, both people and politicians have ensured that the country remains stable and at peace and will not to return to violence, by doing what they have to do, with or without outside involvement. They have been doing it for the 9 years following the war, with the previous government throwing in massive post-war development into the mix which saw people’s lives and livelihood improve in leaps and bounds. The best the international community can do is to study our experience closely and incorporate its lessons into their own theoretical framework. Obviously there are still issues that need to be addressed with understanding and sensitivity, especially those situations of ethnic or ethno-religious tensions that need to be addressed urgently.

As Foreign Minister Sergey Lavrov of Russia cautioned while addressing the High Level Segment of the on-going sessions: “There are continuedefforts by some to adjust human rights to their opportunistic interest”.Sri Lanka has to ensure that it doesn’t become a pawn in the hands of such players and take responsibility to protect itself from such efforts, while doing its best to uphold the universal human rights standards it has subscribed to.

As for Resolution 30/1, the only way to realistically address the stalemate is to revisit and re-negotiate it to reflect the reality of what was a long and searing experience of a citizenry and a State, which was also rare and quite specific. In the re-negotiation, the necessary improvements to human rights this country obviously needs, moving forward, can be included, containing the full complement of human rights which the UN declared are indivisible: civil, political, economic, social and cultural rights.