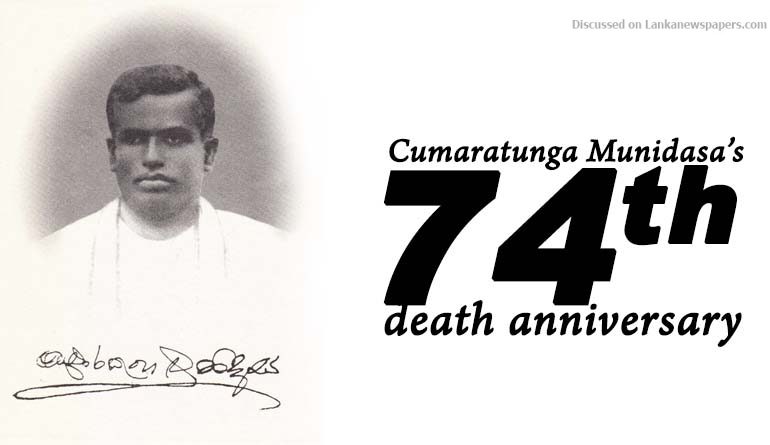 The origin of the Lak Mini Pahana, the premier Sinhala newspaper goes back to 156 years, and to be exact, its first appearance was on September 11, 1862. Its editor was pundit Koggala Dharmathike. During the next 42 years, its editorship changed from hand to hand including pundit M. Dharmaratne, during whose stewardship it was developed into a more advanced newspaper.

After a lapse of a few years, it was Cumaratunga Munidasa who revived the defunct Lak Mini Pahana in 1934 (June 20, 1934), and brought it into a recognizable newspaper with added features to attract a larger readership and enhance its circulation. However, the first act of Cumaratunga since he took over its editorship was to correct its title by changing it from Lak Mini Pahana to Lak Mini Pahana.

Pahana is ‘stone’ or ‘rock’, while pahana is ‘lamp’, that eliminates darkness and brings light. A collection of editorials written by Cumaratunga Munidasa since he became the editor of Lak Mini Pahana was published by the Subanda Havula in 1984, under the title Pahan Katu Veki on the eve of the completion of 50 years of Cumaratunga’s editorship of the paper. This publication was edited by Professor Bandusena Gunasekara. The most recent collection of the Lak Mini Pahana Editorials was published by the Cumaratunga Munidasa Trust in 2006.

Unless the context demands descriptive writing Cumaratunga style of writing is often lucid and precise. Therefore, in his own inimitable style, Cumaratunga spells out in the anniversary issue of the Lak Mini Pahana, the objectives for which the paper stands.

For the advancement of the nation, the language and the religion, the national dignity, thoughts and ideas and also, for the eradication of falsehood, hypocrisy, pusillanimity, thralldom and ineptitude.

However, the main purpose of penning this short essay is not to talk about the unique contribution he made to Sinhala journalism, as journalism is commonly described as a form of glorified commercialism. A close analysis of the editorials carried in the Lak Mini Pahana during the editorship of Cumaratunga Munidasa would reveal that he exalted the editorial writing to greater heights, the features of which could only be paralleled to a handful of newspapers that still safeguard and maintain the virtues expected of a true editorial.

Virtues of a true newspaper editorial

Adopting different writing techniques and styles that the readership could emulate

Arguing why it is an issue – Impact on Society

highlighting some good points – showing the writer is rational and considerate

Strengthening the editor’s point of view

Concluding/ending with a powerful punch

on the Birth of Jesus Christ

All the above virtues are to be seen in the editorial published in the Lak Mini Pahana on December 18, 1934. The introductory paragraph highlights the relevance and importance of celebrating the birth anniversary or the birth of Jesus Christ.

The editor says that although he doesn’t belong to the same faith we are bonded to celebrate this all-important day as all of us are human beings. He also says that Jesus Christ is the Prince of Peace everyone has a right to join in celebrating his birthday. Christ devoted his entire life to the service of mankind and, endeavoured to drive home the fact that people are equal. Cumaratunga says that Christ’s very mission of spreading the message of equality and brotherhood are reasons for everyone to rejoice.

He took the side of the oppressed against their oppressors, that of the “dim multitude,” not that of the privileged few. As a clever artist the editor of Lak Mini Pahana narrates how Jesus Christ appearing amidst a gathering whose intention was to stone the woman who was alleged to have committed adultery; one of the most dramatic and beautiful stories in which Jesus says “All right, but let the one who has never sinned throw the first stone!” The editor asks “how many such delightful stories should we bring about to praise you?” This is how “Cumaratunga pictures the incident:

(The woman caught for committing an offence not becoming of womanhood, was seen shivering and lying on the floor frightened of being killed. Villains saying ‘This woman who has committed such a debased act should be stone and killed’, were also seen frowning and growling, with heavy stones in their hands. Having heard of this commotion you were also seen walking calmly and serenely to the scene. The silver tinkling sounds that came out of your youth to inquire into the incident were pleasing to the ears. It was not that the unpleasant utterings of the villains who accused the hapless woman were not heard. What did you say? “Let anyone who has not committed a single wrongdoing pelt the first stone at her!” Lord Jesus, what a miracle? There isn’t a single hand raised. There isn’t a single stone getting released from the hands. How did you become aware of the true nature of mankind?)

This very composition is seen as similar to the imagery created by Vidyachakravarthi, the author of the Buthsarana, when he composed the piece of lively writing on the ferociousness of the elephant. It is the figurative language of the highest order, depicting the demeanours of the two contrasting characters, and to be more specific, describing the serenity of the Buddha pitted against the ferociousness of the elephant.

Cumaratunga being thoroughly familiar and conversant with the literary marvels of the yesteryear brought forth the literary styles in contexts where the current idiom was not seen as adequately expressive. Cumaratunga thus while creating the desired mental picture, taught the readership the descriptive efficacy of the Sinhala language. He was primarily a linguist. It’s no wonder, therefore, that he wrote his editorials in the highest possible idiom.

Conclusion with a powerful punch

The unusual length of the particular editorial amply shows how much the editor was interested in the topic. In the concluding paragraphs he stresses the following two important facts:

Jesus Christ was an easterner and is eastern doctrine was instrumental in creating a disciplined and civilized society in the west. But how ungrateful are those westerners who demean/degrade the easterners?

The editor is much concerned with the unity that needs to be established between Buddhist and Christian communities in the country. He says that the common factor that could bring about this much-desired unity is the language. He, therefore, proposes that all should contribute to preserve, enrich and develop our language which provides the common link.

The editorial of the Lak Mini Pahana is sufficient proof that Cumaratunga’s sole intention was to enrich the society from all fronts. This noble cause he followed assiduously as he believed that a newspaper editorial influences public opinion, and has a significant impact on the society. The issues he deliberated in his editorials were, therefore, carefully selected, and as he never followed a path of hypocrisy his writings were truthful, bold, upright and straightforward. The way he endeavoured to uplift the society by being selective in the topics he chose for his writings was based on the dictum that newspaper editorials should function ‘as the schoolmasters of the common man’.

Some of the editorials Cumaratunga chose for the Lak Mini Pahana were: The discipline of our children; Our Language; Our Servitude; Sinhala Schools; Our Independence; Spoken Sinhala; The respect of teachers; The future of the House of Representatives; Improper conduct of teachers; Publication of books; Regional administration; Selection of school text books; Fear of diseases; The country’s crimes; Education of Ceylon; The budget of the coming year; Cabinet of ministers; The teaching profession; Elections; Temperance movement’ Corruption of the Buddhist Order; Fear of ignorance; and Mutual co-operation. These reflected some of the more important issues the then society considered as having an impact on the society.

Argumentative writing – a hallmark of Cumaratunga-writing

Argumentative writing is writing that presents the writer’s claim on an issue. In such instances, the editor assumes the role similar to that of a lawyer. Such an essay is treated as a genre of writing that requires the student to investigate a topic; collect, generate, and evaluate evidence; and establish a position on the topic in a concise manner. The objective of argumentative writings is to drive home the fact that one should accept as truth only after he is convinced that sufficient evidence is available to establish a claim. While Cumaratunga used irrefutable evidence based on reliable sources, his editorials influenced public opinion, promote critical thinking and sometimes caused people to take action on an issue.

To quote Professor Bandusena Gunasekera “Cumaratunga achieved his aim through the Lak Mini Pahana. It stood in the forefront of Sinhala journalism. It showed the progressive way to journalism and provided a model for contemporary and succeeding newspapers. The specific quality of the Lak Mini Pahana editorials was the strict observance of the Sinhala idiom and the correct usage, the technique of verbal coherence, an emphasis of thought and impression and penetration. The topics were nationally significant and important. They were fearlessly critical, fair and unique in style.”