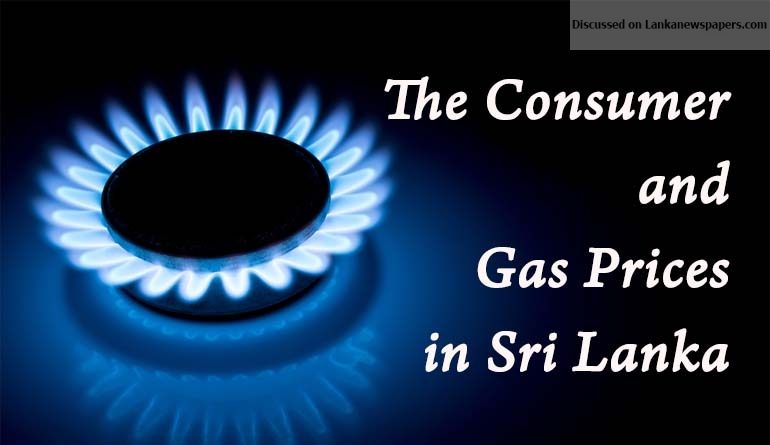 The consumer in Sri Lanka is not organized as in other parts of the world in protecting and enhancing their due rights under the legal system. They accept whatever is given by the trader, manufacture, industrialist, and the State regulator – that is the Consumer Affairs Authority – in the absence of a vigilant and a powerful consumer movement.

In the United Kingdom the consumer movement and media (with the magazine ‘WHICH’, the powerful consumer magazine) are in the forefront working together, assisted by DTI (Department of Trade and Industry), the main regulator in UK on consumerism. Gas is a clean and cheap form of energy utilized in the households now spread in the villages, as a necessity for the industry, especially the food industry on large scales.
This has a direct impact on the cost of living with price hikes in gas on increase. Traditional methods of generating energy have been replaced by the gas industry, monopolized by two leading giants ‘Laugf’ and ‘Litro’ (previously Shell) all over the country and this has a direct impact on the cost of living. They have the countrywide network of distribution of a necessary consumer item, which has a direct political and economic impact on the citizen and the State.
Why only Gas as a source of Energy
Every drop of gas, which is a by-product of the oil industry and is also found freely (such as in Israel) is imported, stored in terminals, in liquid form and distributed by the network of the two companies, now demanding price increases via the regulator, the Consumer Affairs Authority, which has the authority, under Section 18 of the CAA, act to permit companies to increase prices on an application made, after due consideration by the regulator on the justification of the request, having considered all aspects of the demand for the increase. Gas is a protected item under the CAA, with few other items declared by a Gazette Notification, to control the maximum price in order to ease the burden on the consumer at the receiving end while protecting the trader, who is expected to be fair and reasonable.
voice of the citizen
Gas has become so important to the consumer and industrialist that it needs the powerful voice of the citizen to maintain the price level in order to combat the fast increasing cost of living due to other factors such as the price increase in food and consumer items.
Traditionally, wood has been the main source of energy but it has an impact on the environment and leads to deforestation and environmental issues. Many other innovative methods of cheap, clean and environmental friendly methods were introduced but were not property marketed by the State institutions Coconut/Paddy husk, Bio Gas, solar Energy, Energy Saving methods, and many types of alternate energy were used with no success and popular appeal.

Gas prices and the cost of living

Gas prices have a direct effect and impact of the cost of living as it increases the cost of the household and the other bakery, consumer, industrial products and many food/ consumer and manufactured items, as it is the a main source of energy next to electricity, which is expensive. Unfortunately with the increase in gas prices, the trend is disproportion price increases of all consumer items, which the CAA has no control over.

CAA is expected to make a decision considering all circumstance heavily contested by the powerful companies with their legal teams in higher Courts, which often give them redress. High pressure, legal and political, is exerted on the inquiring officers at the CAA (generally politically appointed members of the board) by the minister in charge, who always takes political decisions through the politically appointed Chairman, who is often not competent to handle a situation.

impact on the country

We take this opportunity to demand the State to make arrangements to appoint the CAA Chairman through the Constitutional Council in order for the appointee to be independent and competent.

Here are a series of decided cases in the legal domain on this contentious issue, which has a direct political and economic impact on the country, as a whole, for which careful consideration is necessary as a matter of compromise/importance.

It is inevitable that the companies will take to litigation if they are not satisfied with the new price formula. Arriving at a compromise solution may not be easy, especially with an incompetent and inefficient CAA head and some members who appear not to be delivering the goods despite millions spent out of tax payers’ money for the maintance of this defunct and ineffective institution which has enormous powers to act for the public benefit.

It is learnt that the President is contemplating to meet the CAA in order to find out their views on combating the rising cost of living through the recently formed Apex body on handling economy! CAA is the best available main regulator responsible to the public in combating the cost of living by establishing consumer organizations and activities in educating the consumer, industrialist and trader on a proper consumer regime. How many such organizations are formed and to what extent has the CAA taken a leading role, is a matter the consumer/citizen will be in a position to judge.

Gas is commonly used by the citizen, manufacturer and industrialist in day-to-day life and industry, which is a sensitive topic having a direct impact on the citizen.

This has to be carefully handled with a short and long term solutions. Control of price increases are to be handled carefully and long and short term changes in the CAA is a necessity.

A competent head should be selected by the Constitutional Council and not on political criteria. The Chairman is performs a semi-judicial functions and a person with legal background or a retired Judge is preferred. Alternate energy providers, such as solar and new innovations, should be explored especially to cater the villages.

A powerful consumer activism and formation of consumer organizations should be formed with a countrywide network. Special emphasis should be given to the Israel way of innovative methods of generating energy with the abundance of our resources, such as solar, wind, bio, waste, and introducing various forms of saving mechanisms. Let the CAA start the campaign to mobilize the citizen/organizing consumer organizations/ education programmes countrywide with the help of a legal aid unit and civil society, on 15 March 2018, the world consumer day!

(Writer who takes responsibility for the contents could be contacted on sarath7@ Hotmail.co.uk)