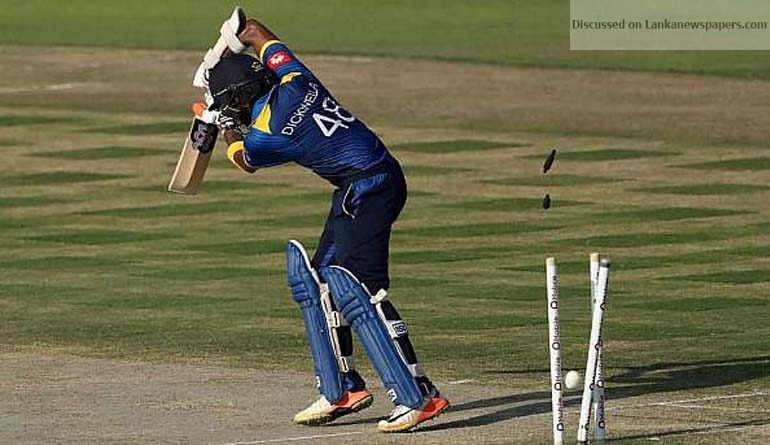 Headlines Sports
March 1, 2018 Lankanewspapers 0 Comments
The Sri Lankan selectors have dropped Niroshan Dickwella from the squad for the Nidahas Trophy. The 15-member squad that was announced on Wednesday (February 28) will be led by Dinesh Chandimal in Angelo Mathews’s absence with the returning Kusal Perera likely to take over the wicketkeeping duties from Dickwella.
Seamer Suranga Lakmal has been named as Chandimal’s deputy. Asitha Fernando, Sadeera Samarawickrama, Jeffrey Vandersay and Lahiru Kumara have also been excluded from the preliminary 20-man squad that was announced earlier.
Dickwella, who has been Sri Lanka’s first-choice wicketkeeper for a while, has been going through a lean run in limited-overs cricket. Ever since scoring back-to-back hundreds against Zimbabwe at home, the left-hander has registered only one half-century in ODI cricket in his last 17 innings. In T20Is, he scored only 39 runs in three innings in India in December last year and made 11 in the first T20I against Bangladesh recently before getting axed for the second game.
Other significant changes include the return of Nuwan Pradeep, Dushmantha Chameera to bolster the pace attack. Allrounder Dhananjaya de Silva, whose last T20I appearance came in January 2017 against South Africa, has also been included. Dickwella, Vandersay and Shehan Madushanka, who were part of the squad that sealed the T20I series 2-0 in Bangladesh, make way for the trio.
The tri-nation tournament will kickoff on March 6 with the hosts taking on India.
Squad: Dinesh Chandimal (C), Upul Tharanga, Danushka Gunathilaka, Kusal Mendis, Dasun Shanaka, Kusal Janith Perera, Thisara Perera, Jeevan Mendis, Suranga Lakmal (VC), Isuru Udana, Akila Dananjaya, Amila Aponso, Nuwan Pradeep, Dushmantha Chameera, Dhananjaya De Silva