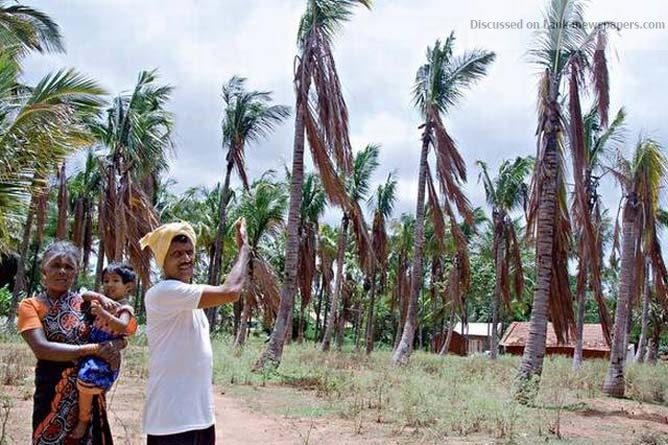 More than 280,000 people, including farmer families, who are suffering due to the drought in five districts Puttalam, Kurunegala, Mannar, Anuradhapura, and Polonnaruwa, will not be able to expect relief until at least the April inter-monsoonal rains, the weather forecasters say.

The unprecedented drought also spells danger for the coconut industry in two leading growing areas Kurunegala and Puttalam. Industry insiders had estimated at least 240 days of drought in 2016 alone. In that year, they say, Kurunegala, Puttalam and Gampaha received an aggregate total of two inches of rain. A mite infestation is making things worse.

The duty meteorologist of the Department of Meteorology, said that in the five districts that have been severely affected by drought, a small amount of rain will not be enough to help farmers. But April rains could help.

As for the prevailing heat, he said it was normal, but that low wind speeds ahead of the inter-monsoon rains, is also a factor.

Deputy director and media spokesman of the Disaster Management Centre, Pradeep Kodippili, told the Sunday Times that the five districts are facing dry conditions and not drought.

According to him, water is being distributed and a drought relief plan will be implement after assessing the future weather.

According to the DMC, 288,193 people and 90,381 families have been badly affected by the drought. It says that 216,018 people are suffering in the Puttalam District, followed by Kurunegala District with 50,918 people badly affected.

The director of irrigation water management and training, W B Palugaswewa, said farmers in Mannar, Vavuniya, Puttalam and Kurunegala can not get involved in large-scale cultivation.

“The new concept we promote is the maximum use of rain water and a small fraction of tank water. This was implemented in the Ampara District and about 120,000 acres were cultivated,’’ he said.

However, according to him, this concept cannot be practised everywhere due to the fluctuation in the rainfall.

“According to our forecast, Sri Lanka can expect drought conditions until 2020 and it will ease after that,’’ he said.

Kurunegala farmer Sanjeewa Karunasagra, said five seasons had not been cultivated over two years. Farmers are deep in debt. Some farmers have switched to coconut cultivation but production has dropped.

T. B. Sarath, the secretary of the All-Island Farmers Federation of Polonnaruwa, said 50% to 70% of paddy land was cultivated in the past growing seasons and this was enough to meet the country’s demand of 2.8 million metric tonnes of paddy.

But now less than 2 million metric tonnes of paddy were available, which has also resulted in rising prices.