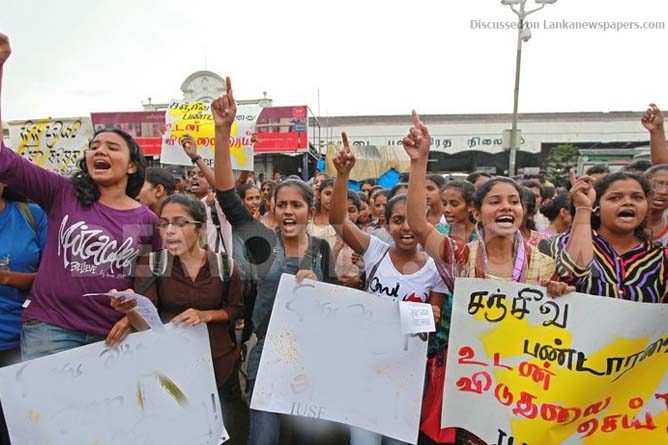 Inter University Students’ Federation (IUSF) yesterday warned the government that they would surround Parliament and the President’s House if the government did not withdraw the decision to enrol the SAITM medical students at Kotelawala Defence University (KDU).

The federation urged the government to enrol the SAITM students at state-run universities instead of the KDU, which IUSF referred as another private university, owned by the government, selling degrees.

Acting Convener of the IUSF, Mangala Maddumage said the SAITM students should be enrolled at the Wayamba University, where the foundation stone had been laid for a new medical faculty.

However, the Wayamba University could only accommodate a maximum of 100 medical students and the SAITM had nearly 1,000 students at present, the IUSF said.

Maddumage stressed that the students should be enrolled in other medical faculties, including the Colombo Medical Faculty.

He said the government was trying to solve the SAITM issue somehow to cover up the humiliating defeat they suffered at the last Local government election.

Asked whether they would protest against KDU for selling medical education after the SAITM, IUSF said they had not yet decided what their next move would be but abolishing SAITM had been their main objective.

The federation also asked the government to release IUSF Convener Lahiru Weerasekera and Inter-University Bhikkhu Federation Convener Tampitiye Sugathananda Thera. It claimed that the government had imprisoned the student leaders, who struggled to save the free education while those who had robbed the Central Bank were still free.

The decision to enrol SAITM medical students at KDU was taken at a meeting chaired by the President and participated by the Attorney General, the Vice Chancellor of the KDU, Dean of the KDU Medical Faculty, and Chairman of the University Grants Commission (UGC).

It was decided to enrol about 1,000 students who are currently studying at the SAITM at the KDU after considering their basic educational qualifications.