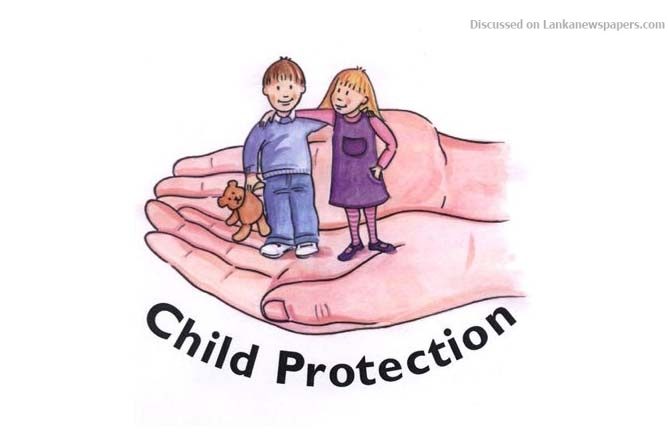 Protecting the rights of every citizen is a necessity. But where do children place themselves in this picture? Children – those who should be nurtured to take the mantle of this world forward- are in most instances the neglected lot. Child protection also takes a similar stance. Sri Lanka ratified the UN Convention on the Rights of the Child on July 12, 1991 and has since taken measures to implement the rights of children within the constraints of the prevailing context and Governmental structures.

The demand by the public for a child protection system received a response from the Government when the latter set up the National Child Protection Authority (NCPA). According to child rights experts, child protection is a non – judgmental, non-adversarial, civil and multi-disciplinary approach which needs to be systematically done in the best interest of the child. But the Daily Mirror learned that creating a chaotic situation in this hallowed institution, summoning of regular meetings had been stopped leading up to various repercussions including the non-allocation of necessary funds, neglecting the payment of salaries to employees, maintenance and most importantly deviating from its primary objective – the protection of the rights children. If the present situation continues and necessary funds are not received, investigations, both new and ongoing, would be hindered.

Hence, the Daily Mirror sheds light on the allegations thrown at the NCPA while also focusing on the NCPA National Policy to be launched this year and thoughts from individuals of varied expertise.

As mentioned before, Sri Lanka was a signatory to the Child Rights Convention (CRC) back in 1990 and this was ratified on July 12, 1991. It was then followed by the preparation of a Children’s Charter approved by the Cabinet of Ministers and establishing of a National Monitoring Committee charged with the responsibility to monitor the CRC and also report to the international CRC committee when required. In December 1996 the Presidential Task Force on child protection was appointed and one of its important recommendations was the establishment of the NCPA by Act No. 50 of 1998 under the Presidential Secretariat. While various functions have been listed as their priorities, the main role of the NCPA is to create a child-friendly and protective environment for the children, free from all forms of abuse.

Back in 2016, the NCPA made headlines over a case where an official was accused of abusing a child. According to sources the incident occurred during a school debating competition organized by the NCPA. The alleged official was said to have had unusual contacts with a school boy in a leading school in Kurunegala for a period of one month. While this official holds a powerful position and is a favourite among those in higher seats at the NCPA, the then Chairperson hasn’t taken any action. With many protests from employees, this individual still remains with the organization. The incident however was swept under the carpet as means of protecting the individual and continuing his service. The Daily Mirror also learned that he had erased vital sources of evidence, so as to mislead the investigation which was carried out. While it is a conflict of interest to house such individuals in a child protection authority, sources also revealed that those in higher positions have gone to extremes to clear the case. This resulted in the removal of responsible officials and appointing people with limited knowledge about child protection to office.

In December 2014, the Cabinet of Ministers issued an important direction to the Ministry of Women and Children’s Affairs and the National Child Protection Authority. (see attached documents) This states inter alia that existing policies are insufficient to ensure child protection; that Institutions face 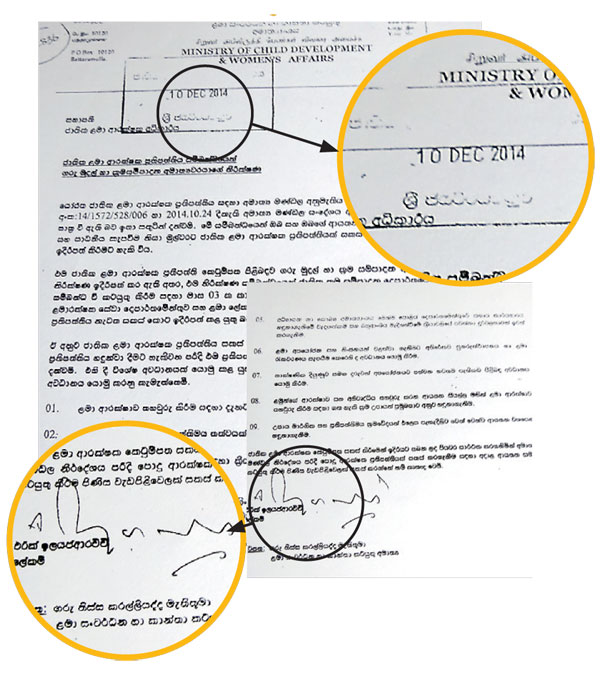 difficulties in giving effect to current policies; that all State institutions engaged in ensuring the protection of children must act upon a common agreement and that an integrated mechanism must deal with child care, protection and rehabilitation. Hence it shows that before the NCPA officers made their demand this year, this has always been the Government policy which is clear as the Act. But in a different turn of events, a final version of the NCPA National Policy is currently being drafted by a Committee headed by its Founder Chairman Prof. Harendra De Silva. When asked why this Policy needs to be drafted when there’s a Cabinet direction and an Act, Prof. Harendra said that he was not in office in 2014 and that previous plans hadn’t been accepted so far.

Airing his concerns to the Daily Mirror, former NCPA Deputy Chairman Sajeeva Samaranayake who was sacked in an unwelcomed move by the President last year said that it is a must to re-educate all sectors of society that child protection is not a media-based event, but a process and crisis intervention in the life of a child. “This process must have a clear beginning and a measurable outcome for the child. State resources committed to child protection must be utilized wisely to integrate this process into our existing public service system. The child protection process has clearly identified steps and each one must be carefully developed with the officers concerned, so that interfaces between departments are managed and two officers – for example a teacher and police officer, are able to cooperate for the sake of the child. Other activities carried out under the banner of child protection, which are limited, ad hoc, uncoordinated and un-sustainable are simply ‘other activities’ and they have no direct relevance to the actual children who need protection,”said Samaranayake.

He further said that there is no magic in the word ‘policy.’ “A policy for child protection must give ownership to all public services relating to child protection and make space to facilitate their working together and developing a common agreement and a pool of expertise on the subject in the long run. This must be a seriously worked out process that builds the learning capacity and professionalism of direct service providers. No single document can do this. However, the Human Rights Action Plan 2017-21 has outlined a process to attain this objective. That Plan should not be confined to paper,” Samaranayake suggested.

Employees Association of NCPA (EANCPA) Media Secretary Pradeep Coswatte said that three executive committee meetings for 2018 hadn’t been held so far. “As a result, the NCPA Action Plan has not been passed and the treasury cannot allocate funds for NCPA projects. Therefore payments of employees, investigations conducted for complaints coming through the helpline and other important activities are now being affected. It has been observed that the director board hasn’t shown an interest to attend meetings presided by the Chairperson and when the NCPA secretary attempted to call meetings, the Chairperson didn’t allow it as well. With all these irregularities, the Association is now at a dormant stage and everybody from the President, Prime Minister and the subject minister should be responsible for this situation. It was the President himself who elected the present Chairperson and the Association doesn’t seem to be moving ahead with its plan. However on the contrary, the current Chairperson is trying to highlight various projects that the NCPA has planned for the year to cover-up this chaotic situation from the public,”said Coswatte.

In response to these allegations, Marini De Livera, Chairperson of the NCPA said that certain parties are trying to create chaos within the organization. “Certain parties are surprised to see a Government institution functioning so well and therefore they are trying to sling mud at us. I have even appeared in courts for a child who has undergone corporal punishment. We have received foreign funding and we have planned out various activities for the betterment of children. Sadly, all perpetrators have been supported in the past and they now claim to be powerful. Therefore some sabotage has been done to prevent meetings and block treasury funds coming in to carry these activities forward. We are committed to protect the rights of every child and currently we are doing a cleaning up process to eliminate those who have hidden agendas and are trying to bring our reputation down,” said Livera.

When asked about the incident when an NCPA official was allegedly involved with keeping unusual contacts with a schoolboy, Livera further questioned how one can build up a case without a complaint from the parents or the schoolboy. “There are vicious elements trying to sling mud at us, but we are unafraid and we will certainly move forward,” she said.

The Daily Mirror also spoke to Dr. Hiranthi Wijemanne, former NCPA Chairperson and Vice Chairperson of the UN Monitoring Committee on the Rights of the Child, who responded by saying that the NCPA focuses on protecting the rights of a child. “Therefore an abuse, neglect, corporal punishment or other similar matters are taken into consideration. Unfortunately the rights of a child haven’t been recognized. Initially the NCPA was under the Presidential Secretariat and it had more powers. But with the change in regimes it was included as an organization under the Child Development and Women’s Affairs Ministry. With that it was no more a powerful institution like in the past that could send a letter on a Presidential secretariat letterhead. Unfortunately, the Ministry and the NCPA don’t have a good relationship and there are certain challenges faced by the NCPA as at now. However it’s the responsibility of the Ministry to be involved with its activities and continue to work for the betterment of the children.

Their responsibility is greater because it is the children who are involved on the other end. There’s something wrong with the system and time has now come to investigate these irregularities, probe into any pressing issues and clear the doubts of the public. It’s important to set targets and work towards achieving them. There has to be a performance evaluation process and regulation of guidelines within the Association. The staff should be held accountable, but unfortunately things have got diluted along the way. It’s important to table a new set of recommendations and implement any plans that have been discussed. But it’s my duty to say that every day lost in taking an action, whether it’s a case of an abuse, neglect or other issue relating to a child, it impacts an entire generation.”