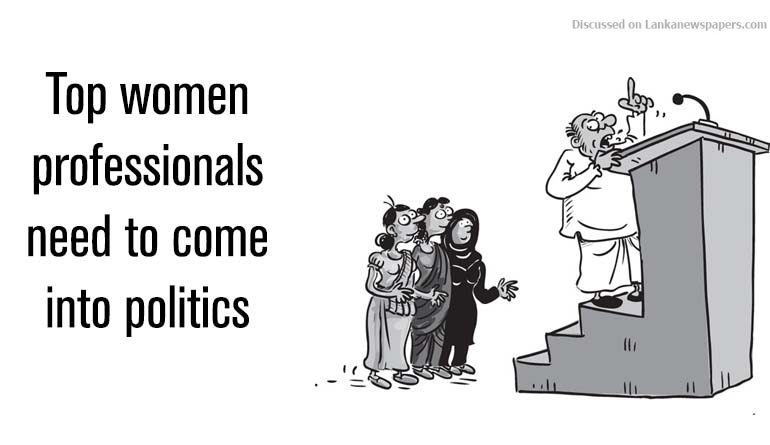 In today’s crucial and countrywide elections to 341 local councils, a significant feature will be the 25% representation for women for the first time since Sri Lanka achieved universal adult franchise more than 80 years ago. While acknowledging this as a positive first step towards gender equality which is vital for the evolution of a just and fair society most people and social analysts complain they are still not aware who the women representatives are.
Though in population terms, women comprise about 53%, their representation in parliament has been drastically if not disastrously as low as about 5%. This imbalance and injustice are now being rectified but most social analysts say that while there are highly qualified women in vital fields such as medicine and science, law, engineering, technology and related fields, few if any of them are on the nomination lists of major parties.
Sri Lanka has the world record and distinction of having the first woman prime minister Sirimavo Bandaranaike to rule the country as head of government from 1960 to 1964 and again from 1970 to 1977. Her daughter Chandrika Bandaranaike Kumaratunga was also our first and only woman executive president from 1994 to 2005. But overall the women’s role or say in decision-making at national and local government levels has been minimal and therefore, most of the decisions may have been flawed or unjust. Thus far most of the women entering politics have come from political families starting with the “weeping widow” image the world gave to Sirimavo Bandaranaike. We hope that as the women’s role evolves we will see more medical doctors, engineers and other top professionals daring to step into the political field.
Most analysts also believe that with more professional and highly qualified women coming into politics, we may see more honesty and integrity, less bribery, corruption and other serious frauds. With mothers also coming in, we are also likely to see more care and concern for the needs and wishes of the people of the country instead of the current crisis where most men are apparently coming into politics to grab and not to give while the plunder of public resources has reached unprecedented proportions.
The United Nations says, Science and gender equality are vital for the achievement of the internationally agreed development goals, including the 2030 Agenda for Sustainable Development. Sri Lanka’s women and especially those who enter politics need to remember this. The global community has made a lot of effort in inspiring and engaging women and girls in science.

Unfortunately, women and girls continue to be excluded from participating fully in science. According to a study conducted in 14 countries, the probability of female students graduating with a Bachelor’s degree, Master’s degree and Doctor’s degree in science-related fields is 18%, 8% and 2% respectively, while the percentages of male students are 37%, 18% and 6%.
To achieve full and equal access to and participation in science for women and girls and further achieve gender equality and the empowerment of women and girls, the UN General Assembly  adopted a resolution declaring February 11 February as International Day of Women and Girls in Science.
A significant gender gap has persisted throughout the years at all levels of science, technology, engineering and mathematics (STEM) disciplines all over the world. Even though women have made tremendous progress towards increasing their participation in higher education, they are still underrepresented in these fields.
Gender equality has always been a core issue for the UN. Gender equality and the empowerment of women and girls will make a crucial contribution not only to economic development of the world, but to progress across all the goals and targets of the 2030 Agenda for Sustainable Development. On March 14, 2011, the Commission on the Status of Women adopted a report at its 55th session, with agreed conclusions on access and participation of women and girls in education, training and science and technology and for the promotion of women’s equal access to full employment and decent work.
So we hope that with the 25% representation of women now in local councils, and later in provincial councils and the Central Government also, we will see not only gender equality and empowerment of women but also a better quality of leadership with less corruption and more caring for and sharing with others.