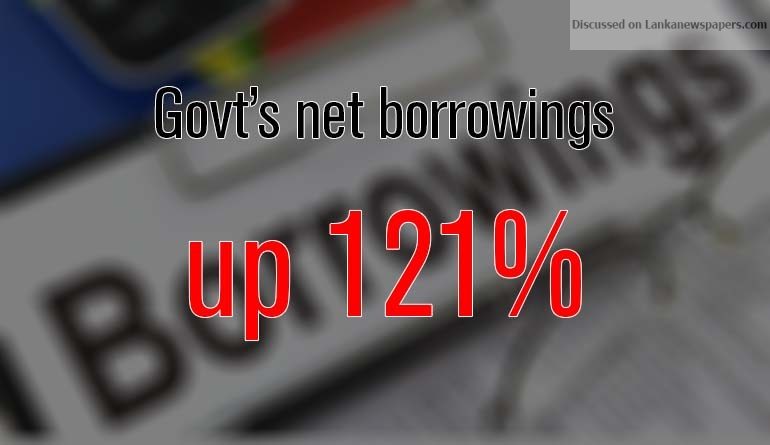 Last year, during the same period, the Government’s net borrowings amounted to a mere Rs 147,057.21 million.

The probable reason in increased borrowings may be adduced from what Prime Minister Ranil Wickremesinghe, speaking at a function in Colombo on 8 February said. He said, “In the five year period from the current and up to 2022, Sri Lanka’s debt servicing commitments amounted to US$

9 billion as foreign obligations and a further Rs 2 trillion in reference to the honouring of Treasury (T) Bond maturities.”

The present net borrowings included Rs 148,500 million in the form of issuing T Bills, Rs 80,000 million T Bond borrowings, US$ 470.57 million (Rs 72,656.01 million) Sri Lanka Development Bond (SLDB) borrowings (The conversions are based on the middle rate of the closing price of the benchmark ‘spot’ as at 8 February which was Rs 154.40 to the US Dollar) and Rs 23,294.98 million in the form of money printing (MP) vis-à-vis the Central Bank of Sri Lanka’s (CBSL’s) open market operations (OMO).

In the corresponding period last year, the GoSL’s total net borrowings included Rs 131,755 million via the issuance of T Bills, Rs 65,512 million T Bond borrowings and US$ 458 million (Rs 69,501.50 million) SLDB borrowings (The conversions are based on the then administered ‘spot’ which closed at Rs 151.75 to the Dollar as at 8 February, 2017). Additionally, the CBSL retired maturing MP issues totaling Rs 119,711.29 million in the review period vis-à-vis its OMO, which value is taken as a debit in the computation of the GoSL’s net borrowings from 1 January, 2017 to 8 February, 2017.

‘Spot’ trades are settled after two market days from the date of transaction. The CBSL deals in ‘spot.’ The ‘spot’ at times is controlled to minimize Sri Lanka’s Rupee debt costs. Usually the Treasury is bereft of Dollars unless it has raised Dollars by way of a syndicated loan or by a sovereign bond or by issuing SLDBs or by a similar such vehicle.

Nonetheless, more often than not, such costs are met from the CBSL’s foreign reserves after buying the required greenbacks by paying the CBSL its Rupee value in ‘spot’ equivalents. Therefore, a weak ‘spot’ will only inflate the GoSL’s Rupee debt stock. To prevent such a scenario, the GoSL exerts moral suasion (a non-official monetary policy tool used by Governments to persuade financial institutions to follow suggested guidelines on the availability of credit and its cost) on the ‘spot’, like what happened on 8 February, 2017. However, currently, the ‘spot’ operates in a liberalized environment.

The interbank foreign exchange market is avoided to meet the GoSL’s foreign debt servicing commitments for fear that such would cause depreciative pressure on the Rupee.