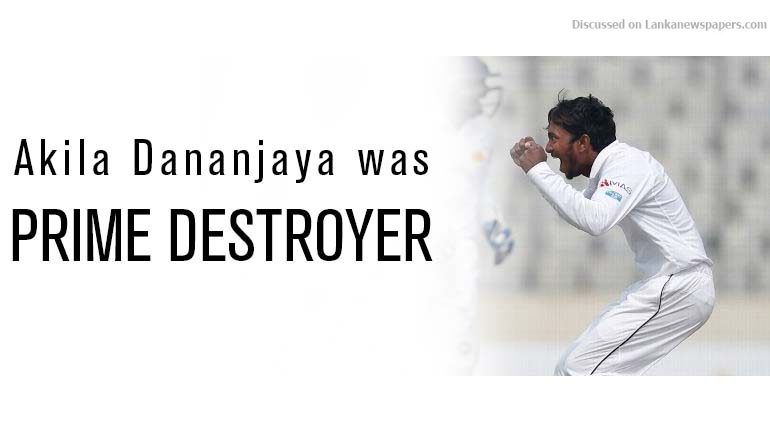 Bangladesh plunged, Sri Lanka’s spinners soared and the Mirpur Test tore to its conclusion midway through day three, the visitors triumphing by 215 runs. Debutant Akila Dananjaya was prime destroyer. He scythed rapidly through the Bangladesh lower-middle order, taking 5 for 24 to make it eight wickets on debut – the best performance by a Sri Lankan on debut. The charge to victory was also sweet for Rangana Herath, who claimed 4 for 49 and in doing so, became the most successful left-arm bowler in Test history.

After even Sri Lanka’s lower order had batted with a little mettle, the rate of Bangladesh’s demise in this Test will irk the hosts. Only four batsmen made it into double figures, and no one batted for longer than 51 deliveries. The pitch was as treacherous as ever, but chances were too freely given. Perhaps, chasing a highly improbable 339, and with little chance of saving the game, the futility of their situation contributed to their meekness. It took Sri Lanka fewer than 30 overs to clean the opposition up. This was Bangladesh’s first series defeat at home since 2015 – the absence of Shakib Al Hasan keenly felt.

The selection of Dananjaya – out of all Sri Lanka’s teams until seven months ago, and considered a limited-overs specialist in any case – has proved to be a spectacular move in this Test. Though he bowled only 15 overs in the game (fewer than either of the senior spinners), the overspin he puts on the ball made him a menacing prospect. Repeatedly he had balls leap up off a length, and one such ball struck Liton Das in the glove, and was caught at short leg. Sabbir Rahman was also caught off his glove; Mahmudullah edged another Dananjaya delivery that jumped at him; and Mehidy Hasan nicked a straighter delivery. Wicketkeeper Niroshan Dickwella helped Dananjaya along to his maiden five-wicket haul. He pulled off a fast stumping of Abdur Razzak when the batsman had merely overbalanced. Dananjaya’s 8 for 44 comprise the best debut figures for a Sri Lanka bowler.

While Dananjaya took care of the lower half of the Bangladesh batting order, Herath’s best work had come earlier on. One ball after he had been tonked for six by Imrul Kayes, he sent a slider at the batsman, and had him edging behind. Mominul Haque – again Bangladesh’s best batsman – was given a light working over, and eventually nicked Herath to Dickwella as well. The wicket that sealed the match was also Herath’s. Taijul Islam aimed a gigantic heave over cow corner, but Danushka Gunathilaka was at the boundary to take an outstanding overhead catch. Bangladesh had lost their last five wickets in the space of 33 balls.

The visitors’ lead had been 312 even at the beginning of the day – much more than necessary, as it would turn out – but their batting in the first 50 minutes of the day was more indication that this Sri Lanka Test side is rediscovering a little of its old grit. Roshen Silva, the newest member of the top order, added 12 to his overnight score, while Suranga Lakmal, living a little more dangerously, struck boundaries to help swell Sri Lanka’s lead by 26. Only one Bangladesh partnership – the 46-run second-wicket association between Mominul and Kayes – was better than this 36-run stand between Roshen and Lakmal. That Chandika Hathurusingha, their coach only four months ago, helped plan their own downfall in this series, will of course sting.