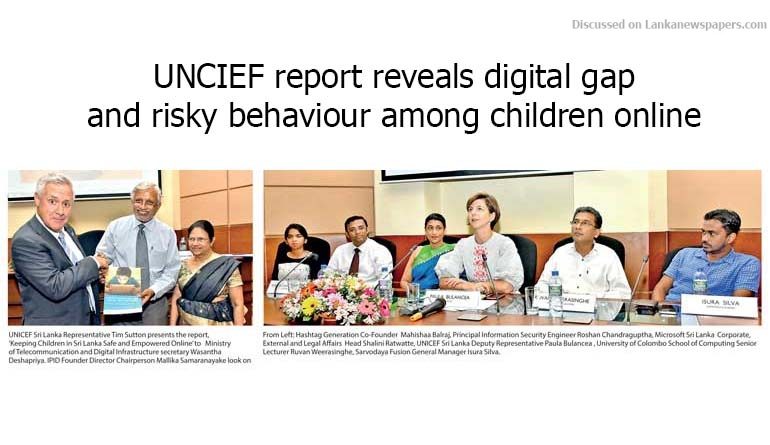 In addition to revealing what it called a significant digital divide among young Sri Lankans, a new UNICEF study has highlighted disconcerting statistics on children engaging in risky behaviour online.

A report released by UNICEF yesterday, titled ‘Keeping Children Safe and Empowered Online: A study on Sri Lanka’s digital landscape’, indicated that 46.3% of some 5,000 children polled had communicated with strangers online. Over 15% had shared their private information with strangers, while 28% had met them in person – 18.3% of whom had done so without informing family or friends.

The reasons for these meetings are unclear, however, and the report does not specify whether the strangers in question were adults.

Says the report: “Around 27.9% of children online had physically met people that they had first met online. Another 25.2% of online-IT users anticipated meeting in person in the future. This user group was composed of more boys than girls. Although the study did not probe deeper into the ages of those individuals that the children had met up with, most of those who reported having met someone indicated that these people fell into the category of someone they had befriended, or someone related to a job offer or social activity, like a club or organisation, rather than a person for a prospective romantic relationship.

“Of the children who had physically met online-strangers, 18.3% (boys and girls) had done so without informing anyone, and another 36.3% had only informed a friend, underscoring the degree of risk these user children were being exposed to.”

According to the report, a substantial proportion of children with internet access are engaged in what it calls risky behaviour. Exacerbating this is an alarming lack of awareness with respect to privacy.

“One in ten children (a considerably higher percentage of boys) admitted that they had sent/uploaded content inappropriate for their age, which included photos and videos. The proportion of such children increased slightly from Grades 6-9 to the advanced level, but the percentage of girls remained low throughout (about 3%). A much higher percentage of Muslim (16.2%) and Tamil (15.4%) children, almost double that of the Sinhalese children (8.6%) were accessing content that could put them at risk,” the report said.

Some 40% of the online children polled have admitted to sharing photos including personal photos as well as personal information with strangers, in addition to accepting chat requests from people they had not encountered before.

“Though this study did not look into the type of strangers that children interacted with, or the nature of their interactions, these types of behaviour can expose children to sexual predators or harmful online communities. These interactions captured above could have been between children or adults, but this was not verified in this research. Furthermore, children admitted to sharing their own photos with strangers. These findings are in line with the harmful and often illegal online activities described in the International Telecommunication Union (ITU) guideline,” said the report.

The study also reveals that some children have a tendency to engage in unethical behaviour online.

“Nearly a quarter of online-IT users admitted to inappropriate conduct such as lying, sharing false information, sending messages that could hurt someone else, or admitted to using others’ passwords to log into their accounts. Such activities constituted unethical and unlawful behaviour.”

According to the report, while 52.8% of young people in Sri Lanka access the internet – with the average age of first access being 13 years – there is a significant disparity along lines of gender, geographic location and economic wellbeing.

Among the 11-18 year age group, 67.6% of the boys polled were online, while only 33.1% of girls had access to the internet. Regional variances, as highlighted in the report, show that 67.8% of respondents from urban areas were online users, compared to 47.1% from rural locations and just 39.3% from plantation areas.

A majority of children are getting online without adult supervision. According to the study, 53.6% of child internet users were ‘self-taught’ about the internet, compared to the 16.5% who had been taught by their parents.

“With an estimated 6.7 million internet users in Sri Lanka in 2018 representing 32% of the total population, a rise from 4 million in 2015, internet usage is growing across all age groups.  Yet whilst 28.3% of people in Sri Lanka are ‘computer literate’, this differs substantially by age, rising to 60.7% of 15-19-year-olds compared to just 19.9% of 40 to 49-year-olds. This represents a rise in overall computer literacy, across all age groups since the report data was collected in 2015,” UNICEF said in a press release.

Speaking at event marking the release of the report, UNICEF Sri Lanka Country Representative Tim Stutton stressed on the need to ensure equitable access to the internet, with a focus on online safety.

“Firstly, we must ensure equitable access to the internet and digital technologies for all young people – especially girls, the poor and those in rural areas, because equity of access ensures that all children can benefit from the opportunities these technologies unlock. We cannot allow a ‘digital divide’ to establish, grow and limit the life and employment prospects of a huge proportion of our young people,” said Stutton.

“Secondly, we need to focus on online safety, by increasing the knowledge of both young people, and vitally their parents, teachers and caregivers, so that they have the tools to handle the new risks these technologies can bring including, the misuse of private information, cyber-bullying and exposure to harmful content,” he added.

Stutton also highlighted the need to build digital literacy to ensure that young people make the most of digital technologies.

“We know that access to a wealth of information at one’s fingertips without the knowledge needed to interpret this information can be, at worst, destructive and destabilising to young people, and frankly to whole societies. At the same time, the internet offers a forum and an opportunity to facilitate constructive dialogue between differing groups, and the chance to find common ground. For Sri Lanka, as we continue on our peace-building and reconciliation journey, this is even more vital,” he said.

Telecommunication and Digital Infrastructure Ministry Secretary Wasantha Deshapriya, who also spoke at the event held at the Institute of Policy Studies (IPS), said the absence of control or policing on the internet could leave young users open to risk.

“In Sri Lanka, children have to be over 15 to apply for a national identity card. But when it comes to the internet, the only prerequisite for many children is the ability to use a mouse or a swipe a touch pad. This results in a huge uncontrolled openness that isn’t policed at all.”

Deshapriya hastened to add, however, that he is not calling for the internet to be policed.

“This is not to suggest that the internet should be a no-go zone for children. However, because the web has no borders, it is largely unregulated and potentially risky,” he said.

On the other hand, he said, being risk-taking and adventurous means that young people as a group can be a very “volatile” mix.

“Their brains are still developing, and they’re prone to making rash decisions and behaving impulsively without considering the consequences of their actions. Their immaturity is aggravated by the anonymity and distance offered by the web,” he added.

This status quo encourages users to do things online that Deshapriya said they wouldn’t dream of doing in the real world. The absence of borders and names and proximity, he said, opens up the possibility for unsuspecting young users to wander into traps.

Noting that there is little methodical research done in Sri Lanka with regard to cyber bullying, Deshapriya said that, despite this, cyber bullying can have serious effects on children due to the high visibility and the immeasurably large audience the internet offers.

He called on parents and elders to ensure that children navigate the internet safely and responsibly.

“With virtually no one to police the web, parents have a role to play, as well society and elders, in ensuring that children are responsible digital citizens who engage in online activities safely,” he said.