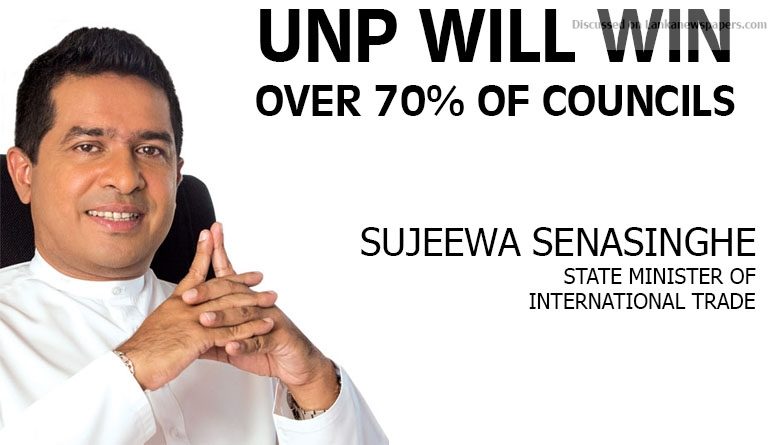 State Minister of International Trade Sujeewa Senasinghe says, everybody expects the UNP to do everything, above perfection. In an interview with the Sunday Observer the State Minister said, it has been revealed that Thajudeen’s murder and Lasantha’s murder had been committed by a special Army unit which unfortunately, nobody is questioning. Everybody is pointing an accusing finger at the UNP for everything. It is difficult to understand why there should be such double standards in the country. It is a predicament. Everybody expects the UNP to be God. Three of our Ministers have already resigned. What more than that?

Q: How will the Bond Commission revelations affect the UNP at the February 10 LG polls? Don’t you think the action taken against former Finance Minister Ravi Karunanayake is a little too late?

A: Before the Bond Commission report there were lots of doubts in people’s minds because they didn’t understand exactly what the Bond scam was. I brought this documentation in the COPE. The COPE Chairman Sunil Handuneththi and others were against it. That is why we had to bring in footnotes. The Presidential Commission has held that all the footnotes were correct. Technically, they were correct. That is how we brought in the 2008 documentations too, to say that the Rajapaksa Government at that time had not obtained approval for giving direct placements to Perpetual Treasuries. Private dealers were never given permission to buy direct placements of Bond. But without any authority, they did so from 2008 to 2015. Even though it was not their mandate, the Presidential Commission held, the real losses were from 2008 to 2015 amounting to Rs.4,000 million. Now the people realize, it was actually the Rajapaksa Government which committed this crime. After 2015, any irregularities found have been directed to the AG’s Department and Rs.12 billion is being held, so that, action can be filed against any irregularity, and the money recovered.

We have to move in on Ravi Karunanayake’s case. Although there is an allegation, we don’t know what happened, there must be some explanation. No court has held him wrong. Also, no action have been taken against wrongdoings during the Rajapaksa regime. They have also not taken action against the Uva Province Chief Minister who asked a Tamil school Principal to kneel. Everybody expects the UNP to do everything above perfection. It has been found that even Thajudeen’s murder and Lasantha’s murder, were carried out by a special Army unit. Nobody is questioning those acts. Everybody is pin pointing the UNP for everything. Why this double standard? It’s a predicament. Everybody expects the UNP to be God. Three of our Ministers have resigned. What more than that?

Q: There seems to be a lot of tension between the UNP and the SLFP, especially, over the corruption issue. Do you think it would affect the chances of the Yahapalana Government continuing till 2020?

A: Actually there is no tension. Both SLFP factions are losers. Now they want President Maithripala Sirisena, while they are the very people who had been with the Rajapaksas. They are poisoning President Sirisena because they don’t want this Government to move forward with all the developments coming up this year. We expect two and a half billion US Dollars as foreign investment. In 2001, the then Chandrika Bandaranaike Kumaratunga Government left a legacy of a minus 1.5 percent economy to Ranil Wickremesinghe and he brought it up to plus 6.2 percent in two years. The beginning is difficult, but now we have laid the foundation. Most of the SLFP jokers have been with the Rajapaksas. They want to upset the apple cart! There is no corruption during the two year period of this Government. All corrupt people are with them. Even the former Rajapaksa regime had issues. This Government too has some issues. After the election, the President and the Prime Minister will realize they have to move forward for the sake of the country. They will not forget the past, they must remember what the Rajapaksas brought to the country. They have to decide whether they are going to continue with the hoodlum, murder, robbery, and lack of democracy.

Q: The new electoral system is yet untested. How do you think the UNP will perform under the new system? Will you be able to win most of the Councils?

A: Definitely, we will win most of the Councils. But the problem is this system. After winning how would the Municipalities and Urban Councils be formed? It is not very clear. So the system would have to be tested after the election. However, the UNP will win over 70 percent of the Councils.

Q: The Pohottuwa has emerged as a new political force and is already boasting of a good performance. But it has also the effect of dividing the SLFP vote. Do you see an obvious advantage in this division, for the UNP?

A: Definitely. Now, the Rajapaksas are divided in the family because Basil, Gotabaya, Namal and Mahinda are on different sides. After the election, there will be further divisions. It is the end of the SLFP, as it seems. After 23 years, this is really the beginning of the UNP. Most of our former leaders were killed by the LTTE. Last time, out of 4,400, we had only 1,100 Urban Council members. However, this time, out of 8,400, we will have over 6,000 members.

Q: Will the parliamentary debate on corruption based on the two Presidential Commission reports have a big impact on how the people are going to vote?

A: It will not. The people are not really bothered. They know who the rogues are and who are not. The people will know this is the last time they will sling mud at the UNP. The Commission has said, rogues were there from 2008 to 2015.