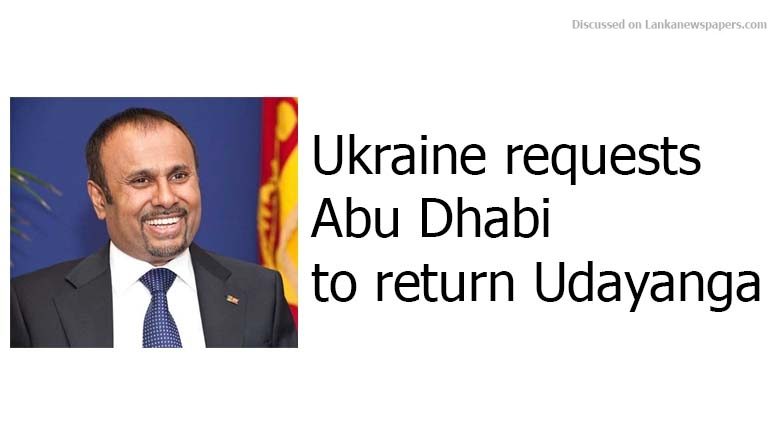 Weeratunga who was detained in Dubai on Sunday (4) while in transit to the United States was later transferred to the authorities in Abu Dhabi by the Immigration and Emigration officers as per an INTERPOL warrant issued.

He was accused in a probe into the acquisition of MiG-27 fighter jets from Ukraine, while he was also accused of supplying weapons to anti-Government forces in several countries and was absconding the Sri Lankan authorities using a Sri Lankan Diplomat Passport.

Meanwhile, Police Media Spokesman Ruwan Gunasekara said that a special investigation team was to leave for Abu Dhabi this evening to hold discussions with the Abu Dhabi authorities over the possibility of extraditing the former envoy to Sri Lanka.

The team that is to be sent to Abu Dhabi consists of seven officers including a Financial Crime Investigation (FCID) officer, two senior officers from the Attorney General’s Department, an Immigration and Emigration officer, two Criminal Investigation Division (CID) Officers and an official from Ministry of Foreign Affairs.

Although reports said that a red warrant had been issued to arrest Mr. Weeratunga, reliable sources told Daily Mirror that only a blue warrant had been approved by the INTERPOL which only permits “to collect additional information about a person’s identity, location or activities in relation to a crime”.

However, addressing a public meeting in Galle today, Law and Order Minister Sagala Ratnayake said Sri Lanka is to request the Abu Dhabi government to return the accused ex-diplomat to Sri Lanka as soon as possible.