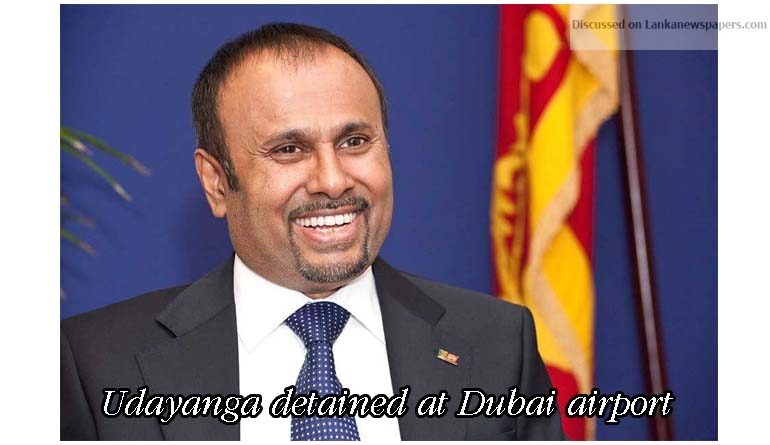 Former Sri Lankan Ambassador to Russia Udayanga Weeratunga had been reportedly detained at the Dubai Airport this morning, while in transit to the United States, sources said.

He was to be handed over to the Dubai Police by the immigration officers.

Udayanga Weeratunga, Sri Lanka’s former envoy to Russia was accused of being the centre of a probe into the acquisition of MiG-27 fighter jets from Ukraine, while he was also accused of supplying weapons to anti-Government forces.

Interpol arrest warrant was taken in October 2016 following an FCID request made to the Colombo Fort Magistrate.

On January 04, 2017 Colombo Fort Magistrate Lanka Jayaratne ordered to suspend the transactions of 16 bank accounts with a balance of USD 1.5 million funds kept by Mr Weeratunga over the inquiry conducted into the huge financial loss caused to the Government in the purchase of Ukraine-built MIG-27 aircraft in 2006.

Fort Magistrate Lanka Jayaratne on January 19 directed Attanagalle and Colombo Land Registrars to prevent the sale of Udayanga Weeratunga’s properties found by the FCID, where Rs.40 million and a one-acre land worth of Rs.25 million in Dompe and a luxury apartment (Trillium Residencies) worth Rs.29 million in Borella.

On August 21, 2017, Weeratunga’s request to annul the arrest order was rejected by Magistrate Lanka Jayaratne.

However, Police sources told the Daily Mirror that although Mr Weeratunga was detained at the Dubai Airport it would take a considerable period to return him to country due to diplomatic and legal concerns.