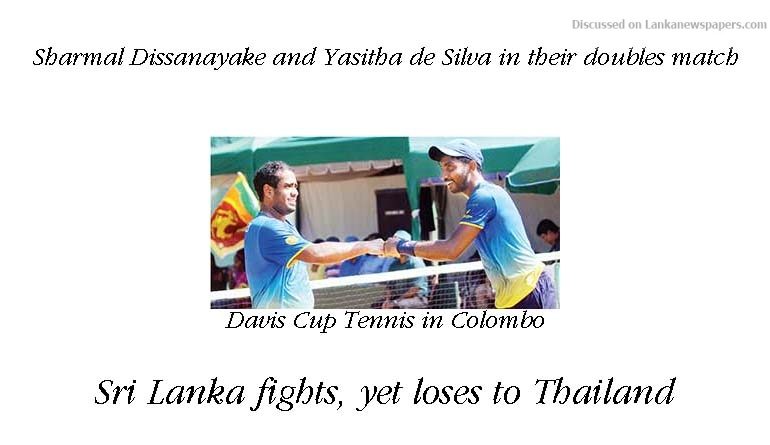 Sans the services of their key player, Harshana Godamanna, all expected a one-sided affair yet Sri Lanka gave the visiting Thais a fight for their money when the young-look hosts carried the tie till the last rubber on Sunday, February 4, in their Asia-Oceania Zone Group-II 1st Round Davis Cup encounter,sponsored by BNP Paribas, at the SLTA clay courts, Colombo.

Thailand which featured a top-500 singles player in Wishaya Trongcharoenchaikul and a world renowned doubles pair in the Ratiwatana twins, Sanchai and Sonchat, lost a singles on Saturday and the doubles on Sunday, in the best-of-five-match tie to make the encounter wide open before the last singles. Sonchat didn’t play the doubles due to a sudden illness.

Thai No.2 Jirat Navasirisomboon was fresh for this deciding singles as Sri Lanka’s No.2 Yasithade Silva was after the morning’s doubles where he partnered Sharmal Dissanayake.There was no major difference between the two players, Jirat and Yasitha, on record yet the more experienced Jirat cruised to 6-2 after winning the first set 7-5, thus qualifying his country for next April’s round-2 where the winning nation will be through to next year’s zonal Group-I. The Philippines who beat Indonesia also on Sunday in Jakarta will be Thailand’s opponents in this tie, to be played in the Philippines on April 7 and 8.

Sunday’s 3-2 loss will make Sri Lanka’s chances of staying in Group-II for 2019 very slim as their opponents, Indonesia, whom they will meet in Colombo on April 7 and 8 in what is named the relegation play-off is stronger having beaten them 5-0 in their last and only Davis Cup meeting, in July 2016 in Surakarta, Indonesia.That time even Godamanna too played for Sri Lanka yet they couldn’t win at least a single set in the entire tie.

Sunday’s tie against Thailand, though, was one that was exciting and reminiscent of the 2016 1st round tie between the same two nations played in Bangkok. On a sensational final day of that 2016 tie, Dissanayake came back from two sets down to beat Puriwat Chatpatcharoen in a marathon five setter before Godamanna fought and lost against Pruchya Isaro, after being one-set-all, in the decider.

In Sunday’s doubles, Dissanayake and de Silva capitalised on the non availability of Sonchat Ratiwatana, the 110 in the world, and finished the match just over an hour, completely dominating the Thai duo on both serve and rally. Sri Lanka smartly switched her fourth singles player, giving national colours to Alex Fairbanks naming him in place of Dissanayake, virtually committing the match played against Thai no.1 while aiming the victory in the fifth and final singles which de Silva played.

Sri Lanka has been on and off from the strong Davis Cup Group-II after they re-entered into it in 2009 following long-time stagnation —for over a decade— in both Group-III and IV.