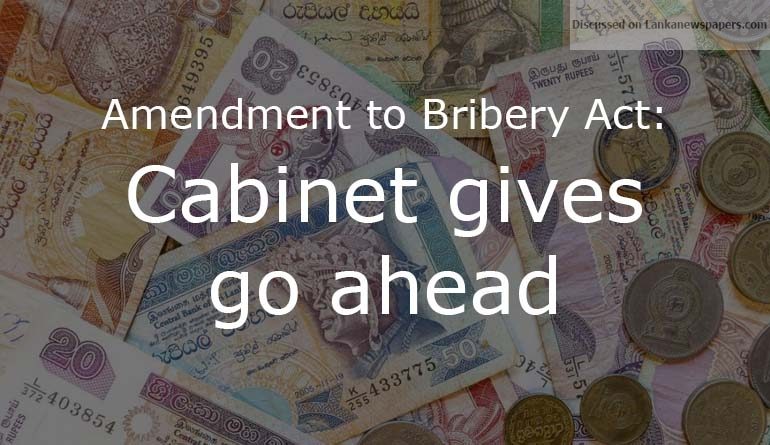 Cabinet has given the go ahead to amend a Section of the Bribery Act, which will allow High Courts to hear bribery and corruption cases.

The proposal presented by President Maithripala Sirisena to amend Section 70 of the Bribery Act No. 11 of 1954 was approved by Cabinet when it convened on 30 January. The amendment to the legislation, if enacted, would empower the High Courts of the country to hear cases of fraud and corruption as defined under the Bribery Act and the Prevention of Money Laundering Act.

Meanwhile, the Draft Bill to establish a three-member special High Court, that would address allegations of fraud and high profile corruption cases, by amending the Judicature Act No. 2 of 1978, compiled by the Legal Draftsman’s Department and cleared by the Attorney General, was approved by Cabinet.

Through Cabinet approval, the Draft Bill will be gazetted and produced for Parliamentary approval as per the proposal made by Minister of Justice Thalatha Atukorale, during the last Cabinet meeting.

Cabinet acknowledged the Bill prepared by the Legal Draftsman’s Department to amend the Judicature Act No. 2 of 1978 to establish a three-Judge High Court Bench to advance the proceedings of cases related to complex financial crimes, bribery and corruption allegations on 16 January. The Draft Bill, subsequently referred to the Attorney General that week, will determine the nature of the crime, the severity, the complexity, the impact on the Government and the victims, and on national welfare, in order to assist the procedures followed by the Attorney General and the Director General of the Commission to Investigate Allegations of Bribery or Corruption (CIABOC).