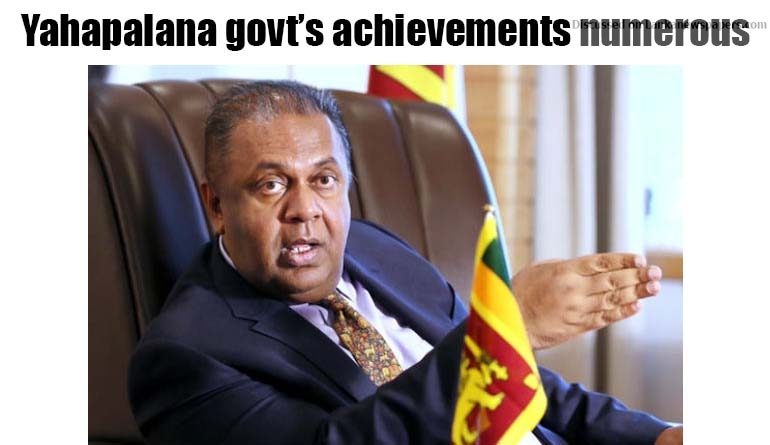 The national unity government, which recently marked the third year in office, has achieved much, Finance and Media Minister Mangala Samaraweera says.

Minister Samaraweera, issuing a media statement said yesterday: “Once again, it is an election that will decide if democratic institutions and traditions, painstakingly rebuilt since January 2015 will be torn down and laid to waste again. It is an election that will determine if Sri Lankans will live free or under the yoke of fear, impunity and grotesque abuse of power by a single family and its henchmen.For this local government election on February 10 is much more than a regional contest to capture political power in urban and municipal precincts. It is an old regime’s first real attempt to recapture power and restore an old, corrupt and dictatorial order.

As memory fades and we are embroiled in the politics of the present, it is easy to forget that once, not so many years ago, a Government shot and killed its citizens for the crime of demanding clean water. We need to ask ourselves, where all the white vans have gone. Where have the grease yakas gone?

We must question why the Government’s political critics and dissidents are not being thrown in jail. Why media organizations are not attacked and burned any longer. Why journalists are not being abducted or killed. Remember the night races – the gift of an indulgent father who wielded.

all the power of his presidential office to ensure his sons could have a good time? Remember the time when young men paid with their lives for the crime of being a rugby rival? Remember when an incompetent brother in law to the President ran the national airline to the ground? Remember how it was impossible to speak openly about the excesses of the ruling family except in hushed whispers not so long ago?

Of course, these are basic freedoms that citizens in any functioning democracy should take for granted. But it must never be forgotten that there is a profound co-relation between the end of this tyranny imposed upon the citizenry and the fall of the Rajapaksa regime in 2015. And it is this culture of extravagance, abuse of state property and state terror

that is trying to make a comeback in the February 10 local government election.

Electoral inroads made in this poll could be used to attempt to recapture national control in future elections. So while the forthcoming election may be a ‘little one’ it has national consequences that could reverberate for years to come, casting long shadows over the lives of Sri Lankans who have begun to live unfettered and free again today. Yes, perhaps we are not where we hoped to be by this time. But we will get there. Change is incremental, political systems are entrenched and sometimes immovable; but the will to change remains as strong as ever. With the Rajapaksa regime and its fellow barbarians at the gates once more, Sri Lanka is at another crossroads at this election. In a way, this makes the choice clearer for all those citizens who want liberty, democracy and peace. On February 10 the people will have to choose once more – will we continue the march to freedom or herald a return to fear?”