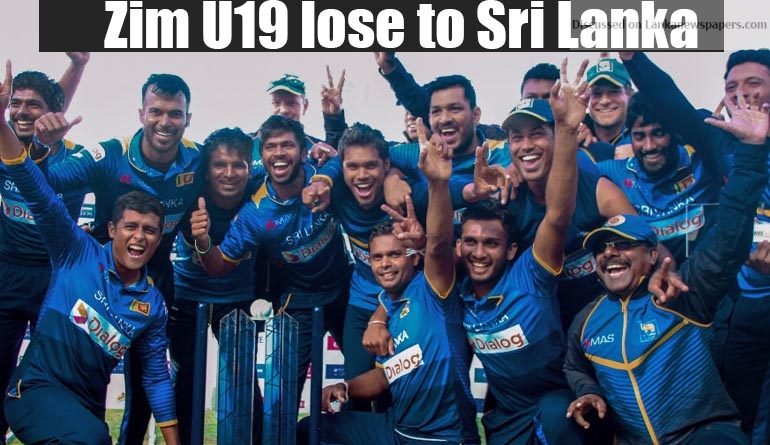 THREE half centuries from the Zimbabwe Under-19 cricket team players were in vain as the youth team fell to Sri Lanka by five-wickets in the semi-final of the Plate competition at the ICC Under-19 Cricket World Cup currently underway in New Zealand. The trio of half-centuries from Donald Mlambo, Jayden Schadendorf and Milton Shumba had helped the Zimbabweans overcome a fourth-ball wicket against Sri Lanka on their way to a competitive score of 259/4 in their allotted 50 overs.

However, an unbeaten century from Sri Lanka’s number three batsman Nishan Madushka (109) crushed the spirits of Stephen Mangongo’s men who had hoped to claim one over a Full member at this year’s tournament.

Up until yesterday, Zimbabwe’s tournament had followed a set pattern – good against the Associates, awful against the Full Members, with 10- and seven-wicket wins against Papua New Guinea and Namibia bookending losses by the same margins against India and Australia, with the African side making a combined 288/20 across both games.

And when they lost their first wicket without scoring against Sri Lanka after just four balls yesterday, it appeared the pattern would continue.

Although they lost, it was a much-improved performance, with Sri Lanka made to work hard for their eventual five-wicket victory.

They began their innings in the worst possible manner yesterday as their best performer Wesley Madhevere was sent back for nought in the opening over.

But after that early setback, Zimbabwe rallied to put on 259/4 thanks to a trio of contrasting half-centuries from their top five.

The first came from opener Mlambo, who, after facing his first ball with his side already one down, decided to drop anchor and provide some ballast for his side.

It wasn’t quick, and it was rarely pretty, but it was exactly what was needed to show that the Sri Lankan attack, though capable, wasn’t to be feared.

The second and best of the performances was made by Schadendorf, whose 74 was equal parts fluent, enterprising, and belligerent and often all at once.

It was checkpointed by four sixes, the second of which brought up his fifty, and though he fell caught at fine leg trying to hit a fifth, by then he’d done his job.

The third came from vice-captain Shumba, who immediately looked to attack, taking just 45 balls to reach his half-century and providing the late surge which took his side past 250.

The ease with which Zimbabwe built partnerships each time should have worried Sri Lanka, with their attack looking largely toothless apart from with the new ball.

But they restricted Zimbabwe well enough up at the beginning of the innings to leave them still in with a chance. — cricinfo.