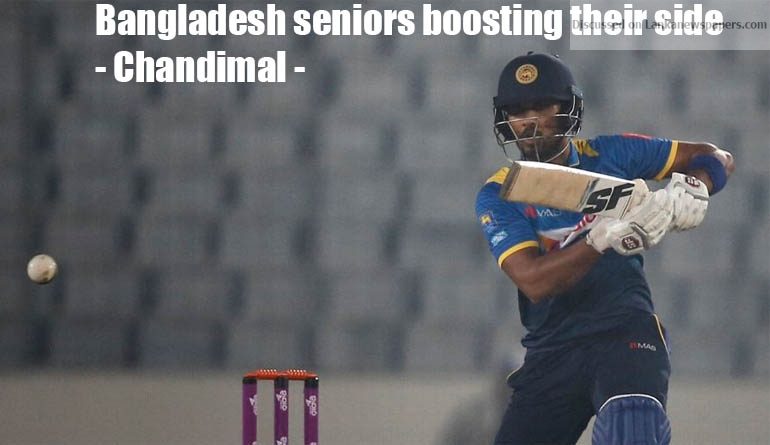 Shouldering responsibility. Bangladesh’s senior players do it. Sri Lanka’s, not so much.

Just look at the tournament charts. Tamim Iqbal tops the run-scorers’ list, with an average of 122. Shakib Al Hasan is third with 155 runs at 51.66. Shakib has also been inspirational on the bowling front, taking nine wickets for 124. And look who else he has for company near the top of that list: Mashrafe Mortaza and Rubel Hossain, who have claimed their wickets for well under 20 apiece as well.

This has been a theme of Bangladesh’s rise in ODIs over the past three years. The Sabbir Rahmans and Soumya Sarkars may light up the odd match, but it is the old hands who man the engine room. If Bangladesh make a big score, you can almost be certain that one or more of Tamim, Shakib or Mushfiqur Rahim has contributed heavily. If they skittle an opposition, Mashrafe has probably played a vital role.

Sri Lanka can only look on with envy. Their three most-experienced men in the squad were Angelo Mathews, Dinesh Chandimal and Upul Tharanga. Of those, Mathews has been injured more often than he has played over the past 18 months, and Chandimal has been in and out of the squad (justifiably). Tharanga, meanwhile, had scored heavily in 2017, but has been modest in this tournament, hashing together 53 runs across three outings. On the eve of a vital fixture between the sides, stand-in captain Chandimal agreed – the output of Bangladesh’s senior players has been instrumental to their success.

“Bangladesh are an outstanding side, and they’ve got some very good players, for example Tamim, Shakib, Mushfiq and Mahmudullah,” Chandimal said. “They are doing their roles – that’s the main thing as senior players. They’ve played now almost eight to ten years in international cricket. I think that’s the advantage they’ve got at the moment. They’re playing some very good cricket now.”

Among other problems for Sri Lanka, however, has been the frequency with which their top players have broken down. Mathews’ travails with various leg injuries are now well-known, but through the course of this tournament, Sri Lanka’s second-highest run-scorer Kusal Perera has picked up a side strain, while fast bowler Nuwan Pradeep is also battling a niggle. With so much uncertainty around fitness, Sri Lanka have found it difficult to field a consistent side.

“In the last one-and-a-half years, injuries have been a major concern for us,” Chandimal said. “Once the players get injured you can’t get the right combination. We have concerns, but I’m sure the boys will come back strongly with their fitness and their injuries.”

Sri Lanka have no choice, however, but to make the best of a less-than-ideal situation. With a weakened side, they must now either defeat a rampant Bangladesh, or lose very, very narrowly (provided the match is high-scoring enough) in order to make the final.

“In this kind of tournament if you lose the first two games, it’s always tough,” Chandimal said. “But sometimes it gives you more confidence and morale to come back strong. As a team, we’re looking at it that way. We will have something up our sleeves.”