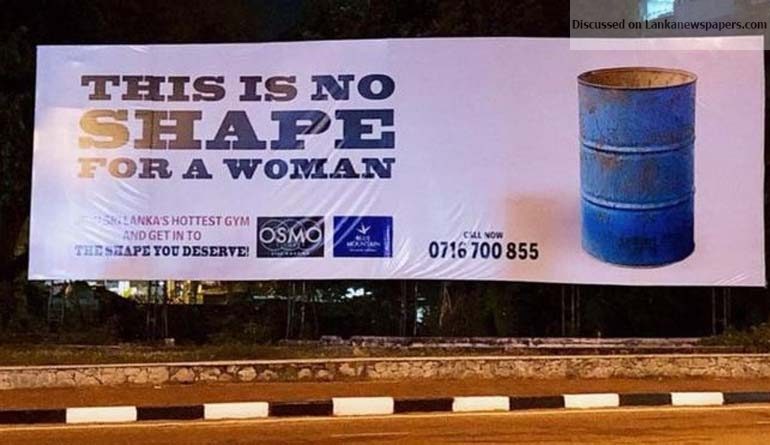 A gym in the Sri Lankan capital Colombo caused outrage after it put up a billboard featuring a picture of a barrel with the text “this is no shape for a woman”. The BBC’s Ayeshea Perera reports on the fight to get it taken down.

The hoarding for Osmo gym went up in a Colombo suburb last week and the row almost instantly made it on to social media.

Both men and women shared pictures of the billboard along with expressions of outrage and disgust at the “blatant sexism” and “body shaming” depicted.

Some began a hashtag campaign entitled #BoycottOsmo, while others tagged the organisation on Facebook asking them to take down the hoardings and apologise. However the gym did not respond, and a post featuring the images used in the billboard stayed pinned to the top of their Facebook page.

“The ad was nothing very different from the typical objectification and sexist usage of women by the ad industry, which has been selling anything from cars to perfume by sexualising women and their bodies,” Marisa de Silva, an activist, told the BBC.

“But this ad also attempted to body shame by dictating to women the ideal shape they should resemble, almost as though it is the sole basis of their worth.”

So, along with a group of women who had been discussing the billboard on social media, she decided to do something about it.

One of them, who did not want to be identified, tried calling Osmo’s marketing manager to complain, and was told that the hoarding had used an image that had not been “approved” by the company. He did not offer to take it down.

A few others decided to approach Harsha de Silva, the minister in charge of the Kotte constituency where the billboard was put up.

He responded with the tweet: “I asked the Colombo MC Commissioner to remove this unapproved offensive hoarding. I would not tolerate this in Kotte.“

So the billboard was covered up on the basis that it did not have the necessary permissions, and the Colombo Municipal Council allowed the women to use the space to display a message against sexism for two days. 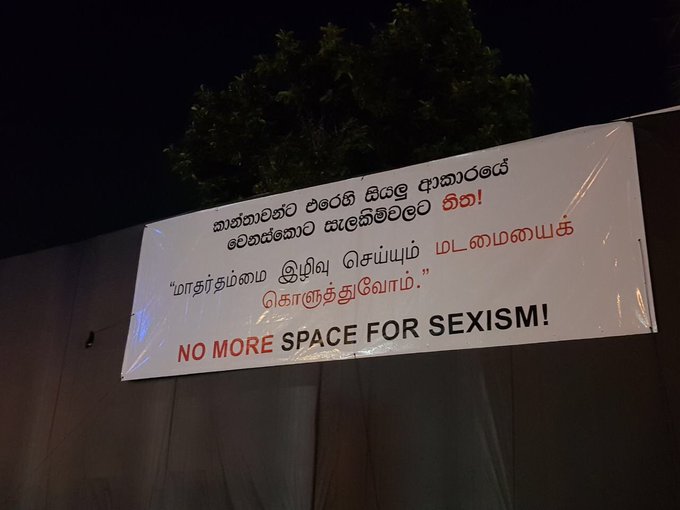 Ms de Silva, who was one of the women who spoke to the minister, canvassed opinion on social media for the text of the new banner, before settling on “no more space for sexism” in Sri Lanka’s three major languages – Sinhala, Tamil and English.

A local graphics company stepped in with an offer of sponsorship and the banner went up a day later.

But while many cheered the initiative to take down the billboard and replace it with a banner against sexism, a few men on social media warned that such a move set a “dangerous precedent” against free speech.

The banner did not last long either. It was taken down after a day, and its whereabouts are currently unknown.

Meanwhile Osmo also responded with an official statement on the campaign, saying that it had “withdrawn” the advertisement, which was not intended to “degrade, offend, insult or undermine any one person or women in general”.

It further explained that the ad had been inspired by a “disturbing” WHO report that said there were higher rates of diabetes, being overweight, obesity and physical inactivity among Sri Lankan women than men.

However Ms de Silva says she hopes that some lessons have been learned from the incident.

“This set off a chain reaction which I hope might make the ad industry at least think twice before subscribing to sexist advertising in the future,” she said.