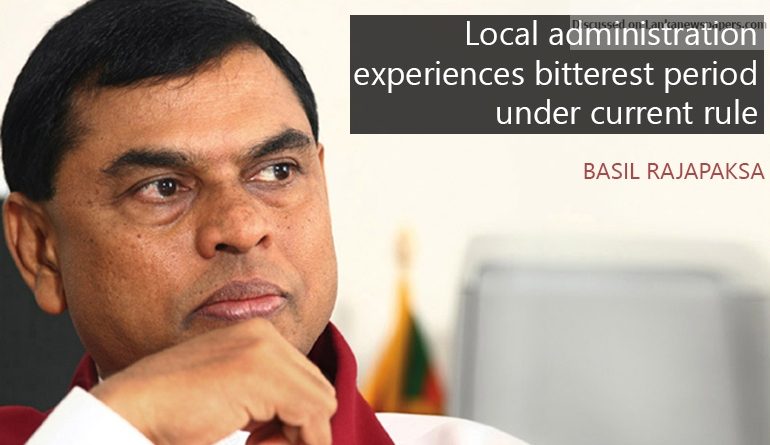 QHow do you see the progress of campaigning?
In general, voters are likely to be divided as pro-government and anti-government. There are people opposed to the government in its entirety. There are some who only oppose certain actions of the government. Next voters will be divided according to their affiliations with political parties such as the UNP- SLFP, SLPP and so forth.
According to opinion polls, only 30 per cent of people stand for the government. What is the government? That is the UNP-SLFP combination. Apart from that, we have the JVP and TNA that cooperated with the government at times while being in the opposition.
The joint opposition was the only force oppositional to the government in the real sense. Now, the JVP is also trying to join the anti-government bandwagon. Even President Maithripala Sirisena and his SLFP try to be seen as an anti-government force. All are attempting to ride on the anti-government wave of public opinion prevailing at the moment. It seems to be something hereditary with the President. He served in our government for such a long time in different posts. He was the longest serving General Secretary of the party. However, he now disassociates himself from all done during that period. That is double-acting in politics.
SLPP is the only anti-government force. The SLFP-UNP political division disappeared with the elections on January  8, 2015. Instead of the UNP, a candidate was fielded under the swan symbol against Mr. Rajapaksa. So, it was a contest between Mr. Rajapaksa and the UNP-led force. The SLFP was formed as an alternative to the UNP by late Prime Minister S.W.R.D. Bandaranaike. Today, voters are either for Mr. Rajapaksa-led political force or against it. That is the divide line. Some people who were with us could not get nomination from us. Some of them joined hands with the SLFP. It appears to have created a split of the vote base at village level in certain instances. 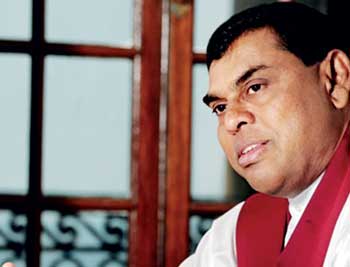 QThe President is seeking a mandate to root out corruption. What is your view?
There is nothing he did to eliminate corruption. The President contested the election as the common, apolitical candidate. He promised to bring about good governance. Yet, as his first task, he appointed someone who did not have parliamentary majority as the Prime Minister. He removed the Chief Justice thus deviating from the procedure. He brought back as the Chief Justice the lady who was once impeached by Parliament along with his vote. He never kept the promise that the Cabinet would be reduced to 25. He victimized Bhikkhus, politicians, government servants and war heroes. Corruption became rampant. The cost of road projects increased exorbitantly.
QHowever, the President appointed a commission on the bond scam and exposed it to the country. What do you say about it?
It is not the President but the joint opposition that exposed it initially. It was done with the cooperation of the media and people. I have a feeling that the commission was appointed to sweep everything under the carpet. That is the original intention. Once fraud was uncovered, the government should have begun police investigations. Afterwards, action could have been taken to prosecute the wrongdoers through the Attorney General. Normally, a commission is appointed to probe cases that cannot be dealt with under the usual legal procedure. This is not something difficult to be investigated. This is a daylight robbery.
QBut, the commission was able to gather substantial evidence in its process?
In a court of law, all such evidence has to be examined once again. Everything has to be started afresh.
QThe President said he started the second operation on the bond scam. What are your thoughts?
I do not know whether it is appropriate for a leader to summon the Attorney General and give him instructions. Earlier, we were accused of keeping the Attorney General’s Department under the purview of the then President. What is happening now?
I do not think it is morally acceptable to summon the Attorney General and instruct him on judicial matters. We have to assume that all cases filed by the Attorney General have been done at the instigation of the President. How does it conform to ‘Yahapalana’ policies?
It is wrong for any leader to summon the Attorney General. The Prime Minister also did it once and said it openly. The President is also the head of a certain political party.
QHow do you compete with the UNP at this election?
Initially, we thought the UNP would be our main challenger. I now feel that even diehard followers of the UNP will not cast their ballots this time. The present UNP leadership did the gravest harm to the party. We have differences with the UNP in terms of its economic policy and the policy on national issues. Be that as it may, right from its inception under late Prime Minister D.S. Senanayake, UNPers maintained self-respect which has been totally compromised under the present leadership. The UNP secured political clout this time in a conspiring exercise. Yet, power gained through conspiracy could not be exercised for the benefit of the party. Today, there is no challenger for us.
QYet, the UNP has support of the government. They can use it for their advantage. What is your view?
These local bodies will be constituted for a period of four years. They will remain under the current rule only for one year out of their four-year term. The Presidential election will be conducted next year. We are certain that power will be shifted to us. Then, these local bodies will be operated by our government. The elections to Provincial Councils are also due this year.
The local authorities remained dissolved for three years under the present government. They were run by special commissioners. There were severe concerns over garbage disposal, street lighting and Dengue prevention. The local authorities were unable to discharge their duties under the new government. It is the worst ever period in the history of local administration in our country. People did not receive any service from their local authorities after this government came to power.

These local bodies will be constituted for a period of four years. They will remain under the current rule only for one year out of their four-year term. The Presidential election will be conducted next year. We are certain that power will be shifted to us

QSeveral members who failed to get nomination from your party are contesting under different symbols. How will it affect your vote base?
We cannot say it now. There are 5,092 members to be elected in respect of electoral wards. We will be affected by this in 200 wards. Today, the image of former President Mahinda Rajapaksa is used for campaigning by three parties. He is the most popular politician. We have every right to use his picture. We are the rightful owners of his vision. The Sri Lanka Freedom Party (SLFP) uses his image as the party’s patron. There are independent groups using it. All these three political camps owe much to Mr. Rajapaksa. Finally, all should get together to defeat the UNP.
QAre you planning of contesting the next Presidential election?
First, we focus on this election. Afterwards, there will be elections to the Provincial Councils. We will prepare for the Presidential election. It will happen.
QHave you identified the candidate?
Not yet. It has to be decided by the party.
QMP Roshan Ranasinghe said it would be former Defence Secretary Gotabaya Rajapaksa. How true is it?
That is a question to be directed at him. We as a party have not decided on it. It may or may not be the former Defence Secretary. Last time, we heard about the common candidate at the eleventh hour.
QWill you be adopting the same modus operandi?
We will decide on it democratically.
QThe President’s term is now limited to five years. What is your view?
You see how the country was driven down the path of absolute disaster during the past three years. If the government remains for another three years, you can guess the predicament. Trimming down the term is good for the country.