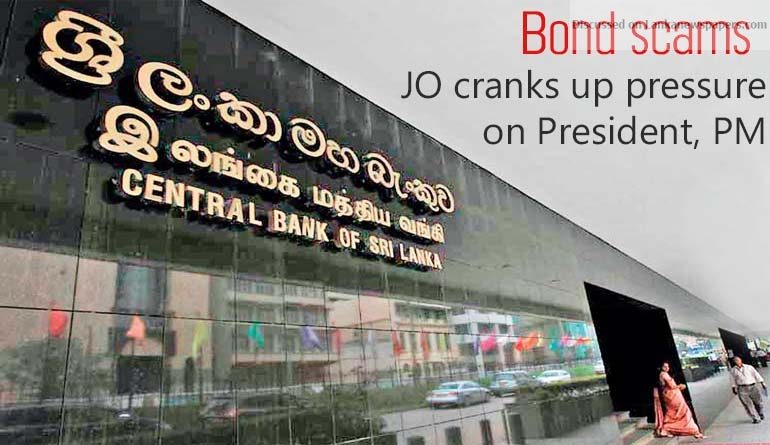 Former External Affairs Minister Prof. Peiris stressed that no other ‘crime’ could be compared with that of the treasury bond scams allegedly perpetrated by the UNP in Feb 2015 and March 2016. Prof. Peiris alleged that both Wickremesinghe and President Maithripala Sirisena were responsible for the second far bigger fraud committed in March 2016.

SLPP Chairman who is also a leading spokesperson for the Joint Opposition said so when The Island asked him whether their demand was fair when the previous Rajapaksa administration ignored calls for the then Prime Minister D.M. Jayaratne’s resignation over his Office intervening in Aug 2013 on behalf of a major heroin dealer.

The role played by the PM’s Office came to light after the Customs detected over 250 kgs of heroin brought in a container from Pakistan.

When The Island pointed out that had proper action taken in respect of the then Prime Minister, it would have certainly helped the JO/SLPP campaign against Wickremesinghe, Prof. Peiris acknowledged that there had been failures and the previous administration defeated at national level polls. But having campaigned on a platform of good governance and accountability, the Sirisena-Wickremesinghe coalition had plundered the Central Bank, Prof. Peiris said.

The SLPP refrained from responding to The Island allegation that the previous government, too, should take the responsibility for national economic crisis by blocking the National Audit Bill for over a decade. The Sirisena-Wickremesinghe government is yet to present it in parliament though it was to have been passed at the onset of President Sirisena’s 100-day government programme.

Asked whether extremely bad press about treasury bond scams as well as handing over of the Hambantota port on a 99-year lease to China, Kataragama shooting incident and Uva Chief Minister Chamara Sampath Dassanayake forcing school principal to kneel before him had helped the JO/SLPP LG polls campaign, Prof. Peiris said they didn’t depend on them to win forthcoming polls. The former reputed law professor said the yahapalana leaders had done absolutely nothing since January 2015 change of government. There was nothing but rhetoric, he said. There had never been a government like the present one, Prof. Peiris said, calling Maithripala Sirisena a lame duck President, pathetically struggling to cope up with his ‘arrangement’ with the UNP.

Referring to President Sirisena’s recent speech at Kegalle, Prof. Peiris pointed out that the SLFP leader hadn’t mince his words when he admitted that the UNP had ruined the national economy during the past three years therefore he was compelled to intervene.

Alleging that Wickremesinghe and the UNP had been engaged in desperate propaganda project to save the party from treasury bond scam fallout, Prof. Peiris challenged the UNP leader Wickremesinghe to reveal how he intended to deal with former Finance Minister Ravi Karunanayake named by the presidential commission of inquiry.

Prof. Peiris challenged UNP General Secretary Kabir Hashim’s claim that the bond commission report in no way had found fault with Wickremesinghe and the Premier cleared.

The former Rhodes scholar said the UNP feared to take disciplinary action against Karunanayake as he could cause irreparable damage. It would be interesting to know whether Karunanayake, currently assistant leader of the party would receive UNP nomination at the next parliamentary polls, he said.

Prof. Peiris said that Wickremesinghe would have to consult the decision making UNP Working Committee regarding Karunanayake.

Wickremesinghe certainly owed an explanation to the country as regards contradictory statements issued in respect of the first bond scam. Having cleared Arjuna Mahendran and the PTL on March 17, 2017, Premier last week acknowledged that PLT funds amounting to Rs 12 bn had been frozen and the government was now in a position to recover losses estimated at over 9 bn.

The SLPP Chief said those who had been let down by yahapalana partners could use Feb 10 LG polls to deliver a heavy blow. Yahapalana government, in fact, had turned the poll to a referendum on the three year administration, Prof. Peiris said, declaring Mahinda Rajapaksa as the leader of the lotus bud front.

Prof. Peiris declared that they lacked faith in Attorney General Jayantha Jayasuriya. Commenting on the circumstances, one-time acting AG Suhada Gamlath had been sidelined, Prof. Peiris accused the AG of acting against the interests of the people.