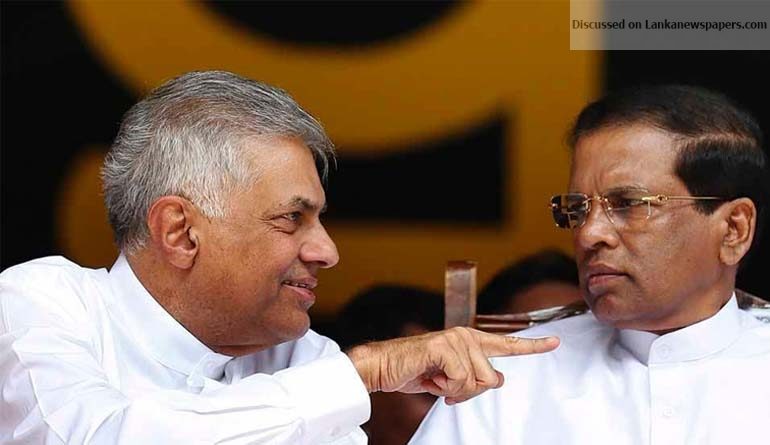 President Maithripala Sirisena’s application to the Supreme Court to obtain its opinion on the length of his term came as a surprise to the general public, and evidently to most in the government. The bid for an extended term was generally viewed as a violation of his commitments, due to the 19th Amendment, which reduced the presidential term from six to five years, being passed with his approval. However, the presidency is the main source of the SLFP’s power within the government. Therefore preserving the presidency is a political necessity to the SLFP and needs to be seen as such. The Supreme Court opinion that the president’s term will be five years against six years was a blow to the President and to the SLFP. It has highlighted the fact that the president can only give his strength to the SLFP membership for less than two years as presidential elections will now fall due in 2019.

A Supreme Court opinion that the President had a six-year term rather than a five year term would have given a bigger incentive to voters to vote for the SLFP rather than for another party. A six-year term for Maithripala Sirisena would have meant that SLFP MPs would face elections before him. This would make his support for individual MPs critical, including for the process of securing nominations from within the party. A six-year term would also place the UNP at a disadvantage, competing against an SLFP that enjoyed the support of a sitting president. The President’s adherence to constitutional norms in soliciting the Supreme Court advisory opinion, and accepting it without protest, is a positive signal to the country at large about the prevalence of the Rule of Law under the present government.

However, the downside of these political maneuverings is that power politics is at the centre stage. This is not what the majority of people hoped for when they voted for a change at the presidential and general elections of 2015. President Sirisena, Prime Minister Wickremesinghe and other government leaders all pledged to ensure good governance and non-corruption as their primary goals, which would facilitate both economic development and national reconciliation. However, the evidence from the Bond Commission report is that within a few weeks of coming to power, some of the government leaders were involved in the bond scam which was not an expression of the anticipated new political culture. Likewise President Sirisena looking to extend his term of office was not an expression of the promised new political culture, but a reflection of power politics.

One of the unintended outcomes of the open tension between President Maitripala Sirisena and members of the UNP is to divert public attention away from the opposition and to internal conflict within the government in the run up to the local government elections. The submission of the report of the presidential commission appointed to investigate the Central Bank bond scam has given the President an opportunity to strengthen his hand. It has also given rise to the perception within the UNP that their members are being targeted by the President and the SLFP. This was followed by President Sirisena asking the Supreme Court for an advisory opinion on whether his term of office was five years or six. The tussle between the UNP and SLFP members on these issues has taken the centre stage of public interest, thereby reducing the publicity for the SLPP which is out of the main frame.

In keeping with the adage that to politicians, bad publicity is better than no publicity, the UNP-SLFP tussle on this issue has enabled the SLFP to demonstrate to the general public that it is a power to reckon with in the government. In the aftermath of the Supreme Court opinion, leading members of the SLFP are claiming that President Sirisena will contest presidential elections a second time. This is in order to impress the voters that the president will continue to remain in power for the foreseeable future. The suggestion is made that therefore voting for the SLFP at the local government elections will ensure access to governmental patronage for the foreseeable future. In addition, the president has stated that after the elections he will take control over the economy through the device of the National Economic Commission.

So far the Prime Minister has been making an appearance of going along with the President. The UNP did not challenge his decision to seek the opinion of the Supreme Court on the length of his term of office. It is reported that this inquiry of the President was made without the knowledge of the UNP or the Prime Minister. The UNP probably sees the President’s statement that he will take control of the economy after the elections as part of his election campaign to persuade the SLFP’s traditional voters to vote SLFP rather than for the SLPP. In response to the President taking offence at the various statements made against him on public platforms by members of the UNP, the Prime Minister is reported to have admonished his party members to desist from public criticism of the President.

In this complex context the positive feature is that Sri Lanka continues to have a government of national unity comprising the two largest political parties, the UNP and SLFP. As can be expected the forthcoming local government elections have aggravated the tensions between them. It is customary that those who seek to win an election engage in boosting their own images and running down their rivals. At the same time it is necessary to value the check and balance function that having two parties in power brings to the government in tackling national issues. The exposure of the Central Bank bond scam is a relevant example. If it has been left to one party in governance, then neither the scam nor its magnitude would have seen the light of day.

It is also necessary for the two parties to work together to bring resolution to the country’s protracted ethnic conflict rather than to continue to drift without engaging in serious problem solving of difficult and controversial issues. The political stresses of the present must not stand in the way of future cooperation. Previous efforts to find a solution floundered on the rocks of narrow political partisanship. The resumption of both the constitutional reform and transitional justice processes after the conclusion of the local government elections will be a bipartisan national task.

The forthcoming election will give an indication of the level of support for the ruling parties on the one hand and for the opposition on the other hand. It will be important for the parties in the government coalition to obtain majority popular support in order to have the confidence to forge ahead with the plans they have already laid out for national level problem solving. A situation where the local government election yields an outcome in which the UNP and SLFP have to cooperate in order to secure the majority in each of the local government authorities would take the policy of bipartisanship down to the community level, which will be the best formula for building grassroots support for national problem solving on controversial issues.