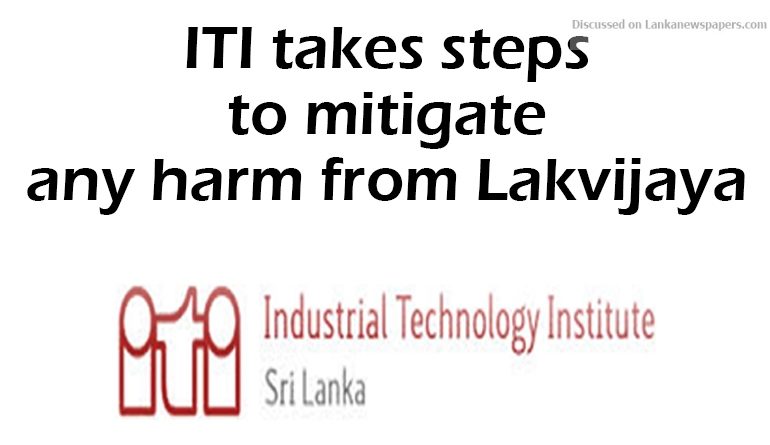 The Ceylon Electricity Board commissioned the ITI to do the tests in 14 locations for a period of one year, said Indrasiri Gallage, Lakvijaya Plant Manager. He also said medical tests have been introduced for employees and that more water is being sprayed to mitigate the effects of fly ash and coal dust on workers.

Meanwhile, a letter signed by 71 employees of the power plant complaining that the health of operation and maintenance staff was seriously compromised by dust and ash was leaked this week. Dated June 2017, the petition pointed out that around 14 to 16 percent of total combustion is retained as ash. The daily fly ash production was over 1000mt and bottom ash close to 100mt when all three units of the plant were running at full load.

While the ‘qualified fly ash’ was sold to cement manufacturers, the excess was dumped in the ash yard using open trucks. “Spreading of fly ash during the unloading from silo to the truck and during the transportation is unavoidable due to the inadequate mixing of fly ash with water at the silo ash feeders,” the letter states. “The situation is aggravated by the number of truckloads dumped every day.”

There was a significant increase in the airborne ash particles around the silos. This is then carried towards the main power block with the wind. Conditions were much worse during the monsoon from April to October when dust was carried away from the silos and the yard towards adjacent villages.

The employees who work in close proximity to the main plant and yards are exposed to the dust throughout the year due to extensive, round-the-clock dumping.

“Though the employees have been provided with dust masks, we have come to understand that only a fraction of the dust particles are filtered by these masks due to the nature of the particulate matter,” the letter states. “It was revealed during the medical test performed recently at plant premises that most of the employees are having lung-related issues and were referred for further treatments/medications.”

The signatories also refer to arsenic and selenium content in fly ash. They express concern about radiation – something which has not been measured at Lakvijaya in recent times. “Fly ash is only part of the problem,” they say. “Coal dust is spread all over the plant due to wind and lack of proper dust suppression mechanisms in the coal yard and conveyor belts/chutes.”

These were serious issues and needed to be addressed as a top priority, they urge. “Most importantly, it is unethical to maintain the plant working conditions at such a damaging level for the lives of both our subordinates and the nearby villagers,” they stress.

They ask for responsible parties to measure the radiation level within the plant premises and make the results available to all employees. They also call for mandatory transfers to be introduced for those who work for a stipulated period at the plant.

The environmental protection licence (EPL) issued to Lakvijaya by the Wayamba Provincial Council Environmental Authority is yet to be renewed. It lapsed in May last year. The Public Utilities Commission of Sri Lanka is working with the authorities, including the CEB and Provincial Council, to devise an action plan to cut down pollution. Independent experts are assisting.

Efforts are ongoing to restructure the EPL to make it more stringent with additional requirements and monitoring. It is likely to be restored in a few weeks but will contain specific conditions.