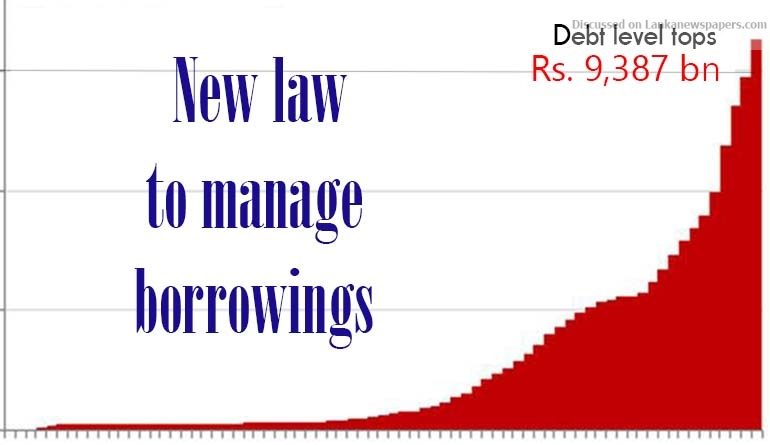 With the Government debt level in excess of Rs. 9,387 billion, a new Active Liability Management Law is to be enacted to make provision to raise loans, in and outside Sri Lanka, to manage public debt.

The objective is also to ensure that the financing needs and payment obligations of the Government are met at the lowest possible cost over the medium to long term, consistent with a prudent degree of risk. Prime Minister Ranil Wickremesinghe, who is also the Minister of National Policies and Economic Affairs, in a Cabinet memorandum said the debt sustainability had become a national concern as it was 76 percent of the Government revenue for 2016.

Although, the Government has not defaulted in the repayment of debt any time before, it has to adopt appropriate debt reform methods to prevent any potential future risk, he said. The new law will allow Parliament, by resolution, to give approval to raise money during a particular financial year. But the amount should not exceed ten percent of the total outstanding debt as at the end of the preceding financial year. This loan will be raised in terms of the relevant laws including the provisions of the Monetary Law Act, the Local Treasury Bills Ordinance, the Registered Stocks and Securities Ordinance and the Foreign Loans Act, for the purposes of refinancing and pre-financing of public debts of the Government. The Bill will be presented to Parliament shortly.

Meanwhile, the Government has been asked to pay Rs. 14 billion as insurance premium to a Japanese bank to qualify for a loan to build the Pothuhera-Galagedera stretch of the proposed Central Expressway. (See story on Page 13). The amount has been assessed after Sri Lanka’s loan repayment capacity was taken into consideration, officials told the Sunday Times.