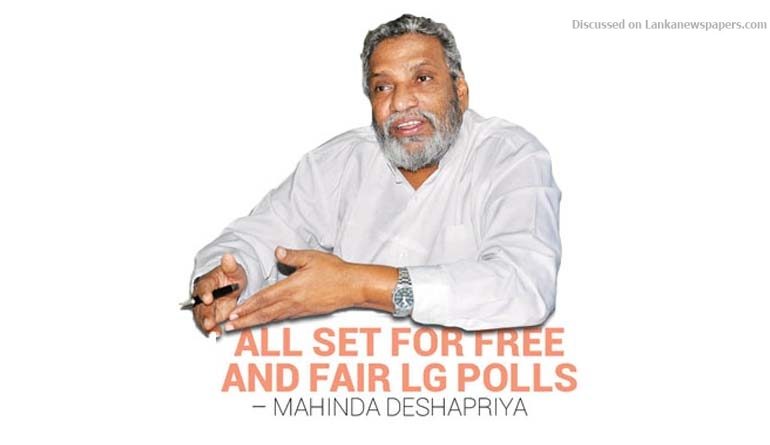 “The era of vote rigging is long past and we have made all arrangements to have a very peaceful election,” he told Ceylon Today in a special pre-election interview, at his Rajagiriya Head Office, late Friday night.

Responding to a question from Ceylon Today, as to whether he maintains the same stance as he did during the previous Presidential and Parliamentary polls, where he told the Police to shoot polls violators in their heads and not the legs, for which he was respected by the public for his home-spun cliché (Oluwatama Thiyanda!), he said that he was most constrained to hold those polls during the most turbulent times in independent Sri Lanka’s contemporary political history.

Here, in a frank, forthright and no holds barred interview, he spells out his thoughts on the gamut of issues, including the Constitutional Provisions that he is empowered with, to hold free and fair elections.

Excerpts of the Interview:

Also Article 104 B (1) of the Constitution says (inter-alia) “The Commission shall exercise, perform and discharge all such powers, duties and functions conferred or imposed on or assigned to – (a) the Commission; or (b) the Commissioner-General of Elections, by the Constitution, and by the law, for the time being, relating to the election of the President, the election of Members of Parliament, the election of members of Provincial Councils, the election of members of Local Authorities and the conduct of Referenda, including but not limited to all the powers, duties and functions relating to the preparation and revision of registers of electors for the purposes of such elections and Referenda and the conduct of such elections and Referenda.”

What are the specific measures that you can take and that you have already taken to ensure a free and fair election?

A: We have taken a large number of steps in that direction. We have now, in full force, a Committee of Permanent Representatives to probe and monitor polls related violence. That Committee has nominees of political parties, a Deputy Inspector General of Police, who is stationed at the Elections Secretariat (Ravi Peiris) and his team of 20 Officers, and an Additional Secretary (Legal). Very often, the IGP and another Senior DIG also come for those meetings. We have also an anti-elections violence patrols in the outstations and there are ten teams which have been operating from our Colombo Head Office as well.

However, on the other hand, we have also not limited the development activities of the Government. But, we have certainly put a full stop to politicians having tamashas out of the development projects of the Government and their seeking political mileage out of those. For instance, both the President and the Prime Minister recently ceremonially opened the Rajagiriya Flyover but they did not seek any political mileage out of that. We also put a stop to MPs spending their Decentralized Budgets to give gifts to voters and placing their names on the gifts. There also have been various candidates who have used devious programmes to promote their candidature organizing and hosting Bodhi Poojas and requesting candidates to cast their votes in their favour. Other means have been that there have even been school principals who have got candidates to address Parent Teacher Association meetings to ask for their votes. That is also illegal. We have put a stop to all that! There have also been some appointments made to the State medical sector and others which have been after the nominations have been called for. But, we have only approved those who have been called for by the Public Service Commission and other statutory bodies, such as the Salaries and Cadres Commission, the Management Services and the Treasury. But, we have also got complaints that the final lists, in some instances, have not been the ones which have been selected originally. Others are illegal. We have got the general audit team and the internal audit team to probe all that.

This will be an election with a remarkable difference with a far lesser number of posters and cutouts.

How can you say that? The road that leads to my house, also has posters pasted on the parapet walls?

This is the first election conducted under the Good Governance or Yahapalana dispensation. What has been the difference compared to the previous elections?

A: No comment, You can say that I refused to comment. That is because, if I comment, that would be tantamount to promoting one political party and doing a disfavour/discredit to the other. We, at the Elections Commission, are treating all the political parties alike and we cannot give an answer promoting or demoting anyone.

Does the fact that the Government comprises the two biggest parties in the country, in a coalition, help you with the task of conducting a clean election?

A: That is strictly not so. We got the cooperation of both, President Maithripala Sirisena and Prime Minister Ranil Wickremesinghe, this time and former President Mahinda Rajapaksa last time.

Do you believe that there will be less abuse of State media during this campaign?

A: Yes. We hope so. But there is a hold on the State media. But, we have no control of the private or independent media at all. But, the proverbial teacher punishing the students with the cane and spiting them, is long over. Like the teacher discussing and explaining to the students, we could also consult the ‘students’, the private media in this instance. We expect the independent media also to cooperate with us as they are also our stakeholders in these elections.

This is also the first test of the so-called ‘Hybrid‘ or Mixed Member Proportional Representation system of elections in Sri Lanka. Do you believe the voters and even the candidates understand the process well?

A: To begin with, I don’t believe in this so called word ‘Hybrid’. As for educating the voter, we have tried our best through the electronic media, but the voter thinks that he does not need to be educated as he thinks that he knows it all.

The idea was to improve chances of locally well-known and talented people to emerge as leaders. Do you think that will happen?

A: That is our hope and we are hoping and praying that it will happen that way!

But, there are also the political undesirables who have been given nominations. Your comments.

A: That is much beyond our controls. Let the Police and the Judiciary decide on that.

In previous elections, we have observed gross violation of election laws and vote riggings. What are the concrete measures that the Election Commission and you have taken to prevent such possible violations?

A: There has been little or no rigging at any of the recent elections, unlike way before! Those are things of the past.

What is your message to the voters?

A: My message to all voters is that they must go and vote and exercise their franchise, which is their constitutional right. That is true.

The ballot papers issued to the voters at the polling station are printed with only the names and symbols of the contesting the Parties with the words “Independent Group” and the identification number and their symbols in the case of the independent group.

The names of the candidates or their numbers do not appear on the ballot paper.

The voters are requested to mark only one cross in the space to the right of the name and the symbol of the Party or number and symbol of the Independent Group the voters wish to cast their votes for.

It is also imperative that the voters refrain from entering, drawing or writing any mark other than the cross (X) on the ballot paper since the writing of any other mark may be regarded as an attempt to reveal the identity of the voter.

The voters, therefore, are kindly requested to put only one cross (X) in the space provided to the right of the symbol of the Party/Independent Group that they wish to cast for.