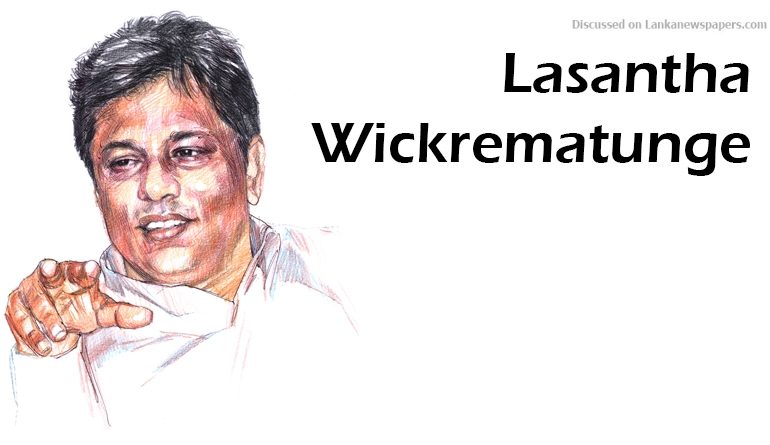 The Army Intelligence Officer who had committed suicide by hanging himself in 2016, having written a letter taking responsibility for the killing of senior journalist and Sunday Leader Chief Editor Lasantha Wickrematunge, had in fact spent that day in the Kegalle area, the CID informed the Mount Lavinia Magistrate yesterday.

This revelation is based on the officer’s telephone records, unearthed by the CID.

The army intelligence officer, who was a resident of Kegalle had written this letter claiming responsibility for the killing of Lasantha Wickrematunge and hung himself thereafter.

However, the CID notified court that while the handwriting on the letter belongs to the said intelligence officer, the details in the letter are contradictory to the details of his phone records.

The information gathered by CID investigators were presented to the Magistrate revealing that the suspects who were arrested on suspicion of having carried out the assassination of Lasantha Wickramatunge, had in fact been loitering near his home.

The case was taken up before the Mount Lavinia Magistrate, Mohammed Sahabdeen.

Further revealing the information uncovered through the investigations before court, the CID said the two youth identified as the owners of the motorcycle on which they had allegedly come to assassinate Lasantha, were found to be residents of Vavuniya.While Wickrematunge was assassinated on January 8, 2009, these two youths had been killed and their bodies had been burnt a few days prior to his assassination on January 1, 2009 by an unknown party and their charred bodies were found in the Anuradhapura area.

The Criminal Investigation Department informed court that the investigation into the murder of Wickrematunge began in March 2015 and officials have recorded statements from 950 persons regarding the incident.

It was also disclosed that 295 out of 950 such individuals are army intelligence officials.

The Department also informed court that the fingerprints found in the car of Lasantha Wickrematunge at the site where he was murdered did not tally with the fingerprints of intelligence officials of several army camps including the Tripoli Army Camp.

The Court was also informed that investigations into the vehicles that were following the Lasantha Wickramatunga’s car on that fateful day are continuing. The CID also informed court that they are investigating as to why 17 officials of Tripoli Army camp who were arrested in connection with this murder were released.

The CID also informed court that they handed over the CCTV footage of the route on which Wickrematunge’s car was plying from his wife’s residence to office on this day, to the Moratuwa University for further study.The university had informed investigators that they are unable ascertain facts with regard to the CCTV footage.

The CID told court that they would hand over the investigation into such CCTV footage to another institute.

It was also revealed in court that the mobile phone of Lasantha Wickrematunge has been imported to the country in 2008 and the relevant phone and the SIM card have been sold to him by one of the three dealers of the Softlogic company. The CID told court that they are yet to identify the dealer who sold the particular phone to Wickrematunge.The notebook and other items which were in possession of Wickrematunge at the time of murder had been named as court productions by Sub Inspector Weerasinghe of the Mount Lavinia police.

The CID had found that these items had gone missing and the relevant page in the Police Record Book containing the details of these items had been replaced with another page.

The Sergeant Major who was arrested and remanded in connection with this murder was produced in court yesterday. Senior Lawyer Athula S. Ranagala appeared for the aggrieved party. The case was put off for March 15. The Magistrate ordered the CID to produce the progress of the report on the investigations