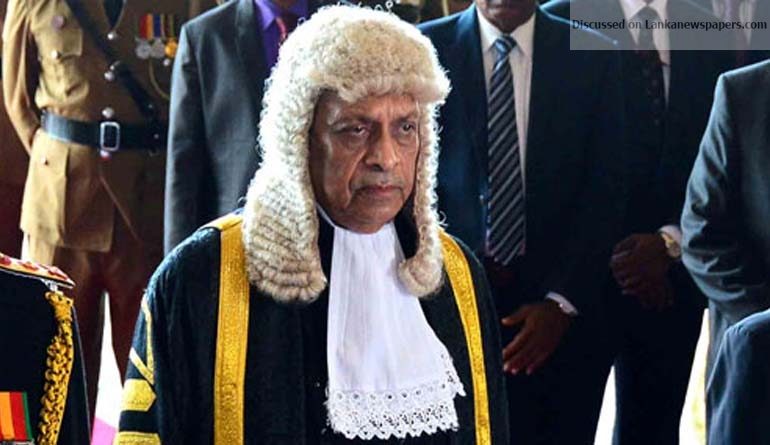 Speaker Karu Jayasuriya has intervened in a growing spat of angry outbursts among coalition partners – the Sri Lanka Freedom Party (SLFP) and the United National Party (UNP) – urging both President Maithripala Sirisena and Prime Minister Ranil Wickremesinghe to rein in both sides on the eve of the local council elections next month.

This climaxed at this week’s Cabinet meeting when President Sirisena made a 40-minute-long address to the ministers and then walked out of the meeting, only to be coaxed to return and preside over the rest of the meeting’s agenda.Both sides have now reached a truce not to criticise each other after their stormy relations reached ‘explosive’ levels at last Tuesday’s weekly ministerial meeting.

This ‘political ceasefire’ had been holding since Tuesday with no broadsides by the partners against each other — until yesterday’s public meeting at Kegalle where President Sirisena slammed the UNP for the mismanagment of the economy during the past three years (see inset).
Speaker Jayasuriya had noted that unity among the coalition partners of the National Unity Government was essential.

President Sirisena had earlier fired broadsides at the UNP after he received the report of the Commission of Inquiry that probed the Central Bank bond scam. This was to see some ‘reprisal attacks’ by UNPers. He was more pointed at the Cabinet meeting last Tuesday. The next day,(Wednesday) Premier and UNP leader Wickremesinghe summoned a joint meeting of his parliamentary group and the party’s Working Committee to urge that no one should criticise President Sirisena. He told one of the critics, S.M. Marikkar, that he would take him to meet the President. Another critic, Minister Harin Fernando, met President Sirisena separately to explain why he made those remarks against him.

In marked contrast, President Sirisena is yet to advise his ministers not to criticise the Premier, or the UNP. Some SLFP ministers and deputies like Susil Premajayantha and Dilan Perera have been vociferous critics.

However, one SLFP minister said the President had summoned a meeting of these ministers for later this month and he is to advise them on these lines. It all began after ministers assembled at the Presidential Secretariat, the former Parliament building, on Tuesday morning. Ahead of taking up items on the agenda, President Sirisena declared that he had an important statement to make and added that he was also going to tape record it. Surprised by the move, Cabinet Secretary Sumith Abeysinghe asked whether he should stay outside until that was over. However, he was told to stay behind.

During a 40-minute speech, thereafter, Sirisena spoke of the mandate he received during the January 8, 2015 presidential election to fight bribery and corruption. This was why he had appointed a Presidential Commission of Inquiry to probe a number of such cases. This was also why he appointed a Commission of Inquiry to probe the bond scam at the Central Bank of Sri Lanka (CBSL).

Now there were those criticising him, he said. He named a number of UNPers who were criticising him over such action. They included Telecommunications and Digital Infrastructure Minister Harin Fernando, International Trade State Minister Sujeeva Senasinghe, MPs S.M. Marikkar, Sydney Jayaratne and Nalin Bandara.

“Do they want me to fight corruption,” he asked. Thereafter, President Sirisena declared that he was unable to discern whether the criticism levelled against him was voluntary – or engineered. He then turned to Premier Wickremesinghe, who was silently listening, and disclosed, “when you asked me, I told you not to appoint Arjuna Mahendran as Governor of the Central Bank. You went ahead and appointed him.” Similarly, he said, “I told you not to appoint Ravi Karunanayake as the Finance Minister. I told you to take it under your control. You did not listen to me.”

In what seemed a summing up, President Sirisena declared; “tell me whether to lead the Government or not. I will leave tomorrow if I am not wanted.” Emotion appears to have overwhelmed him at this stage. With tear shot eyes he remarked; “I am in no mood to continue this Cabinet meeting,” and walked out.

Excited cabinet ministers huddled into discussion and urged Premier Wickremesinghe to bring President Sirisena back. So the Premier and a group of ministers had to go up to the third floor office of the President. The Prime Minister calmly persuaded the President to return and resume the Cabinet meeting.

One item after another on the agenda was then taken up for discussion. When it came to the subject of “Any other business,” President Sirisena raised issue over Finance Minister Mangala Samaraweera’s Gazette notification to extend sales hours at liquor sale outlets and allow women to work there. He also restored the ban on the sale of liquor to women which the Finance Minister had lifted.

“The move (by the Finance Minister) is not in line with our culture and traditions,” President Sirisena said. He noted that on the one hand he was spearheading a national policy to reduce the consumption of liquor. On the other, he declared, sales hours were being extended. There was a contradiction in the two positions, he said. Some ministers, mostly from the SLFP endorsed President Sirisena’s remarks.

Minister Samaraweera, thereafter, said he would withdraw the notifications in accordance with the president’s wishes. Of course, the rationale behind his move has been to reduce the consumption of illicit liquor by extending hours of sale of registered outlets. As for women workers, he had kept to the principle of gender equality which is enshrined in the Constitution – a matter now before the Supreme Court.

Despite a ‘kiss and make up’ situation once more, the relations between the SLFP and the UNP, it is clear, cannot go back to the days when it was touted as the “rainbow coalition.” Why then is Premier Wickremesinghe conciliatory in his open conduct towards President Sirisena. The answer came from a well-informed UNP stalwart. He said “he wants to ensure that the current split within the SLFP, which was not reconciled, remains that way. The more it remains, the more the UNP is the beneficiary. He has his party’s eyes on the next presidential election.”

On the other hand, this week, President Sirisena trained his guns on his one-time cabinet colleague G.L. Peiris. He named him at a political rally and said it was an “outsider” like him who was running the rival faction. This week, Dr. Peiris has been linked with talks to ensconce former Defence Secretary Gotabaya Rajapaksa as the next Sri Lanka Podujana Party (SLPP) presidential candidate. He is known to have won the concurrence of leading members of the Rajapaksa family.

Mr. Gotabaya Rajapaksa had said he would only require “three months notice” so he could relinquish his United States citizenship to contest a presidential election, now due at the end of next year given the Supreme Court opinion delivered on the incumbent President’s period of office.

Thus, a future presidential election could become a three cornered fight among President Sirisena (SLFP), Prime Minister Wickremesinghe (UNP) and Gotabaya Rajapaksa (SLPP). UNPers believe this would weigh in favour of Premier Wickremesinghe who is publicly taking a conciliatory position at the moment.

However, holding the key to much of this is how the political events would play out post-February 10 local polls. That will be the first formal indicator of where the public support lies.