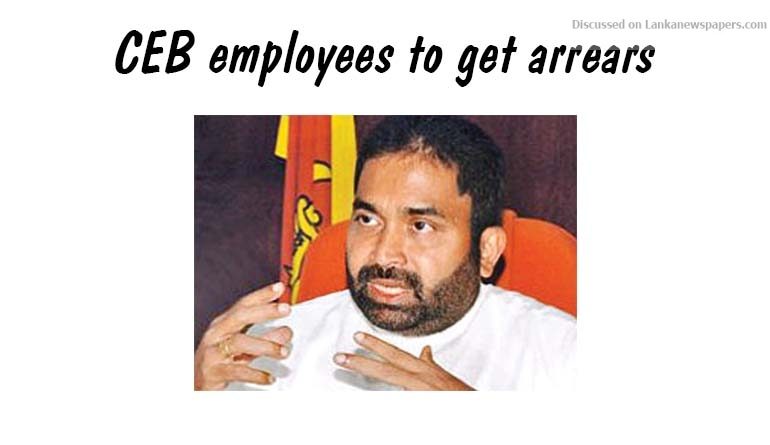 The government is to provide the best solution to the salary anomaly issue of the Ceylon Electricity Board employees and pay the arrears at the first possible instance,Power and Renewable Energy Minister Ranjith Siyambalapitiya said yesterday.

He made revealed this yesterday at the press conference held at the Ministry auditorium on the trade union action launched by the Ceylon Electricity Board employees in connection with their salary anomalies.

The Minister said that the government would act in accordance with the agreement , following the long studies by Cabinet and the observations of the Viriththamulla Committee. He added as the matter is in progress as agreed there was no point in resuming trade union action.

Minister Siyambalapitiya said that as the Labour Commissioner General, CEG General Secretary, Senior officials of the CEB and the representatives of the trade unions agreed on September 20, 2017 Labour Minister John Seneviratne and himself tendered a cabinet paper to appoint a sub committee in this connection. He added the sub committee tendered a Cabinet Paper which was approved duly. He also added that meanwhile the Labour Commissioner General appointed another one. “However this Committee is functioning and it has been given a three month period,” the Minister said. “We have asked the committee to submit the solution as soon as possible.”

Minister also pointed out that the agitators had been granted an allowance equal to their salary on two occasions in 2018 while a bonus of one and half months salary had been paid to them in December last year. He added they would be given a 25 percent salary increase as well.