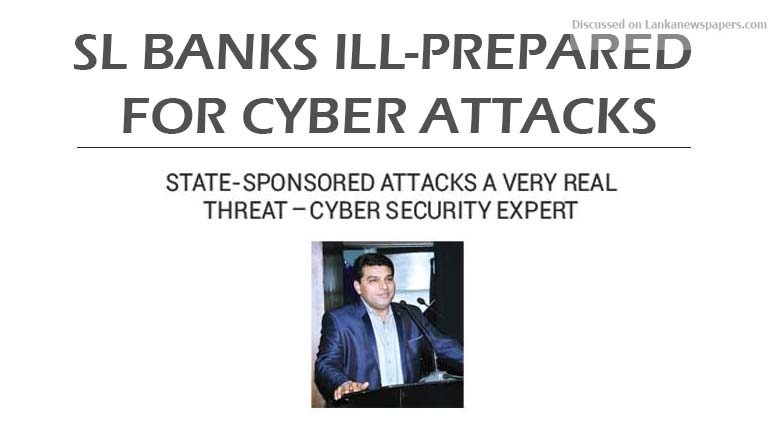 A leading multinational cyber security and anti-virus provider warned that the majority of Sri Lanka’s banks are unprepared to face severe cyber attacks, which, it stated, the region would have to face within the next year.
Delivering the keynote speech at the Kaspersky Corporate Awards Night 2018 recently, Kaspersky General Manager – South Asia, Shrenik Bhayani said that the SAARC region – particularly countries with smaller populations, including Sri Lanka – are increasingly vulnerable to State-sponsored cyber attacks, similar to the Bangladeshi Central Bank (CB) cyber attack.
He said that such a State-sponsored, large-scale attack could be expected within the next year, adding that only India is prepared to face such an attack.

Speaking to Ceylon FT, Bhayani stressed that Sri Lanka’s banking sector is severely vulnerable to a cyber attack, as most banks are unprepared for such an eventuality.

“We thank GIZ Sri Lanka for supporting our SME sector in this initiative with their huge funding. There are a little more than one million registered SMEs and MSMEs in Sri Lanka. Each provides employment to three people on average, especially in rural areas. We believe that SMEs are more than 70% of the total number of enterprises in the economy, providing 45% of the employment and contributing to 52% of the Gross Domestic Production (GDP). With the increasing trend of globalization, the SME sector has become a driving force for ‘growth and development’. As a result, the Government of Sri Lanka has assigned high priority to the development and strengthening of SME sector to be a sustainable sector of the country’s economy and to link to global markets,” said Minister Bathiudeen.

“To achieve this goal, the national SME Policy framework, its action plan and assigning responsibilities are important steps. You may be aware that the National Policy Framework for SME Development was launched by Prime Minister Ranil Wickremesinghe last year and the Implementation of Action Plan for the National Policy Framework was approved by the Cabinet of Ministers last year.
The SME Development Action Plan is expected to achieve the defined objectives in the SME policy framework. It is based on six policy intervention strategies articulated in the policy framework, and Enabling Environment is one main area to be addressed to improve the legislative regulatory and institutional framework.

This also involves proper coordination, simplification and rationalization of procedures for SME development. Accordingly, the Ministry of Industry and Commerce and the National Enterprise Development Authority (NEDA), with the generous support of GIZ, have worked hand in hand to select a qualified and suitable consultant and it has been awarded to M/s Earnest & Young Advisory Services to undertake the study on enabling environment, particularly the evaluation of legal environment and institutional framework.”

EY Advisory Services Partner Arjuna Herath said that EY is proud to partner in this national initiative. “EY is a global leader in assurance, tax, transactions and advisory services. Locally, we are committed to doing our part in building a better working world for our people, for our clients and for our communities. We believe there is a need to boost Sri Lankan SME sector in a qualitative way and this is a major step in this direction.”

The national SME policy was launched by Prime Minister Ranil Wickremesinghe exactly five months ago on 13 September at Makandura Industrial Zone of the Ministry of Industry and Commerce, the release concluded.