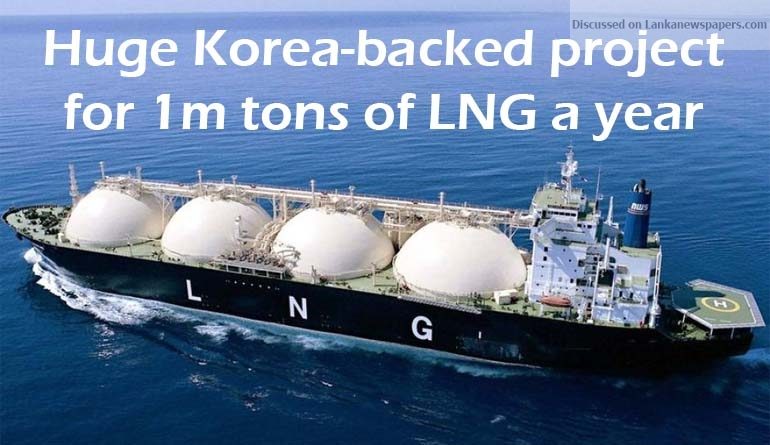 The Government will open for procurement under the Swiss Challenge method a South Korean proposal for a free-of-charge floating Liquefied Natural Gas (LNG) terminal tied to an annual order of 1mn metric tonnes of LNG for two decades at international market prices–the most expensive tender ever to be floated in Sri Lanka.

But industry and procurement experts insist that any tender for a terminal and for LNG, especially in such vast quantities, must be in keeping with the principles of open international competitive bidding to ensure Sri Lanka gets the best prices and widest participation of global players. They say Swiss Challenge is one of the least-used methods of procurement in the world, a fact well-documented on the internet.

“Credible international bidders are usually reluctant to respond to a Swiss Challenge because it comes on the back of an unsolicited proposal,” said Saliya Wickramasuriya, an independent consultant and former Director General of Petroleum Resources. “They don’t know if it has been informally solicited, and is simply being ‘laundered’ via a Swiss Challenge process.”

A Swiss Challenge usually grants an advantage to the original proposers and often gives them an opportunity to match whatever anybody else tenders. If the structure of the Swiss Challenge is bad, it carries little incentive for serious players to make the effort to compete.
“It is not a competitive process, although it may appear to be,” Mr Wickramasuriya said. “It is not a smart procurement method – typically only used to shift State assets in which few have expressed interest. It is hardly ever used to select partners for strategic projects.

The long-term gas supply to Sri Lanka is a quantifiable, strategic national project. if anything ever was. We don’t need to embark on selecting a partner for that on the basis of one unsolicited proposal.”

The Government should welcome the various unsolicited proposals and “then go to the market with a proper RFP, not a Swiss Challenge,” Mr Wickramasuriya said. “A far better way to handle the high level of interest Sri Lanka’s natural gas market has generated would be to compile a proper tender document, with specific timelines, prices and volumes, and offer it to the entire market place. This way we can compare apples-to-apples, as it were, and avoid the question mark on optimum value addition that Swiss-challenging one particular proposal will inevitably bring,” he said.

A Swiss Challenge is defined as “an offer made by the original proponent to the Government ensuring his process to be the best (in terms of cost and time effectiveness) by his initiative as a result of his own approach or on the demand of the Government to perform a certain task”.
The system allows third parties to make better offers (challenges) for a project during a designated period with a simple objective of discouraging frivolous projects or to avoid exaggerated project development costs in a transparent manner. The original proponent then gets the right to counter-match any superior offers given by the third party.

The bid from the Korean Government-backed SK E&S Company–an integrated gas and power company–was first submitted by President Maithripala Sirisena, according to a letter Power and Energy Ministry Secretary B.M.S. Batagoda sent last month to the Chairman and General Manager of the Ceylon Electricity Board (CEB). The Sunday Times saw a copy of the letter.

A joint memorandum was then put forward by Power and Energy Minister Ranjith Siyambalapitiya and Special Assignments Minister Sarath Amunugama to expedite and request Cabinet approval for the CEB to call the tender based on the Korean proposal under a “Swiss Challenge” concept.

Dr Batagoda said the Cabinet of Ministers has now given approval for the CEB to call tenders for the purchase of LNG for existing power plants and upcoming 300MW power plant based on a Swiss Challenge concept using the Korean proposal. “Since this is (a) new experience for the CEB, we suggest that that the CEB shall create a new unit under the thermal complex to purchase LNG for thermal power plants,” he noted. “The CEB will only purchase LNG. Terminal management structure can be decided separately.”

The Secretary also instructs the CEB management to appoint a Technical Evaluation Committee for the proposal. But the Sunday Times confirmed this week that it has not yet been done, amidst internal fears that the large number of LNG proposals before the Government will lead to “dumping”.

There are at least three separate unsolicited bids for LNG terminals under consideration. The joint Siyambalapitiya-Amunugama cabinet memorandum sought Cabinet approval to call international bids by the CEB for procurement of natural gas for power plants of 1,000mw by adopting the Swiss Challenge procurement method based on the proposal submitted by SK E&S Company backed by the Korean Government.
It also sought approval to invite the Japanese and Indian companies which have submitted proposals for the construction of LNG terminals in Sri Lanka; and the proposed Sri Lanka, India and Japan joint venture company to be established to participate and submit proposals to this tender under Swiss Challenge method collectively or separately.

Finally, the Cabinet has already sanctioned the building of a 400mw LNG power plant and terminal in Hambantota as a combined project by China Machinery Engineering Corporation and the CEB.

The Korean proposal has the suggested starting date for the LNG sale and purchase agreement (SPA) as the second half of 2020, ending on March 31, 2040. The annual contract quantity is specified as either 500,000mt a year or one million mt. The primary sources of LNG will be the seller’s global LNG sourcing portfolio.

The floating storage regasification unit (FSRU) will be provided free-of-charge; the LNG pipeline will be funded by the Sri Lanka Government and, if necessary, SK E&S will provide technology for pipeline engineering, construction and operation. The LNG price is to be at competitive level, “considering that FSRU is free of charge”.

The terms of the contract will be “Take or Pay”: The buyer either takes the product from the supplier or pays the supplier a penalty. The SK E&S proposal says, “If Buyer fails to take any scheduled cargo, Buyer shall pay Seller an amount equal to the Contract Price multiplied by the quantity which Buyer failed to take”.